Parkland teens and other survivors react to the latest shooting. America, take note. 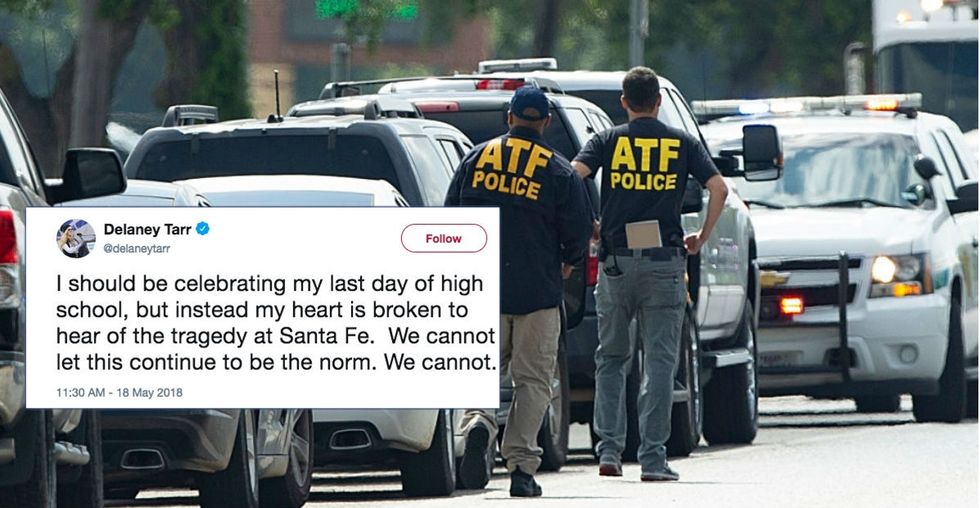 It's happened again. Another American community is reeling after another mass school shooting.

Events are still developing at Santa Fe High School in Texas, where on Friday, May 18, 2018, an estimated 10 people died in a mass shooting.

It is reportedly the 22nd school shooting in America in 2018 so far.

The reactions have been swift and to the point: This needs to stop.

I should be celebrating my last day of high school, but instead my heart is broken to hear of the tragedy at Santa… https://t.co/FedNoJVocJ
— Delaney Tarr (@Delaney Tarr)1526657433.0

My statement on the latest mass murder of American children, this time in #SantaFe, Texas. This must stop. https://t.co/gtkCjLzPWv
— Mike Rawlings (@Mike Rawlings)1526662480.0

Kids in #SantaFe went to school this morning and won’t ever come home. They won't hug their parents, or fight with… https://t.co/YUyVfF3qqB
— Seth Moulton (@Seth Moulton)1526662308.0

Again. Again we are heartbroken. Again a preventable tragedy. Our thoughts and prayers are with the Santa Fe victi… https://t.co/UIL2koWPEr
— Tom Perez (@Tom Perez)1526664160.0

When one Santa Fe High School student was asked if she thought a school shooting would never happen to her in her life, her blunt and painfully honest response summed up the personal and collective mood right now: "No. It's been happening everywhere. I've always felt it would eventually happen here, too."

One particularly haunting image shows Santa Fe High School students supporting the March for Our Lives rallies just 28 days before their own school would become a target.

As Rep. Ted Lieu (D-California) powerfully wrote on Twitter, "There is nothing wrong about praying for victims & first responders at the school shooting at Santa Fe High School in Texas. We should pray for them. But there is something very wrong if that is all you do."

That sentiment has been echoed across social media with political leaders, celebrities, activists, and more advocating for common sense action on gun violence even as they process their collective grief in real time.

My heart breaks for the students and faculty of Santa Fe High School, and the families of those who lost their live… https://t.co/8f9RbOZqYo
— Elizabeth Warren (@Elizabeth Warren)1526661390.0

As they've done since surviving their own tragedy, Parkland teens turned activists voiced their support.

Santa Fe High, you didn’t deserve this. You deserve peace all your lives, not just after a tombstone saying that is… https://t.co/pzLo1QmxVe
— Emma González (@Emma González)1526658748.0

Senior Sarah Chadwick put herself out there before her more than 300,000 followers, offering to connect directly with Santa Fe students:

To all Santa Fe students and staff, Parkland stands with you and your community. My DMs are open if you’d like to t… https://t.co/wpW8oXjb2N
— Sarah Chadwick (@Sarah Chadwick)1526663066.0

Cameron Kasky was more direct, laying out the stakes for those still organizing for meaningful gun safety reforms.

At least 8 students have been shot and killed at Santa Fe High School. Prepare to watch the NRA boast about gettin… https://t.co/aI53xFV4Zb
— Cameron Kasky (@Cameron Kasky)1526657128.0

Grieve, but don't wait for change.

The epidemic of gun violence in America is all-too-common political talking point. But since February when Parkland students added badges like "leaders" and "activists" to the label of "survivor" and thousands of teenagers like them have stepped up to lead, the push for commonsense gun legislation has never been stronger.

To support them and to join their fight to end school shootings like the one at Santa Fe High, here's what you can do right now: