This Muslim woman confronted anti-Islamic protesters "with love and a smile." 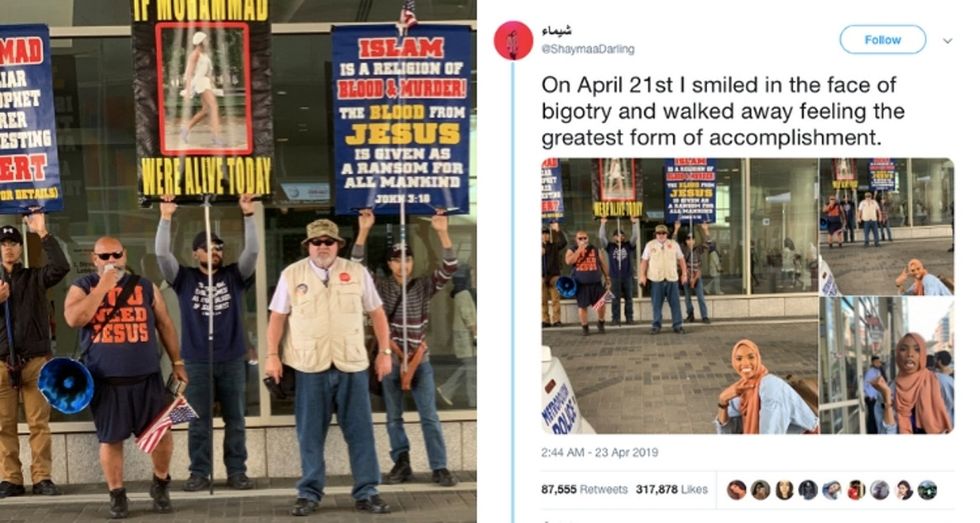 When you're faced with someone spewing hatred toward you, it can be hard to keep calm—much less smile and wave.

Shaymaa Ismaa'eel was attending a 3-day convention for Muslims in Washington, D.C. when she came upon a group of anti-Islamic protesters.

Holding signs with statements like "Islam is a religion of blood & murder" and an inexplicable picture of a man dressed in drag with "If Muhammad were alive today" on it, the bigoted protesters were making a clear statement of hatred. Ismaa'eel told BBC Newsbeat that they used loudspeakers to deliver anti-Islamic messages.

"They had posters with things like, 'Islam is a hateful religion' and were saying we were inside 'listening to hate'," she told Newsbeat.

"I'm the sort of person who finds this stuff funny," she added. "So I was cracking up laughing. I was thinking, 'If only I had a loudspeaker so they could hear what we were doing inside'."

Inside the 44th annual Muslim American Society and the Islamic Circle of North America (MAS-ICNA) convention, thousands of participants were discussing community service and how to be better Muslims. (In other words, not to hate.)

Ismaa'eel decided to bring light and joy to the darkness these protesters were trying to push.

"There's a saying from our Prophet saying, 'Smile is charity' and that's just me personally anyway always smiling," Ismaa'eel said. So she decided to bring that charity to the protesters.

"I asked my friend to take a picture. I wanted them to see me smile and see the love. I wanted to combat their hatred with love and a smile."

On April 21st I smiled in the face of bigotry and walked away feeling the greatest form of accomplishment. https://t.co/Dbrtk7MDAw
— شيماء (@شيماء) 1556012689.0

"As you can see in the picture they seem annoyed but they didn't really respond that much," she added. "Just a quick scoff and they started saying, 'You should cover your face' and 'You can tell it's a cult when the followers are wearing pajamas'."

Ismaa'eel didn't let their negativity deter her, however. She shared her photos on Twitter with the comment, "On April 21st I smiled in the face of bigotry and walked away feeling the greatest form of accomplishment."

Ismaa'eel's post has resonated with people and she's received countless messages of support.

The 24-year-old's tweet has more than 300,000 likes and more than 80,000 retweets. While she appreciates people's messages of support, she said she hasn't experienced many incidences of anti-Islamic hate and is hopeful that they are decreasing.

"I think people are way more accepting," she told Newsbeat. "You see more people like me, wearing hijabs. Fashion magazines with Muslim women. You didn't see that when I was younger."

Ismaa'eel didn't expect her post to go viral, but she's glad that it has resonated with people.

"I'm all about being unapologetic about who you are," Ismaa'eel said. "Don't let anyone dim your light."