This man's encounter with border patrol should have us all brushing up on our legal rights. 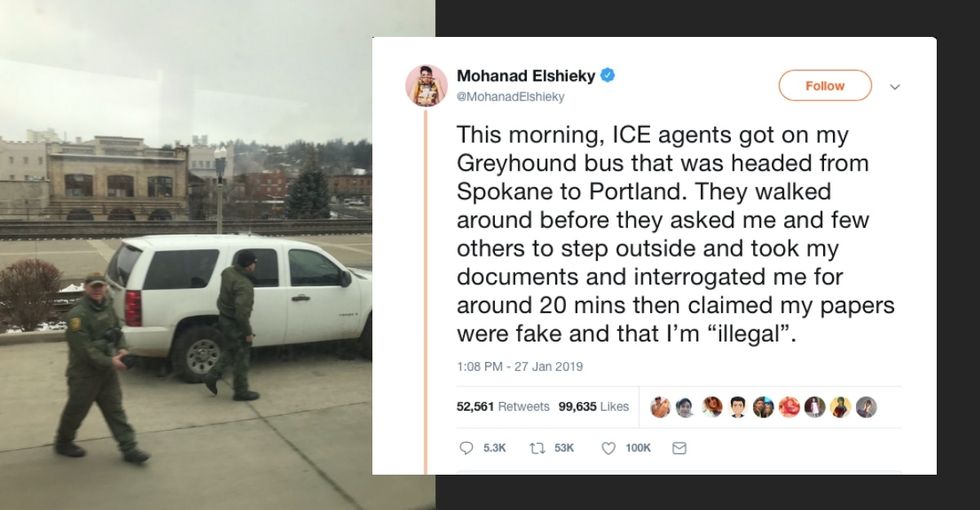 Mohanad Elshieky is a stand-up comedian originally from Benghazi, Libya (yes, that Benghazi) but is living in Portland Oregon. Elshieky told  Willamette Week that he was officially granted political asylum in the U.S. in October 2018, which makes him a legal resident of the United States.

However, that status appeared to not matter to the immigration officials who allegedly boarded the bus Elshieky was on this weekend.

"This morning," Elshieky wrote on Twitter, "ICE agents got on my Greyhound bus that was headed from Spokane to Portland. They walked around before they asked me and few others to step outside and took my documents and interrogated me for around 20 mins then claimed my papers were fake and that I’m 'illegal'."

"I explained to them that I was granted Asylum here in the United States," he continued, "and that the work permit they currently hold and the license are impossible to get unless your presence here is legal. They told me that I was lying and these could pretty much be falsified."

I explained to them that I was granted Asylum here in the United States, and that the work permit they currently ho… https://t.co/a6wSxj7TGF
— Mohanad Elshieky (@Mohanad Elshieky) 1548623358.0

Elshieky provided his documentation, but the border patrol agents insisted that he was "illegal."

Elshieky wrote that the agents called immigration to verify his information, and he could hear the person on the phone say that he was in the country legally. But, he said, "The ICE agent ended the call and then said 'there are no records of your Asylum' and I again said that was impossible. Then said I should had my Asylum approval on me which is ridiculous, why would I carry that where I have my IDs."

The ICE agent ended the call and then said “there are no records of your Asylum” and I again said that was impossib… https://t.co/iB7b4LhtD0
— Mohanad Elshieky (@Mohanad Elshieky) 1548623402.0

Elshieky told Willamette Week that his immigration lawyer had told him that carrying his ID and his work permit would be sufficient for proving his legal status if it ever came up. But the agents were unrelenting, insisting that he needed different "papers."

Another ICE agent then started yelling at me to take my hands out of my pockets and I did which is stupid because i… https://t.co/E2MqvgKhF6
— Mohanad Elshieky (@Mohanad Elshieky) 1548623453.0

Elshieky said he'd "never felt as terrible" as he did during the experience—which is saying a lot considering he's an asylee.

This is a man who has been granted asylum, meaning that the U.S. government has determined that it is unsafe for him to be sent back to his home country. And yet, that same government is now allegedly using classic anti-immigrant intimidation tactics to harass him and make him feel unwelcome in his adopted country.

"To be honest, I have never felt as terrible as I did today," he wrote. "I have never imagined that I would have to go through this."

"It was an another reminder that even though I have been here for 5 years working my ass off, I was still considered 'Other,' he wrote, "and I have never felt as alone as I did in that station full of people."

It was an another reminder that even though I have been here for 5 years working my ass off, I was still considered… https://t.co/L5gbXp5ocm
— Mohanad Elshieky (@Mohanad Elshieky) 1548623518.0

Elshieky shared a photo of the agents and discovered that what he originally thought was ICE were likely Customs and Border Patrol agents. The main difference between ICE and CBP is that CBP patrols border areas, whereas ICE operates in all areas of the United States. Spokane, WA is about 120 miles from the Canadian border. (Just outside the standard 100-miles from a border boundary, which is CBP's jurisdiction.)

Some people have brought to my attention that based on the photos I taken, those were CBP and not ICE. Here is a ph… https://t.co/qXT1xvKtDi
— Mohanad Elshieky (@Mohanad Elshieky) 1548639407.0

Stories like this should have us all brushing up on our legal rights—and questioning what we're willing to give up for "security."

If this story is true, it paints a terrifying picture of a government agency with enormous power over the lives of individuals using racial discrimination and intimidation tactics to harass people. Any one of us could be accused of being here illegally, and if we don't have the proper "papers" could be subject to all manner of injustices.

The ACLU has provided an infographic detailing your rights if you are stopped by a border patrol agent. At the very least, Elshieky's story is reminder for us to brush up on those legal protections, both for our own sake and for the people around us.