OK. Huddle up. Here's the deal: Baltimore Ravens linebacker Brendon Ayanbadejo came out in favor of marriage equality. A scared and out-of-touch Maryland state representative, Emmett C. Burns Jr., wrote a letter to the team telling them to shut him up. Another football player, Minnesota Vikings punter Chris Kluwe, wrote an EPIC response letter to Mr. Burns on our favorite sports blog, Deadspin. You can read the original letter and video over there.We took that letter and decided to make it beautiful-er with dazzling illustrations. Because it's awesome. MEDICAL WARNING: Some of the images below are blinky, just FYI. NSFW WARNING: Also, if strong language offends you, bring some smelling salts. 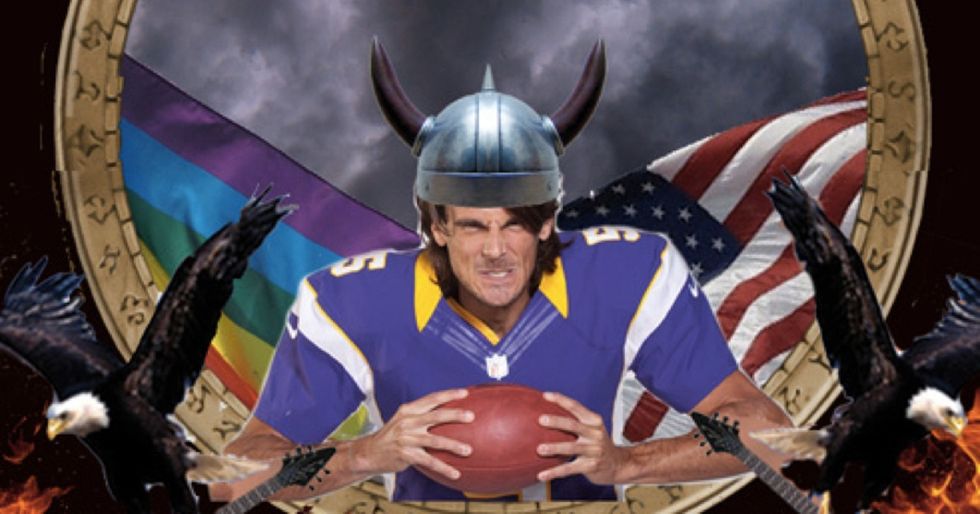 I find it inconceivable that you are an elected official of Maryland's state government. Your vitriolic hatred and bigotry make me ashamed and disgusted to think that you are in any way responsible for shaping policy at any level. The views you espouse neglect to consider several fundamental key points, which I will outline in great detail (you may want to hire an intern to help you with the longer words):

1. As I suspect you have not read the Constitution, I would like to remind you that the very first, the VERY FIRST Amendment in this founding document deals with the freedom of speech, particularly the abridgment of said freedom. By using your position as an elected official (when referring to your constituents so as to implicitly threaten the Ravens organization) to state that the Ravens should "inhibit such expressions from your employees," more specifically Brendon Ayanbadejo, not only are you clearly violating the First Amendment, you also come across as a narcissistic fromunda stain. What on earth would possess you to be so mind-boggingly stupid? It baffles me that a man such as yourself, a man who relies on that same First Amendment to pursue your own religious studies without fear of persecution from the state, could somehow justify stifling another person's right to speech. To call that hypocritical would be to do a disservice to the word. Mindfucking obscenely hypocritical starts to approach it a little bit.

2. "Many of your fans are opposed to such a view and feel it has no place in a sport that is strictly for pride, entertainment, and excitement." Holy fucking shitballs.

Did you seriously just say that, as someone who's "deeply involved in government task forces on the legacy of slavery in Maryland"? Have you not heard of Kenny Washington? Jackie Robinson? As recently as 1962 the NFL still had segregation, which was only done away with by brave athletes and coaches daring to speak their mind and do the right thing, and you're going to say that political views have "no place in a sport"?

I can't even begin to fathom the cognitive dissonance that must be coursing through your rapidly addled mind right now; the mental gymnastics your brain has to tortuously contort itself through to make such a preposterous statement are surely worthy of an Olympic gold medal (the Russian judge gives you a 10 for "beautiful oppressionism").

3. This is more a personal quibble of mine, but why do you hate freedom? Why do you hate the fact that other people want a chance to live their lives and be happy, even though they may believe in something different than you, or act different than you? How does gay marriage, in any way shape or form, affect your life? If gay marriage becomes legal, are you worried that all of a sudden you'll start thinking about penis? "Oh shit. Gay marriage just passed. Gotta get me some of that hot dong action!" Will all of your friends suddenly turn gay and refuse to come to your Sunday Ticket grill-outs? (Unlikely, since gay people enjoy watching football too.)

I can assure you that gay people getting married will have zero effect on your life.

They won't come into your house and steal your children. They won't magically turn you into a lustful cockmonster.


You know what having these rights will make gays? Full-fledged American citizens just like everyone else, with the freedom to pursue happiness and all that entails. Do the civil-rights struggles of the past 200 years mean absolutely nothing to you?

In closing, I would like to say that I hope this letter, in some small way, causes you to reflect upon the magnitude of the colossal foot in mouth clusterfuck you so brazenly unleashed on a man whose only crime was speaking out for something he believed in.

Best of luck in the next election; I'm fairly certain you might need it.

P.S. I've also been vocal as hell about the issue of gay marriage so you can take your "I know of no other NFL player who has done what Mr. Ayanbadejo is doing" and shove it in your close-minded, totally lacking in empathy piehole and choke on it. Asshole.

UPDATE: On January 2, 2014, Chris Kluwe wrote an open letter with the headline "I Was An NFL Player Until I Was Fired By Two Cowards And A Bigot" about why he was let go from the Vikings (which happened last year). What he said, if proven true, is pretty outrageous.