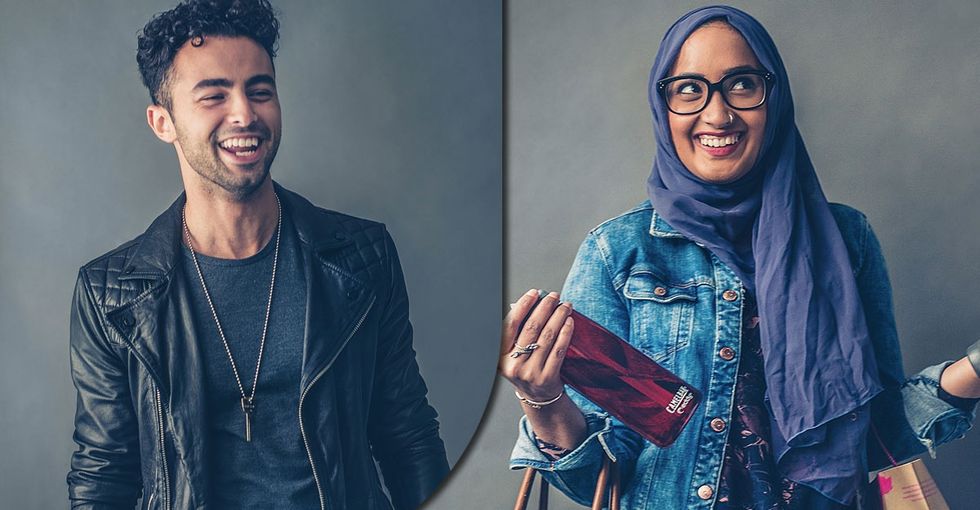 As a professional photographer, Mark Bennington looks at thousands of photographs a day. But there was something he wasn't seeing.

The 47-year-old Bennington rarely saw images in the news or media that showcased Muslim people smiling, laughing, having fun, or simply being themselves. Instead, they're often portrayed as sullen, serious, or even violent. The canon of images do little to show the full spectrum of emotions and needs of Muslim people.

Muslims meet with an immigration attorney during a town hall meeting in Virginia. Photo by Paul J. Richards/AFP/Getty Images.

Lack of positive, affirming representation can stoke the flames of anti-Muslim representation, which can lead to more negative portrayals in the media. It's a vicious cycle with serious consequences.

Bennington, like many people, desperately wanted to change the conversation and highlight the people behind Islam, a religion of kindness, love, and peace.

In the summer of 2016, after reading a piece in The New York Times documenting a Muslim family in New York, Bennington was inspired by the photography of photojournalist Chang Lee, who had captured the images. This was a Muslim family simply living their lives, and Bennington wanted to see more of it.

"I really thought, let me see if I can do something here and get some images that would normalize that dialogue," he says.

So Bennington decided to use his art to help change the conversation.

Bennington took a circuitous path to find his subjects, reaching out through Muslim friends and friends of friends. He was finally introduced to students in a Muslim student group at a local high school who were excited to take part in the project.

All photos by Mark Bennington for "America 2.0" unless otherwise noted. Photos used with permission.

"It just so happened that when I was reaching out to the community, the response back was from the youth," Bennington says. "My original intention was not to focus on youth, but that's who responded back."

It's a picture-perfect celebration of what it means to be a part of the next generation of leaders of a country at a crossroads.

"This is next gen America — that just happened to be Muslim," Bennington says. "This is a community that deserves representation and deserves to be celebrated."

So far, Bennington has taken around 50 portraits for "America 2.0," and he's not done yet.

Along the way, he's met Muslim people of a variety of different backgrounds. Some were raised in the faith; some converted. Some of the young women wear hijabs; others don't. Each young person is unique, joyful, and determined — exactly what we need in strong leaders.

He hopes to travel around the country taking more pictures for the project. He's currently considering crowdfunding for an outdoor exhibition in Washington, D.C.

No matter your faith or background, it's important to stand with Muslims against hate, harmful rhetoric, and violence.

Bigotry and discrimination against the Muslim community is not OK, and it's not normal. Now more than ever, we need to support Muslim people in our community by signal-boosting the voices that are making a difference and shouting down anti-Muslim rhetoric.

People with or without faith traditions should have a safe place to reflect or worship, smile, laugh, and be themselves in every corner of the country.

And until that's true, we've all got work to do.