This comedian absolutely shredded a heckler who got mad at him for supporting Bernie Sanders. 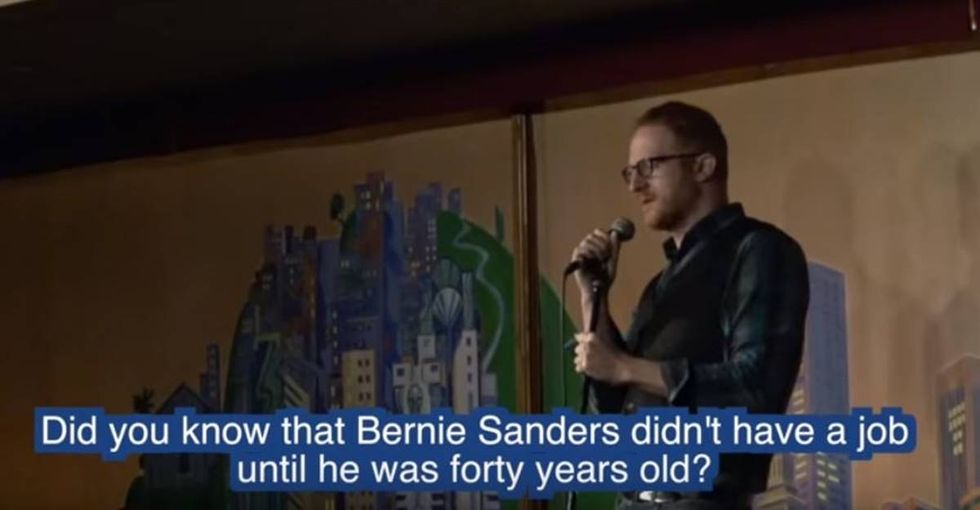 The two butted heads recently at the San Francisco Punchline when comedian Steve Hofstetter made a political joke about the 2016 election.

Hofstetter supported Bernie Sanders in the Democratic primary and voted for Hillary Clinton in the presidential election versus Donald Trump.

“I’m a Mets fan. Love the Mets. Hate the Braves,” he said. “But if the Braves were ever in the World Series against Isis, go Braves!”

In a question-and-answer session after his set, a man in the audience told Hofstetter that Sanders never held a job until he was 40 years old. While his point seemed to come from nowhere, it’s actually a commonly-held belief in the right-wing bubble.

It’s mentioned in the American Spectator here and debunked here.

The narrative that Bernie Sanders couldn’t fend for himself as an adult feeds into the stereotype that Democratic Socialists are simply people who want to mooch off of hard-working Americans. Which is far from the truth.

So Hofstetter pulled out his phone, Googled Bernie Sanders’ employment history and found that he was gainfully employed shortly after he left college. “[The audience member] asked his question in a very ‘I am smarter than you!’ way,” Hofstetter told Upworthy.

“I figured if I could publicly show him he wasn’t, maybe he’d actually learn something,” he continued. “And he was so ridiculously far from the truth, I knew that bringing up the truth would be hilarious.”

The exchange is a perfect example of confirmation bias, the psychological concept that people seek out information that supports their chosen worldview while dismissing information that challenges it.

“This guy wants to believe that Bernie Sanders is some sort of free-loading slacker, so when he heard this ridiculously dumb urban legend that supported his viewpoint, he just accepted it as truth,” Hofstetter told Upworthy.

“If he actually took the 30 seconds to Google it, he’d have to confront his world view," Hofstetter continued. "Instead, he just repeats the fiction, as that is easier for his ego.”