These neighbors hung up 40 rainbow flags when a gay couple's house was vandalized.

"Never doubt that a small group of thoughtful, committed citizens can change the world. Indeed, it's the only thing that ever has." — Margaret Mead 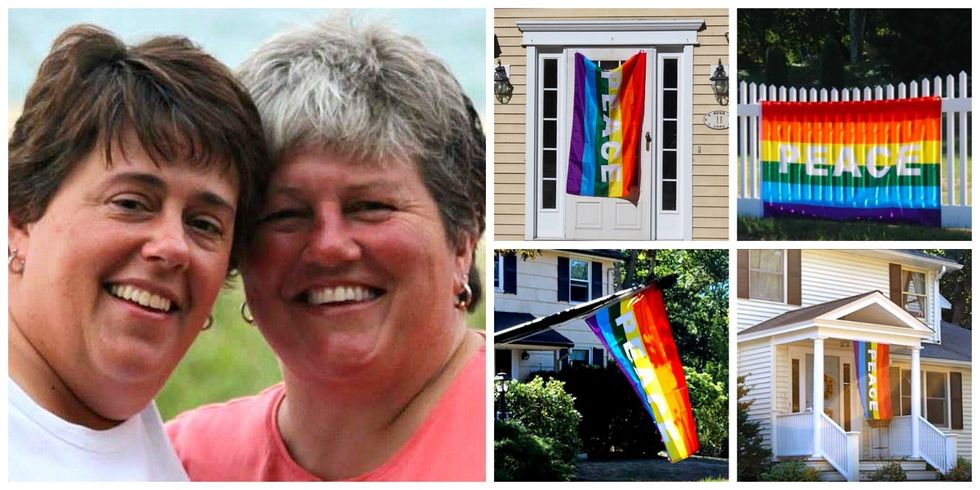 After a restful vacation, Cari and Lauri Ryding returned to a disturbing sight at their home in South Natick, Massachusetts — their porch had been egged, and their rainbow pride flag was gone.

"We were both disillusioned and confused.  We didn't want to believe that it was an attack on us," Cari wrote in an email.

The couple had gotten their pride flag several weeks earlier from Rainbow Peace Flag Project — an organization that distributes rainbow flags with the word "PEACE" on them to the Natick and MetroWest areas for free in the name of peace.

The flag was meant to be a symbol of love and solidarity in the wake of the tragic Pulse shooting in Orlando in June but had inspired an act of vandalism — presumably from someone with homophobic views.

Cari has lived on the same street in South Natick for 23 years. Even when she separated from her husband and later married Lauri, she always felt she had unwavering support from her neighbors, which made the incident all the more difficult to comprehend.

Their neighbors, however, refused to let that act of vandalism be the end of the story.

They decided to show Cari and Lauri that they would always stand behind them. Their neighbors immediately contacted the Rainbow Peace Flag organization and ordered numerous flags.

One by one, the rainbow flags began popping up all over the neighborhood — until 40 houses were showcasing them proudly.

"We were not surprised that the neighbors responded, but we were surprised by how many did. People that we didn't know well got into action," wrote Cari.

According to Cari, local kids delivered the flags to all their neighbors on their bikes, stopping by Cari and Lauri's last. The couple gave them a tearful "thank you."

This colorful act of solidarity proves hate is no match for love in small communities like this. It's also a shining example of what the rainbow flag is meant to do.

Any fear Cari and Lauri might've felt as a result of this hateful act of vandalism was quelled by the ever-growing support they've received.

Several religious organizations are standing behind them, and more and more people in the Natick area and beyond are ordering rainbow flags to show they're part of the unified front. The response has filled the couple with an overwhelming hope for a better future for the LGBTQ community.

And to think it all started when a few small-town people refused to let their neighbors be knocked down.

As Cari put it succinctly, "The actions of a few people can change things, and inspire the world."