The story behind Michelle Obama's state dinner dress makes it even more stunning. 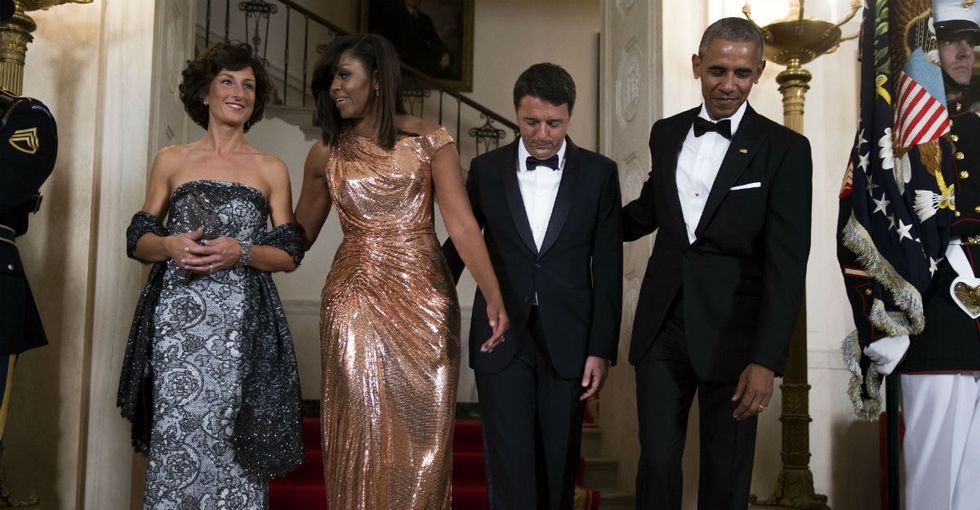 For the very last time, President Obama and the first lady hosted a state dinner in Washington, D.C., on Oct. 18, 2016.

They graciously welcomed Italian Prime Minister Matteo Renzi and his wife, Agnese Landini, to the White House with open arms.

And the two power couples showed the world why diplomacy is certainly the most fashionable way to go about foreign policy, that's for sure.

Unsurprisingly, however, it was FLOTUS' dress that really got people talking.

Because, yes, it was downright stunning.

But the story behind why the first lady chose to wear it makes it an even more beautiful look.

The dress by Donatella Versace — who famously rescued her brother's company and turned it into a thriving Italian brand amid doubts she'd be able to do so — was a nod to the visiting prime minister and his wife. But Michelle Obama's choice to wear the rose gold shimmering waterfall of a gown had an even more underlying feminist message behind it, according to The New York Times.

Michelle Obama's dress was made of chainmail — metal armor, essentially. And that speaks volumes about the type of message she wanted to send.

The gown was symbolic of female strength — a testament to the resiliency of a woman willing to fight for her beliefs and protect herself from bullies that might come along the way.

"When they go low, we go high," the first lady said on stage at the Democratic National Convention this past summer.

Her dress from Tuesday night summed that message up quite nicely.

The first lady rocked the Versace gown in the wake of what's being called "the most powerful speech of the 2016 campaign" — an address she gave to voters in New Hampshire about the dire need to respect girls and women.

“I can’t stop thinking about this," she said during her speech, citing Donald Trump's discussion of sexual assault caught on tape. "It has shaken to me to my core in a way that I couldn’t have predicted.”

"I have to tell you that I listen to all of this and I feel it so personally, and I’m sure that many of you do too, particularly the women," the first lady said. "The shameful comments about our bodies. The disrespect of our ambitions and intellect. The belief that you can do anything you want to a woman."

“I know it’s a campaign, but this isn’t about politics. It’s about basic human decency. It’s about right and wrong,” she concluded. “And we simply cannot endure this, or expose our children to this any longer — not for another minute, and let alone for four years. Now is the time for all of us to stand up and say enough is enough."

Like other first ladies before her, Michelle Obama often wears gowns that send a message above and beyond aesthetics.

Her royal blue dress at the Democratic National Convention, for example, was designed by Christian Siriano, an artist recognized for body positivity and inclusiveness within the fashion industry. Its sentiments fell in line with her powerful speech illustrating the value of national togetherness.

In 2009, when she wore a white gown by designer Jason Wu to the president's Inaugural Ball, it was chosen as a show of hope and refreshed optimism — turning the page, in a sense, as the country struggled to climb out of the Great Recession.

Michelle Obama's last state dinner is a tough pill to swallow for the many Americans who saw her as so much more than your standard first lady.

Much like her dress for this last state dinner, Obama's time in the White House represents what many of us aspire to be: strong, hopeful, and, even in the face of the most difficult of circumstances, having the ability to stay true to yourself.

Writing for The New York Times magazine, Chimamanda Ngozi Adichie perfectly explained how the first lady's grit and resolve in the face of opposition shaped her into nothing short of an icon:

"The insults, those barefaced and those adorned as jokes, the acidic scrutiny, the manufactured scandals, the base questioning of legitimacy, the tone of disrespect, so ubiquitous, so casual. She had faced them, and sometimes she hurt and sometimes she blinked, but throughout, she remained herself."

So, yeah. After eight years of being the first lady, chain mail was the perfect choice.