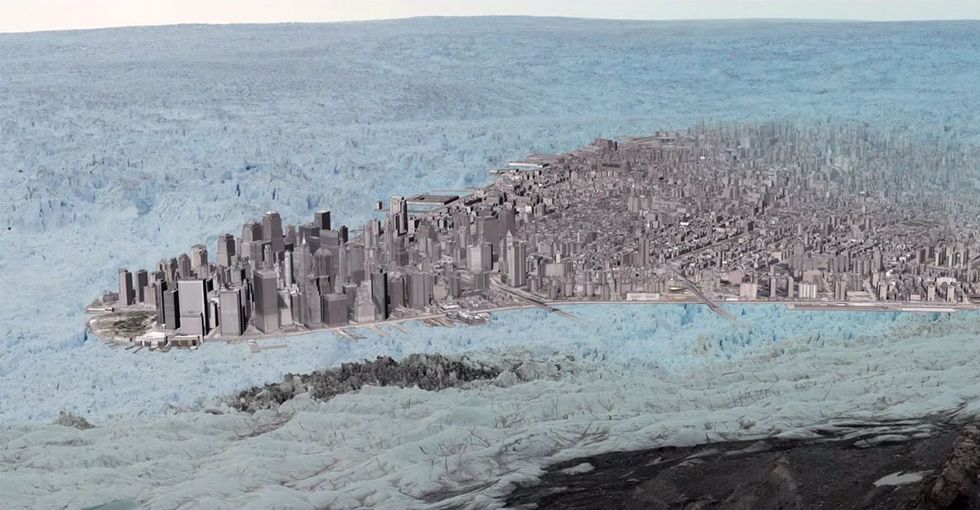 All GIFs and images via Exposure Labs.

Photographer James Balog and his crew were hanging out near a glacier when their camera captured something extraordinary.

They were in Greenland, gathering footage from the time-lapse they'd positioned all around the Arctic Circle for the last several years.

They were also there to shoot scenes for a documentary. And while they were hoping to capture some cool moments on camera, no one expected a huge chunk of a glacier to snap clean off and slide into the ocean right in front of their eyes.

It was the largest such event ever filmed.

For nearly an hour and 15 minutes, Balog and his crew stood by and watched as a piece of ice the size of lower Manhattan — but with ice-equivalent buildings that were two to three times taller than that — simply melted away.

As far as anyone knows, this was an unprecedented geological catastrophe and they caught the entire thing on tape. It won't be the last time something like this happens either.

But once upon a time, Balog was openly skeptical about that "global warming" thing.

Balog had a reputation since the early 1980s as a conservationist and environmental photographer. And for nearly 20 years, he'd scoffed at the climate change heralds shouting, "The sky is falling! The sky is falling!"

"I didn't think that humans were capable of changing the basic physics and chemistry of this entire, huge planet. It didn't seem probable, it didn't seem possible," he explained in the 2012 documentary film "Chasing Ice."

There was too much margin of error in the computer simulations, too many other pressing problems to address about our beautiful planet. As far as he was concerned, these melodramatic doomsayers were distracting from the real issues.

In fact, it wasn't until 2005 that Balog became a believer.

He was sent on a photo expedition of the Arctic by National Geographic, and that first northern trip was more than enough to see the damage for himself.

"It was about actual tangible physical evidence that was preserved in the ice cores of Greenland and Antarctica," he said in a 2012 interview with ThinkProgress. "That was really the smoking gun showing how far outside normal, natural variation the world has become. And that's when I started to really get the message that this was something consequential and serious and needed to be dealt with."

Some of that evidence may have been the fact that more Arctic landmass has melted away in the last 20 years than the previous 10,000 years.

Here's the entire video of the crumbling glacier.

This rare footage has gone on record as the largest glacier calving event ever captured on film, by the 2016 Guiness Book of World Records. On May 28, 2008, ...
Family