The fascinating way a horse reacts when it knows you’re angry.

A new study sheds light on our four-legged friends. 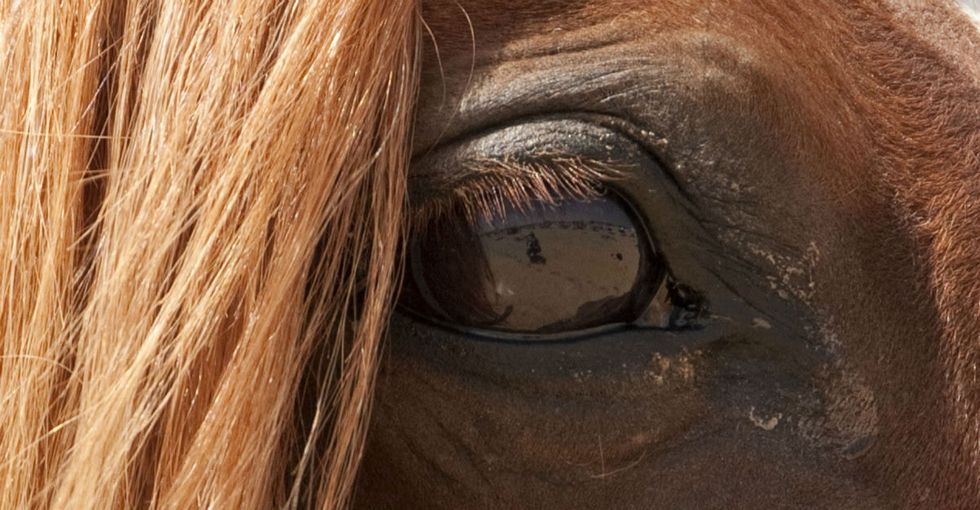 Has a horse ever given you major side-eye?

Because if so, it might not have just been in your head.

According to a groundbreaking new study, horses can read our emotions much better than we previously thought.

And their eyes do a lot of their talking.

The new study, out of the University of Sussex in the U.K., analyzed responses from 28 horses when they were shown large photos of people making either angry or happy faces for 30 seconds.

When the horses were shown angry faces, their heart rates increased significantly. They also moved their heads to look at the angry photos through their left eye — a key sign that showed researchers the horses were perceiving a negative stimuli.

So, yeah, you're right — even though that horse gave you that look that one time, it probably wasn't throwing shade Mariah-style. But researchers are confident that this left-eye thing means horses can read human emotion pretty damn well.

To understand this left-eye phenomenon, you've got to understand how the right and left brain works.

Many species (like horses) process what their left eye is seeing in the right hemisphere of their brain. And that's where the brain processes threatening stimuli, researchers noted.

So horses looking at the angry faces with their left eye suggests that they could tell the person in the photo might pose a threat to them.

“It’s interesting to note that the horses had a strong reaction to the negative expressions, but less so to the positive," researcher Amy Smith, a doctoral student at the university, said in a statement of the findings. "This may be because it is particularly important for animals to recognize threats in their environment. In this context, recognizing angry faces may act as a warning system, allowing horses to anticipate negative human behavior such as rough handling.”

The research isn't just cool — it uncovered a big "first." And it says a lot about how emotionally intelligent horses actually are.

The fact horses can read the facial expressions of another species is a pretty big deal.

"We have known for a long time that horses are a socially sophisticated species," Smith said. "But this is the first time we have seen that they can distinguish between positive and negative human facial expressions."

These findings also come on the heels of another study published last summer that discovered horses wear their moods on their faces. You've just got to keep your eyes peeled.

As CNN reported, that study found that horses have 17 various subtle facial expressions that can indicate mood — one more than dogs and four more than chimpanzees.

"It was previously thought that humans possessed the most complex repertoire of facial expressions, and that ... the further away an animal was from humans, the more rudimentary their use of facial expressions would be," researchers wrote. "However ... it is apparent that horses also have an extensive range of facial movements, sharing many ... with humans and other animals."

It seems like the more we understand about these four-legged beauties, the more fascinating they become.

They're downright stunning, super adorable while splashing in water for the first time, and have surprisingly high emotional IQs. What are we going to learn next?