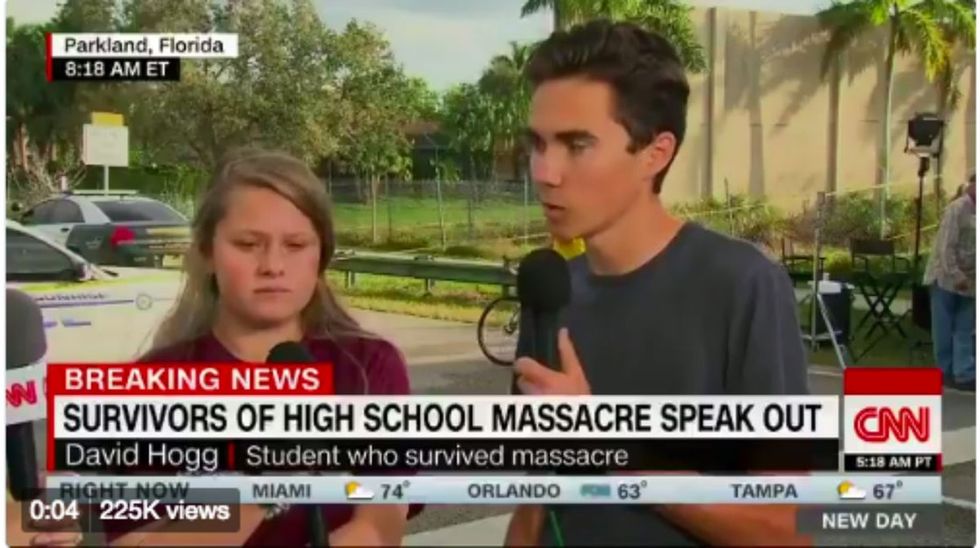 The adults have had their chance. Now it's time to hear directly from kids about school shootings.

After the 18th confirmed school shooting in 2018, it can be hard to find new ways to confront how the previously unthinkable has become a regular part of our lives.

Lawmakers in Congress were already speaking of a "sense of resignation" following the Marjory Stoneman Douglas High School shooting on Feb. 14, after recent massacres like that in Las Vegas failed to generate legislative action.

So the young survivors of Wednesday's mass shooting took on that responsibility themselves, speaking out about the importance of gun safety.

"Some of our policymakers and some people need ... to look in the mirror and take some action; because ideas are great, but without action, ideas stay ideas and children die," senior David Hogg, 17, said in an interview with CNN.

Student David Hogg who survived the school shooting looks directly in the camera, and sends a message to President… https://t.co/EiWsDvFxq9
— CNN (@CNN)1518702912.0

And Hogg isn't alone. After President Trump tweeted about the shootings, a number of fellow Douglas survivors took to Twitter to refute the idea that school shootings are purely a mental health issue.

why was a student able to terrorize my school mr president https://t.co/rwDRYz3ayx
— Nikhita Nookala (@Nikhita Nookala)1518641571.0

A gun has killed 17 of my fellow classmates. A gun has traumatized my friends. My entire school, traumatized from t… https://t.co/efkOeXyock
— Kyra Parrow (@Kyra Parrow)1518673688.0

These aren't kids used as political props. They are smart teens with real thoughts.

Bringing kids into a political debate can be complicated, even when it's for a message we agree with. But that's not what happened here.

The student survivors of Marjory Stoneman Douglas High School took action on their own, sending a powerful message to lawmakers that they can no longer rest on the sidelines while children continue to die from gun violence.

"I want to show these people exactly what's going on when these children are facing bullets flying through classrooms and students are dying trying to get an education," Hogg told CNN. "That's not OK, and that's not acceptable, and we need to fix that."

If the adults can't take action, maybe they'll listen to the survivors.

The grownups have been locked in a gun safety stalemate that shows no sign of letting up. Even common-sense changes — like expanded background checks — that have near-universal support stall in Congress, thanks, in large part, to the powerful lobbying efforts of the National Rifle Association.

It's easy to ignore people on the other side of the political aisle.

It's not easy to ignore children who just watched their fellow classmates die while also facing down their own deaths.

Rep. Ted Deutch (D-FL) followed Hogg's interview on CNN and said that Hogg and his classmate Kelsey Friend confronted him directly with a challenge:

"When they were leaving, I went to tell them how brave I thought they were, and [Hogg] looked at me and he said, 'We want action.'"