Trump misses the mark on his gun response, and we deserve better.

It's time for more than just "thoughts and prayers." 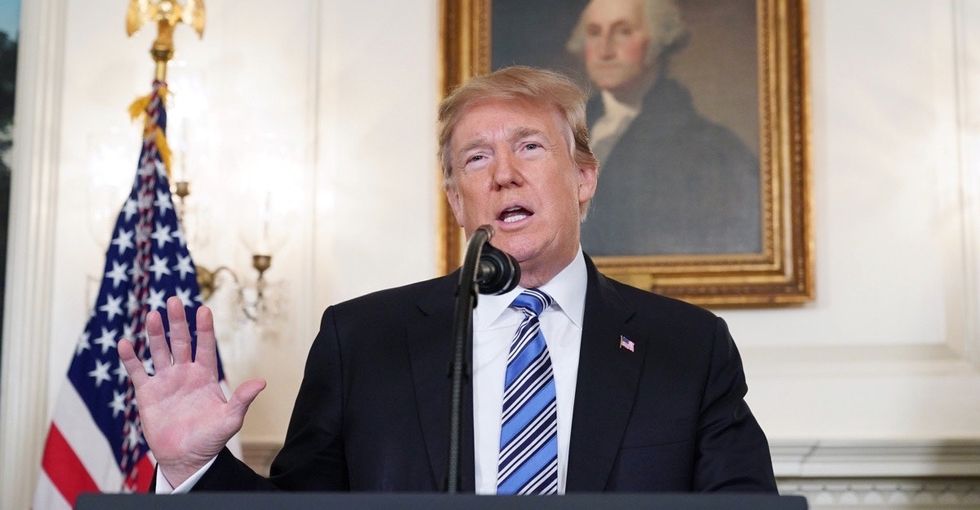 On Feb. 14, a former student walked into Parkland, Florida's Marjory Stoneman Douglas High School, where he shot and killed 17 people.

It was the 18th school shooting in this year's first 45 days. Like a number of other recent shootings, the gunman used a highly customizable AR-15 semi-automatic rifle. Like many more, the shooter had a history of domestic violence.

In an interview with the Daily Beast, classmates of the suspect, 19-year-old Nikolas Cruz, described him as “creepy and weird" and an "outcast" known for spreading anti-Muslim hate and wearing President Trump's ubiquitous "Make America Great Again" hat.

When it came time to address the country in the wake of this tragedy, Trump did what many politicians do in these situations: He blamed mental illness.

"So many signs that the Florida shooter was mentally disturbed, even expelled from school for bad and erratic behavior," Trump tweeted Thursday morning. "Neighbors and classmates knew he was a big problem. Must always report such instances to authorities, again and again!"

So many signs that the Florida shooter was mentally disturbed, even expelled from school for bad and erratic behavi… https://t.co/3mSYrtTng6
— Donald J. Trump (@Donald J. Trump)1518696761.0

But then what? In fact, according to BuzzFeed, the FBI was made aware of Cruz as a potential school shooting threat back in September. Cruz allegedly posted online, "I'm going to be a professional school shooter."

At what point should he have been stopped? Trump placed blame on people for not reporting Cruz to law enforcement, when in fact, he was.

Then there's the matter of mental health.

Trump addressed the county from the White House on Feb. 15, 2018. Photo by AFP/Getty Images.

Speaking from the White House, Trump managed to avoid mentioning the word "gun" in his televised address. Rather, he tossed in a few religious references, saying, "In these moments of heartache and darkness, we hold onto God's word in Scripture: 'I have heard your prayer and seen your tears. I will heal you.'"

He committed to visiting the school sometime in the near future, and said that the country needs to “tackle the difficult issue of mental health."

Gun violence isn't a mental health issue, and even if it were, our government is failing to address "the difficult issue of mental health," generally.

A 2014 study by Drs. Jonathan M. Metzl and Kenneth T. MacLeish set out to explore the connection between mental illness and mass shootings.

Together, Metzl and MacLeish examined four of the major arguments made in the wake of mass shootings: that mental illness causes gun violence, that a psychiatric diagnosis can predict future violence, that we should fear "mentally ill loners," and that gun control won't prevent future mass shootings.

What they found was that mental illness and gun violence have a tenuous connection at best, and that a lot of the rhetoric around that connection is vastly oversimplified.

Once and for all, mental illness and gun violence are statistically **unrelated**. The problem is not people's min… https://t.co/vOHWThdXx4
— Jonathan Metzl (@Jonathan Metzl)1518652623.0

Even if mental health and gun violence shared a convincing causal relationship, the fact is that this administration has repeatedly tried to gut Americans' access to health care — including mental health That leaves us with just two options: Either our politicians don't believe this is actually a mental health issue, or they think it is but don't care enough to fix it.

Neither option is cutting it. We deserve better — so do our kids.

Columbine was 25 fatal school shootings ago. We've done shockingly little to prevent this from happening again. Our collective shrug has created a generation that sees this as a normal part of life.

But even they're not having it anymore. On the morning of Feb. 15, Parkland students Kelsey Friend and David Hogg went on CNN, and pointed out what's painfully obvious about solutions that involve little more than offering "thoughts and prayers" and blaming mental health. "What we need more than [thoughts and prayers] is action," said Hogg.

"We're children," he said. "You guys are the adults. You need to take some action and play a role."

Gun violence is a complex issue, which is why it's so important that it be studied. Unfortunately, we can't even get that right.

In 1996, Republicans in Congress put an end to the Centers for Disease Control and Prevention (CDC)'s studies about gun-related injuries and death. Fearing massive cuts to their overall funding, the CDC agreed to end its gun violence research.

In 2013, President Obama lifted the ban on the CDC's gun violence research. Unfortunately, again fearing backlash from pro-gun members of Congress who control the agency's budget, they've been reluctant to wade back into the divisive issue.

We need action — and we need it now.