Teachers shared how their students feel about the election. The quotes are heartbreaking. 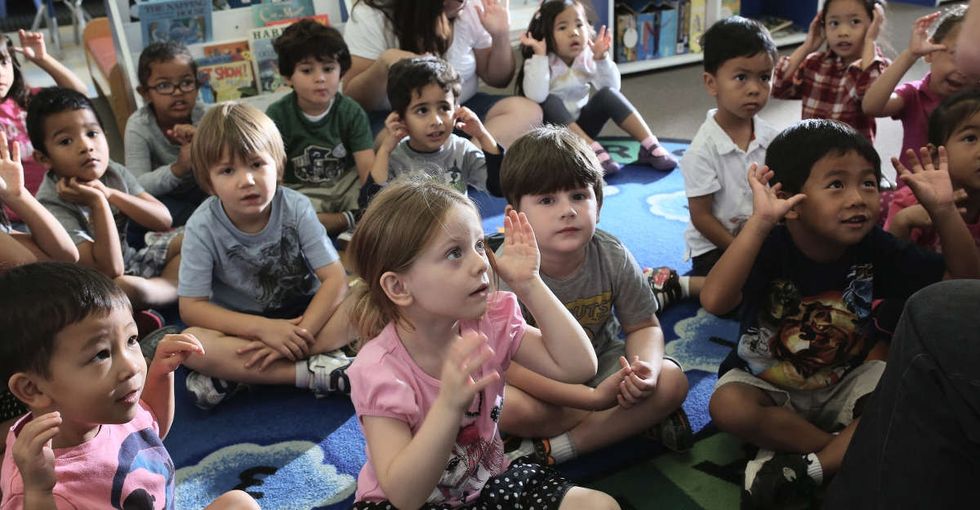 Clap your hands, America! We did it!

Our presidential election is officially scaring the ever-loving bejeezus out of children.

Thanks, in no small part, to this guy:

The Southern Poverty Law Center surveyed 2,000 teachers and school officials about how the 2016 election was affecting their classrooms.

None of the questions on the survey mentioned Trump by name.

But it's pretty much impossible to read the responses without concluding that The Donald is the main nightmare-driver for America's youth, particularly youth of color.

The numbers are scary.

The report found that 67% of the educators questioned reported hearing students of color — Muslims and Latinos especially, but also African-Americans and others — express fear for their and their families' futures after the election was over.

More than 33% reported a general rise in nasty comments about Muslims and immigrants.

"One of my students who is Muslim is worried that he will have to wear a microchip identifying him as Muslim."

More than 40% reported feeling nervous about bringing the election up in class.

The quotes from teachers and school administrators are even scarier than the numbers (all respondents were quoted anonymously).

On how the tone in their classrooms is much, much different this time:

"Kids are asking frightened questions, rather thanpositive ones," one teacher responded.

"The hateful speech of Trump has frightened my eighth graders," said another.

On how students have internalized the bigoted rhetoric emerging from the campaign trail:

"One of my students who isMuslim is worried that he will have to wear a microchipidentifying him as Muslim."

"I have noticed that many of our students, as young as first grade, are asking questions about what may happento their family members that are here without theproper documentation."

"A student has been called terrorist and ISIS. Another was told he would be deported if Trump wins."

On what students of color think their fellow Americans think of them:

"My Hispanic students seem dejected about not only Donald Trump's rhetoric, but also about the amount of people who seem to agree with him. They feel sure that Americans, their fellow students, and even their teachers hate them (regardless of their citizenship)."

"My students are frustrated with the racism andprejudice that is emerging from the presidentialcampaign. They are scared of what will happen andthey feel helpless."

Keep in mind: This is just a small sample of what these teachers and school administers had to say. There are over 200 pages of these kinds of statements. You can go read the whole thing if you want. I'm not sure you want to, but you can.

A couple important caveats about the report:

It's just a single survey and a nonscientific one at that.

The types of teachers who respond to a survey from the SPLC — an organization chartered to fight racism — could be more likely to speak up about injustice and the impact of bigotry on their schools and students than teachers who aren't as tuned in to these issues.

But, win or lose, the Trump campaign's race-based fearmongering has already begun to bleed out into the real world.

Students at an Iowa High School were heard chanting "Trump! Trump!" after losing a basketball game to a school with a higher percentage of Latino students.

A Kansas man allegedly chanted "Trump! Trump! Trump!" while beating a Hispanic man and a Muslim man, after subjecting them to a round of racial slurs.

A black woman was shoved — repeatedly — at a Trump event in Kentucky.

A teenage protestor was pepper-sprayed in the face at a Trump rally in Wisconsin.

A Trump supporter told a group of protestors to "Go to Auschwitz," while giving what appeared to be a Nazi salute.

Two assailants beat up and urinated on a homeless man in Boston while reportedly said, "Trump was right. All these illegals need to be deported."

A Trump speech prompted a young Muslim girl in Texas to fear that the army was going to come and take her family and her away, prompting members of the military to rally to her defense.

It's no wonder our kids are scared.

Even one child frightened is too many. Hundreds is a national disgrace.

Scientific or not, the survey reveals that many, many children — particularly children of color — are indeed frightened about what might happen this November. For good reason. The list of truly terrifying things Trump has said and/or pledged to do is long — and growing.

Liberal or conservative, Republican or Democrat, we owe it to them to stop this guy:

But more than that, we owe it to them to undo the damage Trump has already done by creating space for racist violence and speech to thrive. That means we need to call out hateful, biased rhetoric when we see it, and make it clear that, no matter what our political beliefs are, bigotry has no place in politics.

Once we do that, we can get back to arguing about what really matters.

Not actually what they were really saying. But a man can dream.