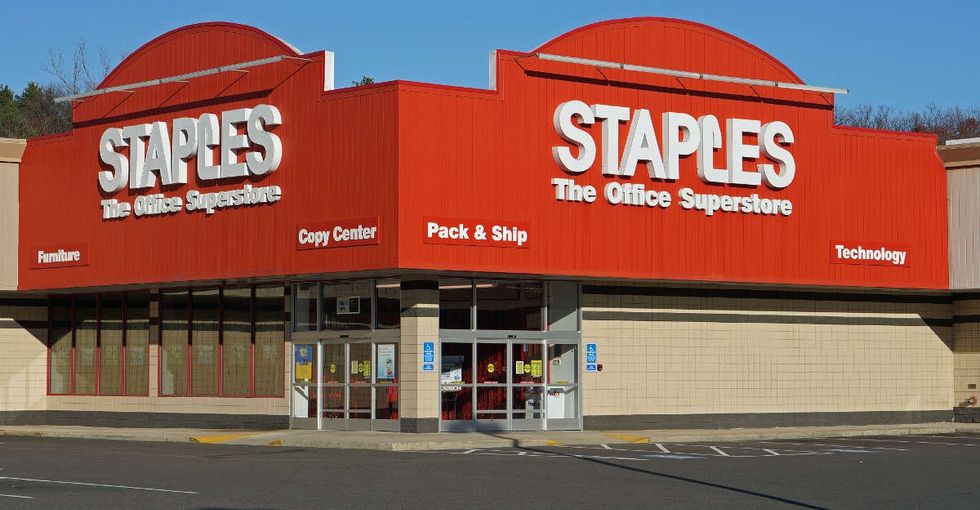 This holiday season, Staples plans to buck a trend that has become all-too-common among major retailers.

In order to get a jump on holiday sales, many mega-retailers like Target, Best Buy, and Kohl's have been opening as early as 5 p.m. on Thanksgiving Day in an attempt to claim a larger and larger share of that sweet, sweet Black Friday cheddar.

That's what I'm talking about. Photo by Guillaume Paumier/Wikimedia Commons.

But this year, Staples is taking a stand against the mad rush for more sales hours.

The office-supply giant has decided to close all of its stores this Thanksgiving Day in order to give its employees some well-deserved time off.

The company announced the plan in a press release Thursday:

“'We want our customers and associates to enjoy Thanksgiving their own way,' said Demos Parneros, president, North American stores and online, Staples. 'On Thanksgiving Day, customers can shop from home on Staples.com and then continue their shopping in stores starting at 6 a.m. on Black Friday."

This could be great news for many overworked Staples employees.

(And terrible news for people who realize — at the very last minute — that they forgot to three-hole-punch their turkey.)

How am I going to put this in a binder now?? Photo by Tim Sackton/Flickr.

But thousands of Staples workers will now have more time to relax with friends and family. And that's a good thing.

For others, who will miss the money they would have made by working on Thanksgiving, having the day off may not be so amazing.

Employees who may have been psyched about making a little extra cash to spend on holiday gifts will probably have to pick up more shifts elsewhere in order to make it happen.

Of course, no one should have to choose between earning enough money to live and ditching their family on the holidays, which is why it's so important that all employees get paid a living wage in the first place — a lesson Staples and other retailers could stand to learn. According to Glassdoor surveys, many front-line Staples employees report earning under $10/hour on average.

But Staples deserves credit for treating their employees like people, not copy-paper sales robots, this holiday season.

Whether out of the goodness of their heart — or simply because Thanksgiving Day sales haven't been all that wonderful across the industry for the last two years — the company should be applauded for making a change that's both good for many of its workers and potentially good for business. Some evidence suggests that more time off is better for employee productivity in the long run. And employee happiness is not nothing either.

When you put it that way, it's a choice that can be summed up in one word:

Now, if you'll excuse me, I'll brb. Got to make sure I Xerox these sweet potatoes in advance.