Some timeless bits of wisdom from Jimmy Carter, now the longest-living president in U.S. history. 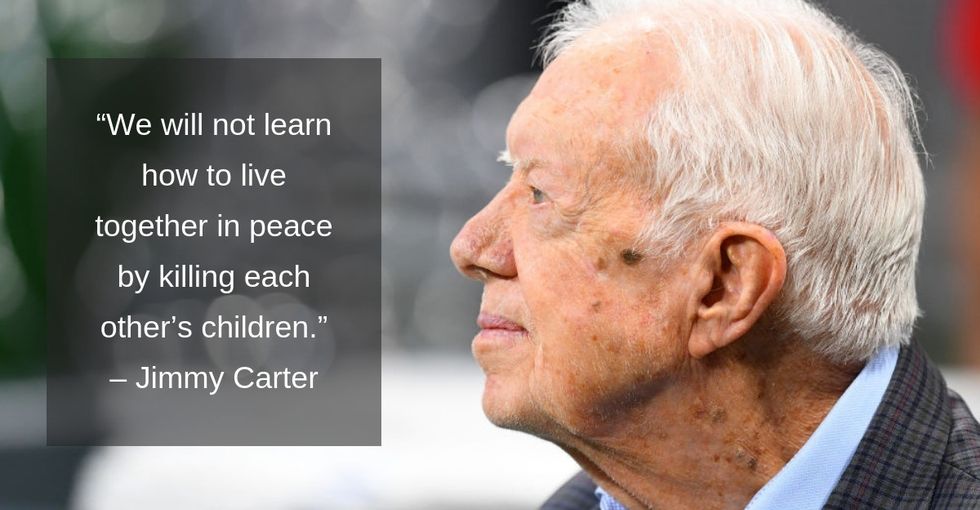 At 94 years and 172 days old, Jimmy Carter is now the longest living president in U.S. history.

In the decades since he left the White House, President Carter has earned the love and respect of masses of Americans for his life of service, voice of compassion, and unwavering integrity. As of March 22, 2019, he is older than President George H.W. Bush was when he passed, officially making Carter the oldest U.S. president to ever live.

And he is certainly not your average nonagenarian; in fact, his age doesn't seem to be slowing him down much at all. In his book, "A Full Life: Reflections at Ninety," he wrote that his later years have been the best time of his life. He's battled cancer and gave everyone a bit of a scare when he collapsed while building a house for Habitat for Humanity two years ago (yes, at 92, he was helping build a house), but it turned out to just be a bit of dehydration. Phew!

Jimmy Carter embodies authentic goodness—a quality we often struggle to find in the world of politics.

People love Carter because all evidence points to him being a genuinely good person. He may not have been the most effective president—a job that's impossible to do perfectly anyhow—but the Nobel Peace Prize winner's dedication to making the world a better place is unquestionable.

President Carter is the kind of man we look to for inspiration and hope in an often dark and cynical world. These words of wisdom he's shared over the decades in speeches, interviews, and books he's written exemplify what makes him so beloved:

His reverence for nature.

"It is good to realize that if love and peace can prevail on earth, and if we can teach our children to honor nature's gifts, the joys and beauties of the outdoors will be here forever."

"Like music and art, love of nature is a common language that can transcend political or social boundaries."

His commitment to peace.

"War may sometimes be a necessary evil. But no matter how necessary, it is always an evil, never a good. We will not learn how to live together in peace by killing each other's children."

"People make a big fuss over you when you're President. But I'm very serious about doing everything I can to make sure that it doesn't go to my head."

"There's always an element of self delusion among people who believe they ought to be President. There's an underestimation of your opponent and an overestimation of your own abilities. This is compatible with being rich and powerful, the idea that we were blessed by God because we deserve to be blessed."

“We should live our lives as though Christ was coming this afternoon.”

“I have one life and one chance to make it count for something... My faith demands that I do whatever I can, wherever I am, whenever I can, for as long as I can with whatever I have to try to make a difference.”

...but also how his faith didn't unduly influence on his politics.

"I think there ought to be a strict separation or wall built between our religious faith and our practice of political authority in office. I don't think the President of the United States should extoll Christianity if he happens to be a Christian at the expense of Judaism, Islam or other faiths."

"If you fear making anyone mad, then you ultimately probe for the lowest common denominator of human achievement."

The way he handled the press.

"I look forward to these confrontations with the press to kind of balance up the nice and pleasant things that come to me as president."

"I've just finished my 20th book this past year and I'm working on my 21st book about the Middle East right now that I'll finish this year. And I get up early in the morning and when I get tired of the computer and tired of doing research, I walk 20 steps out to my woodshop and I either build furniture or paint paintings. I'm an artist too."

His understanding of what really matters.

"In a nation that was proud of hard work, strong families, close-knit communities, and our faith in God, too many of us now tend to worship self-indulgence and consumption. Human identity is no longer defined by what one does, but by what one owns. But we've discovered that owning things and consuming things does not satisfy our longing for meaning. We've learned that piling up material goods cannot fill the emptiness of lives which have no confidence or purpose."

“A strong nation, like a strong person, can afford to be gentle, firm, thoughtful, and restrained. It can afford to extend a helping hand to others. It is a weak nation, like a weak person, that must behave with bluster and boasting and rashness and other signs of insecurity.”

“My hope is that our leaders will capitalize on our country's most admirable qualities. When people in other nations face a challenge or a problem, it would be good for them to look to Washington for assistance or as a sterling example. Our government should be known to be opposed to war, dedicated to the resolution of disputes by peaceful means and whenever possible, eager to accomplish this goal. We should be seen as the unswerving champion of human rights both among our own citizens and within the global community. America should be the focal point around which other nations can rally against threats to the quality of our common environment. We should be willing to lead by example in sharing our great wealth with those in need. Our own society should provide equal opportunity for all citizens and assure that they are provided the basic necessities of life. It would be no sacrifice in exemplifying these traits. Instead, our nation's well being would be enhanced by restoring the trust, admiration and friendship that our nation formerly enjoyed among other peoples. At the same time, all Americans could be united in a common commitment to revive and nourish the political and moral values that we have espoused and sought during the past 240 years.”

Jimmy Carter is a national treasure. Here's hoping we get to keep him around a whole lot longer.

It's a cat toy, people. Deal with it.

Kids have relentless curiosity and imagination galore. That magical quality often catches adults off guard in the most hilarious of ways.

Tennis pro Serena Williams recently posted a video to her TikTok showing her 5-year-old daughter Olympia (who is the spitting image of her mother, by the way) playing with a “toy” for their cat Karma.