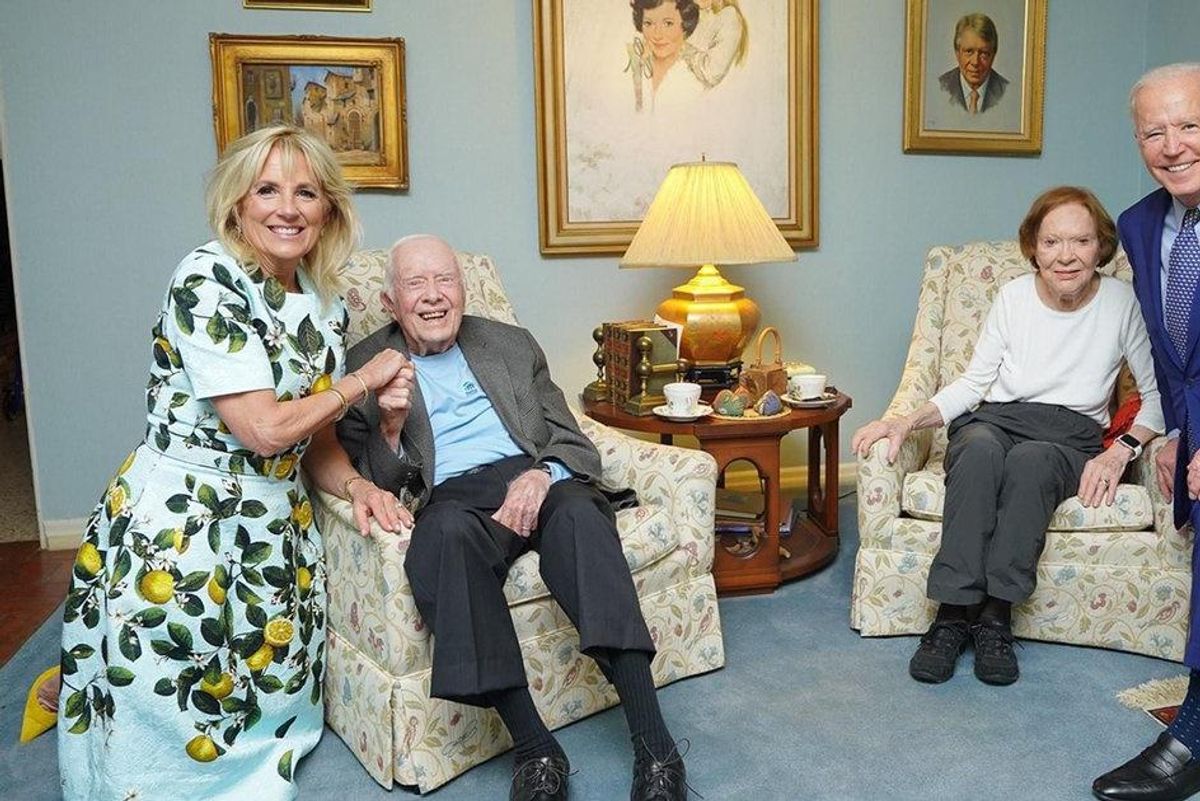 via The Carter Center

The event was historic because it brought together the oldest sitting president and the longest-lived former president in history.

But the event is causing a stir on social media because of a bizarre photo taken of the meeting.

We’re pleased to share this wonderful photo from the @POTUS and @FLOTUS visit to see the Carters in Plains, Ga.!… https://t.co/oNUxv9P7TW
— The Carter Center (@The Carter Center)1620093890.0

The strange photo made some people question whether the meeting actually happened in the first place.

Some thought it was an obvious photoshop fail.

Mostly, the photo inspired a ton of jokes.

We voted for Biden because he's a decent human being with sound policies but also because he and Jill are giants who will crush you if you make them angry.
— Sister Celluloid (@sistercelluloid) May 4, 2021

according to scale, each Biden is around 9 feet tall pic.twitter.com/tBDVjXx0bH
— beI (@badbeIla) May 4, 2021

Jonathan Alter, author of "His Very Best: Jimmy Carter, A Life," told the Washington Post that the photo looks strange due to variations in height and the way the photograph was taken.

One reason is that the camera's flash reduces shadows. The Bidens appear to be side-by-side with the Carters because the lack of shadow also reduces the appearance of depth. The Bidens are actually a lot closer to the camera than the Carters, so they appear larger.

The photo also was taken with a wide-angle lens which causes everything on the outer edges of the image to expand, and center to contract. The Carters appear to be smaller because they are in the middle of the shot.

The Carters also look smaller because people tend to shrink as they age.

Men tend to lose an inch in height between the ages of 30 and 70, while some women can lose up to two. After the age of 80, it's possible for everyone to lose another inch in height.

"Older adults can get shorter because the cartilage between their joints gets worn out and osteoporosis causes the spinal column to become shorter," Dr. Pham Liem, a geriatrician at the UAMS Donald W. Reynolds Institute on Aging, says. "Adults can also lose lean muscle mass but gain fat. This is a condition called sarcopenia."

Although Jimmy Carter was a one-term president defeated in a landslide by Ronald Reagan in 1980, he has become more popular over the years. A 2019 YouGov poll found him to be the second most popular living Commander-in-Chief — behind only Barack Obama.

A recent documentary on the former president, "Carterland," suggests that he was misunderstood while in the White House because he was way ahead of his time.

"Here's what people get wrong about Carter," Will Pattiz, one of the film's directors, told The Guardian. "He was not in over his head or ineffective, weak or indecisive – he was a visionary leader, decades ahead of his time trying to pull the country toward renewable energy, climate solutions, social justice for women and minorities, equitable treatment for all nations of the world."

"He faced nearly impossible economic problems – and at the end of the day came so very close to changing the trajectory of this nation," Pattiz adds.

Upworthy published a tongue-in-cheek endorsement of Carter for president a few years back.

From Your Site Articles
Related Articles Around the Web
politics
Culture