'SNL' takes Trump's 'SEE YOU IN COURT' tweet to 'The People's Court,' where it belongs. 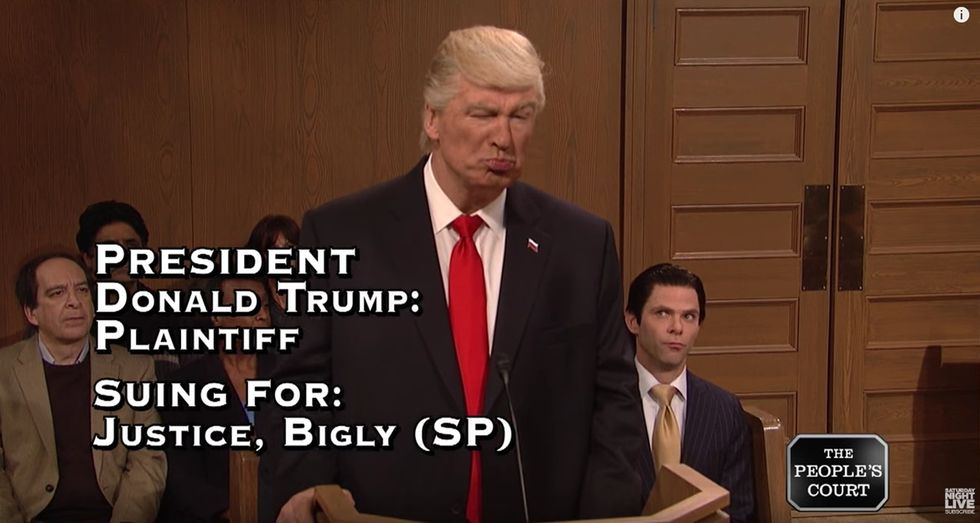 Last night's "Saturday Night Live" took the president's "SEE YOU IN COURT" tweet and put the promise just where it belongs: on "The People's Court."

Knowing that Trump usually tunes in to watch "SNL" each week, using some airtime to explain to a "TV president" how checks and balances really work is actually a smart, gutsy move.

The sketch pitted Baldwin's Trump against the three Ninth Circuit judges (played by Kyle Mooney, Vanessa Bayer, and Pete Davidson) who refused to reinstate the Muslim travel ban on Trump's familiar home turf of reality TV shows. The president was there to request "broad, unchecked power" and was mad the judges were "mean to him."

"You know, earlier a woman asked me to award her joint custody of a snake, and she had more of a case than you," Cecily Strong's Judge Marilyn Milian told him.

Watch the sketch below:

Keep Reading Show less
parents
Get stories worth sharing delivered to your inbox
By signing up you agree to Upworthy's privacy policy.
Trending Stories
arts
Culture