A powerful ad challenges Trump to act like a legitimate president. Here's the backstory.

A message from an Afghanistan war veteran takes on the president directly. 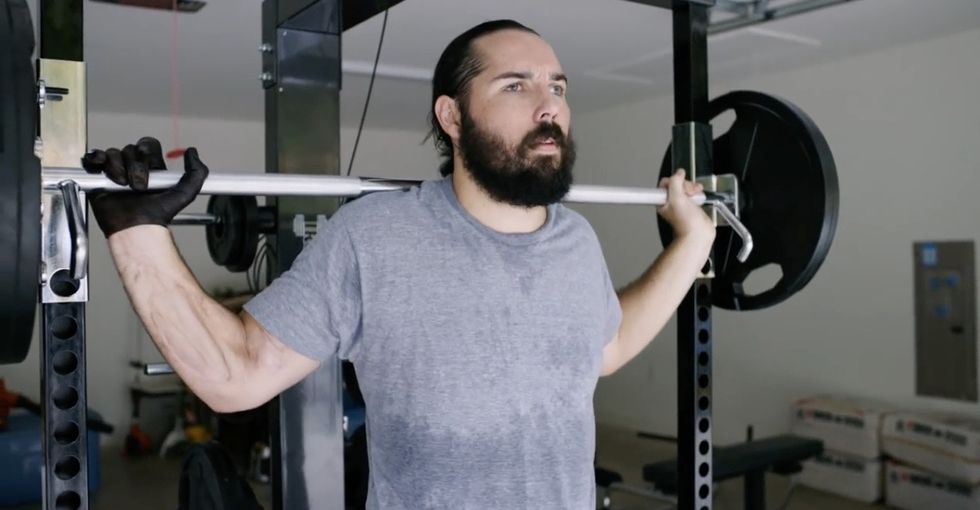 "President Trump. I hear you watch the morning shows," begins the latest TV spot from VoteVets, the self-described "largest progressive group of veterans in America."

The ad, which debuted during Monday morning's episode of MSNBC's "Morning Joe" (a show Trump reportedly watches on a regular basis), features an Afghanistan war veteran who lost a leg in combat, addressing the president directly in a voice-over.

"President Trump. I hear you watch the morning shows. Here’s what I do every morning. Look, you lost the popular vote. You’re having trouble drawing a crowd. And your approval rating keeps sinking. But kicking thousands of my fellow veterans off their health insurance by killing the Affordable Care Act and banning Muslims won’t help. And that’s not the America I sacrificed for. You want to be a legitimate president, sir? Then act like one."

Just minutes after the ad aired, Trump tweeted, which the group suspects may have been in response to the ad.

Trump has talked a pretty big game when it comes to how he sees the military's role, but VoteVets has concerns about what exactly that means.

"I will be so good at the military your head will spin," Trump said in a September 2015 interview. In one of his first acts as president, Trump signed an executive order calling for a "great rebuilding of the Armed Forces." While those actions and statements might sound good, there's not a whole lot of substance to them.

That's why VoteVets is trying to reach the president where they're most likely to be heard: on cable news.

"All we're really doing here is elevating the voice of one of our members who wants to speak directly to Trump, and obviously, we feel he's earned that right to do it," says VoteVets Chairman and Co-founder Jon Soltz. "So, we just wanted to do something that was direct, something that addressed him personally, something that would catch his attention that had substance to it about the Muslim ban and the Affordable Care Act."

Trump holds a Purple Heart replica that was given to him during a campaign event in August 2016. "I've always wanted to have a Purple Heart," Trump said. "This was much easier." Photo by Alex Wong/Getty Images.

While the ACA and the travel ban are receiving much attention lately, there are a number of other issues VoteVets and other veteran advocacy organizations are concerned about.

Soltz cites possible privatization of the Department of Veterans Affairs as one of the larger concerns on the group's radar. While Trump has made some bold promises to "fix" the VA, it's not entirely clear what that will look like. Adding to the concern, Trump held a "listening session" for possible improvements to the VA that didn't include prominent veterans advocacy organizations.

Not to mention the concerns some veterans and active members of the military may have over Trump's views on things like NATO and his general decision-making capabilities when it comes to issues of war.

But why take out an ad? Why not just flood the White House comment line and use more traditional avenues of lobbying for policy change?

Well ... with the White House comment line down, people and groups have been scrambling to find new ways to make their voices heard.

How do you get through to a president that doesn't listen to anyone outside his own circle of advisers, refuses to acknowledge any poll that shows disapproval of his performance or policies, calls any news not to his liking "fake news," and accuses anyone who protests of being nothing more than a paid plant?

VoteVets' strategy of targeting his favorite TV shows is an innovative approach, to say the least.

It's an approach that brings with it another challenge, however: TV ads take time to make. That's why VoteVets deviated from the approach they've used in the past — veterans talking directly to the camera — and instead chose to rely on a voiceover message so the audio can be swapped out as needed to keep up with the quickly changing news cycle.

"We're interested in shooting this ad in a way that's simple, that does not look like a political ad — because it's not. It's a veteran's story," says Soltz, "but in a way that if we have to make his statements more pointed, we have the ability to do that quickly so it's still relevant to the news cycle."

As for why the veteran who stars in the ad isn't named, Soltz explains that there are concerns about the veteran's and his family's safety, as well as a belief that "less is more."

"If you really want to hit hard, you've got to say something," says Soltz. "We don't need to explain a lot for people to know this is a combat-wounded Afghanistan war veteran. We don't want to distract from the visual or the words."

To learn more about this ad, visit the VoteVets website.