She helped unlock mysteries of one of earth's most remote, beautiful places.

Even as a girl, she dreamed of flying. 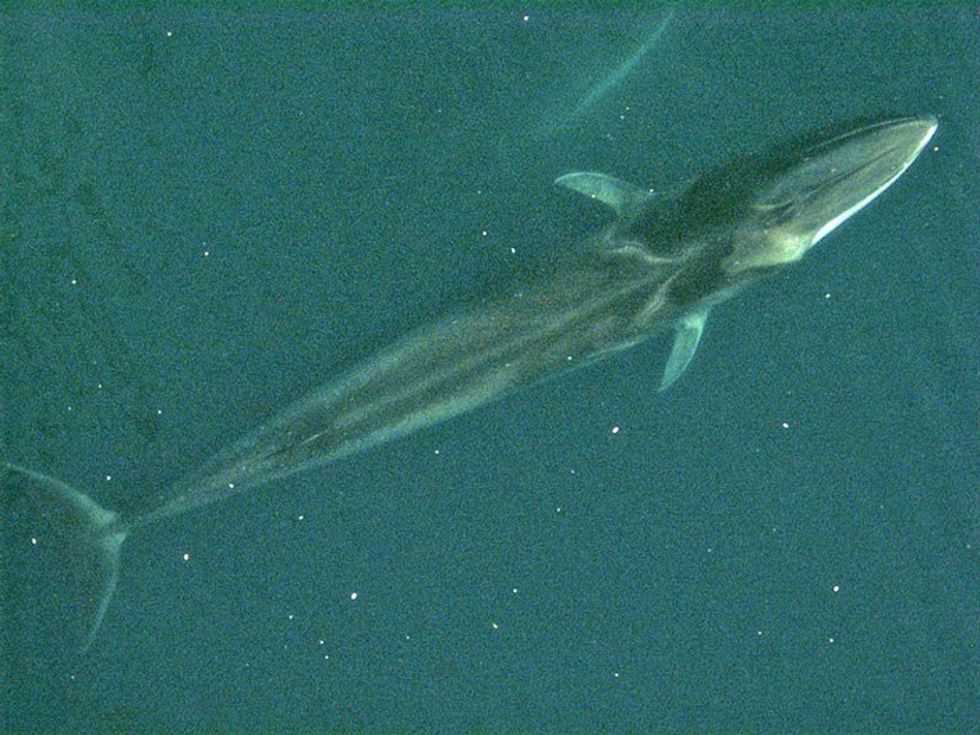 Reading this is almost enough to make you dizzy:

"The Cessna wheels over a blowing whale. My passengers, both marine mammal researchers, peer down a wing at her. She blows again. Twisting the airplane's control, the horizon wobbles in the windshield and then suddenly tilts sharply. ...


Next to me, the researcher hangs farther out the open window, her hair lifted like Medusa's snakes. 'Oh look!' she says, pointing. The blue whale gives one last blow, kicks up her fluke, and dives. ... The researcher jots something down in a notebook and then quickly reaches into the backseat for a plastic bag. Few people have the stomach for this kind of flying and I carry a supply of zip-lock plastic bags. ... Opening an Oxxo bag instead, she turns to me and politely asks,'Would you like a cookie?'"

Wildlife pilot Sandy Lanham wrote this about her work flying over one of earth's most remote, dramatic places.

Thanks to her, we know a lot more about the incredible creatures that live there.

Humpback whale mama with her baby, taken during a flight with Sandy. ©Florian Schulz/ visionsofthewild.com.

The Sea of Cortez (aka the Gulf of California) is chock-full of sea life. But for a long time, no one knew what all that marine life was doing.

Jacques Cousteau called it "The Aquarium of the World." Blue whales, fin whales, gray whales, hammerhead sharks, whale sharks, marlin, Humboldt squid, and five different species of sea turtles frequent the gulf. But no one knew much about how all those marine creatures were behaving. It's a big place and hard to get to. Most researchers who traveled there had to hug the coast in boats, just dipping their toes in. Wildlife biologists were desperate to learn more.

The Gulf of California lies between Baja and mainland Mexico. Image via Wikipedia.

In 1990, Sandy Lanham had been living in Arizona and was trying to figure out what to with her life. She'd worked with children and had been a flight instructor, a belly dancer, and a print salesperson. What next?

She loved wildlife and she loved flying. As a girl in Michigan, she would lie on her back, looking up through the trees, watching airplanes go by. She had recently acquired a very small, very old plane — a 1956 Cessna that she said was the oldest model still in the sky.

"Bad paint. Good heart," she said of that plane. She nicknamed it Emily. Image by Kaye Craig, courtesy of S. Lanham.

Then The Nature Conservancy contacted her. They desperately needed a pilot to fly a wildlife recon mission. It changed her life.

Her first flight was an eye-opener. They were looking for endangered pronghorn antelope in Mexico. The numbers of pronghorn were very low, and the only way to find them in an area that big was to survey from the air.

During that flight, she learned that researchers of all kinds of wildlife in Mexico were eager to learn more about the Baja peninsula and the Sea of Cortez. There was very little money for wildlife research in Mexico, and no one had access to airplanes to do surveys from the air. Sandy realized she could pair her love of flying with her love of wildlife and fill this gap.

In 1991, Sandy founded Environmental Flying Services to get scientists up in the air, flying after the wildlife they so much wanted to understand and help.

The beginning was hard. Researchers helped out with fuel costs, and she wrote grants to foundations to cover her expenses. "I even resorted to going into restaurants and stealing toilet paper," she remembers.

The first proposals she wrote were turned down. "I was just too weird," she told me. " A woman, wanting to fly a plane, in Mexico, to survey a bunch of different wildlife — it didn't fit in anyone's funding categories."

Finally, she landed a couple of small grants for a few thousand dollars each, which helped her convince other funders that she had a lot to offer. Ultimately, with their help, she flew over 10,000 hours with wildlife researchers and photographers (sharing the costs for about $4.5 million worth of research flights).

Sandy's flights allowed photographers to take photos like this one of fin whales grabbing a snack. ©Florian Schulz/visionsofthewild.com

She helped researchers discover new prairie dog colonies in northern Mexico and develop recovery efforts for endangered pronghorn antelope, and she helped us learn that the Sea of Cortez is a nursing ground for blue whales, the first such nursery ever discovered. She also saw rare events, such as sperm whales ramming heads.

Getting a head count on pronghorn antelope. Gail Collins/U.S. FWS.

As one researcher put it, "without her, we don't fly."

Sandy was awarded a MacArthur "Genius Grant" in 2001 for her dedication to getting hard (what she calls "crunchy as krill") data on all kinds of wild animals. This data is critical for protecting the incredible animal life in the gulf.

In her 24 years of flying with Environmental Flying Services, Sandy Lanham helped us discover critical information about earth's creatures and what we might do to protect them. She's an aeronautical ace and a diplomat, connecting passionate people on both sides of the border and creating a culture of respect and environmental teamwork across the U.S.-Mexico boundary.

Thanks to her work, gorgeous pictures like this one exist for us all to enjoy:

Hats off to you, Sandy!