She had an abortion at 19. Here's what she wants the author of a pro-life op-ed to know. 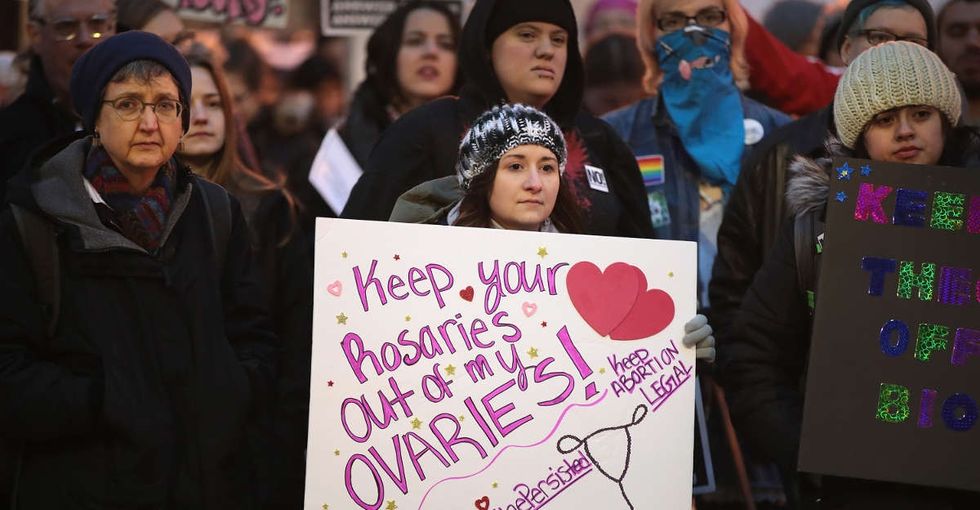 Renee Bracey Sherman was 19 when she had an abortion, and she doesn't regret it.

That, she says, is why she was livid after encountering activist Lori Szala's stark, anti-abortion op-ed in The New York Times, which is generating furious responses from readers.

In the piece, Szala argues that labeling abortion an economic issue is "dehumanizing," both to prospective parents for whom child-rearing should be about more than money and to their prospective children.

"Parenting presents undeniable challenges, but no one argues that those challenges give parents the right to kill their children.

It’s also patronizing, and patently dishonest. Of course unplanned pregnancy presents challenges. But it doesn’t have to lead to economic failure. Abortion is society’s easy way out — its way of avoiding grappling with the fundamental injustices driving women to abortion clinics."

It's a belief, Szala explains, that is largely derived from her personal experience as a young mother-to-be who nearly ended her pregnancy — though she ultimately chose not to.

Pressured to abort when she became pregnant in high school, Szala says that she was dissuaded by a friend who told her she'd had an abortion and later came to regret her decision.

Bracey Sherman wants people to know that her choice to end her pregnancy without guilt is common to far more women — and there's data to back her up.

A longitudinal study published in 2015 found that 95% of women who had abortions felt that it had been the right decision. And other research has found that women seeking abortions are more certain in their decision than people considering other surgeries.

If she had the chance, Bracey Sherman says, she would ask Szala if she appreciated the freedom to make her decision on her own terms.

At the time of her pregnancy, Bracey Sherman says she was working a low-wage retail job and in an abusive relationship. The notion that people who are pregnant — particularly people of color — can simply pull themselves "up by [their] bootstraps" and make it work as a parent is a dangerous myth, she argues.

"[Szala] ignores the fact that so many people don’t even have boots."

Other critics of Szala's piece argue that, in a rush to chastise women who end their pregnancies, she fails to offer solutions for preventing unwanted pregnancies in the first place.

Some pointed out that Szala, who works for an organization that owns and operates crisis pregnancy centers, could stand to benefit financially from people taking her advice.

Still others argued that terminating a pregnancy — for any reason — should always be a matter of choice and insisting it shouldn't be often comes from a desire to punish or control women.

It *should* be easy to have sex without unwanted childbearing. Women deserve to feel love and pleasure without punishment.
— Amanda Marcotte (@Amanda Marcotte)1494344085.0

Bracey Sherman wants more women to tell their friends and family about their experiences with abortion, especially in the face of a surge in high-profile, anti-choice opinion pieces like Szala's making it into print.

A 2014 study conducted by Sarah Cowen at New York University found that people who are opposed to reproductive rights are roughly 21% less likely to say they know someone who has had an abortion than those who are pro-choice. Bracey Sherman believes that's not by chance — and that people who terminate their pregnancies may be less likely to tell their anti-choice friends and relatives.

After getting involved with reproductive rights activism, Bracey Sherman started a project called "We Testify," which highlights the stories of people who have terminated pregnancies in an attempt to broker an understanding with those across the aisle.

If people aren't hearing, she believes, it's not for lack of speaking out.

"We’re here. We’re making our voices heard," Bracey Sherman says. "The question is: At what point are people going to actually listen to us?"