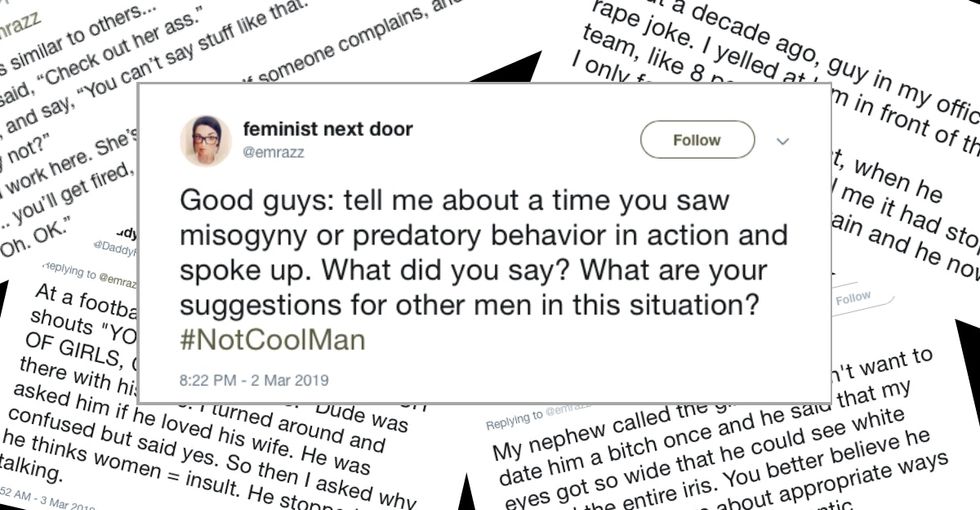 Men are sharing examples of how they step up and step in when they see problematic behaviors in their peers, and people are here for it.

Twitter user "feminist next door" posed an inquiry to her followers, asking "good guys" to share times they saw misogyny or predatory behavior and did something about it. "What did you say," she asked. "What are your suggestions for the other other men in this situation?" She added a perfectly fitting hashtag: #NotCoolMan.

Not only did the good guys show up for the thread, but their stories show how men can interrupt situations when they see women being mistreated and help put a stop to it.

The answers are fantastic and specific. In fact, the whole thread read like a Men's Guide to Stopping Misogyny.

Someone named 'Jeffrey' or 'Michael' is more likely to be a CEO than a woman.

See exhibits A through E:

Some guys shared how silence can be a powerful teacher, while others gave a how-to in direct confrontation.

You don't always have to call someone out with words in order to disrupt a toxic norm. For example, letting awkward silence sit there after a sexist joke can be amazingly effective.

@emrazz It can be as small and simple as just not laughing at a misogynistic joke you hear and creating that awkward silence
— Garett Guenot (@Garett Guenot) 1551590117.0

@emrazz I've found simply not laughing at stupid sexist jokes can be powerful. There is always a moment after a "jo… https://t.co/iLmWgcp3gi
— Benjamin T. Jones (@Benjamin T. Jones) 1551595384.0

And sometimes just pretending to be someone else can save a woman from an uncomfortable or potentially dangerous situation.

Then again, directly calling people on their behavior is sometimes the most effective tack to take. These stories show how directly confronting the behavior can jar people into recognizing that it's problematic:

It can be helpful to see what specific words men use in these situations. Case in point:

Some shared how they're helping bring up the next generation to do better.

Parents and teachers play a huge role in young people's lives and can help mold their views and behaviors. Kudos to these folks for helping ensure a safer, less creepy culture for women in the future.

Presumably we all know awesome men who don't allow misogynistic or predatory behavior go unchecked in their presence, but it's so refreshing to see these stories all gathered in one place. Yay, good guys. Thanks for sharing and for giving us all a dose of hope.

This article was originally published on March 3, 2019.