Republicans and Democrats are starting to agree on the Confederate flag. It's about time. 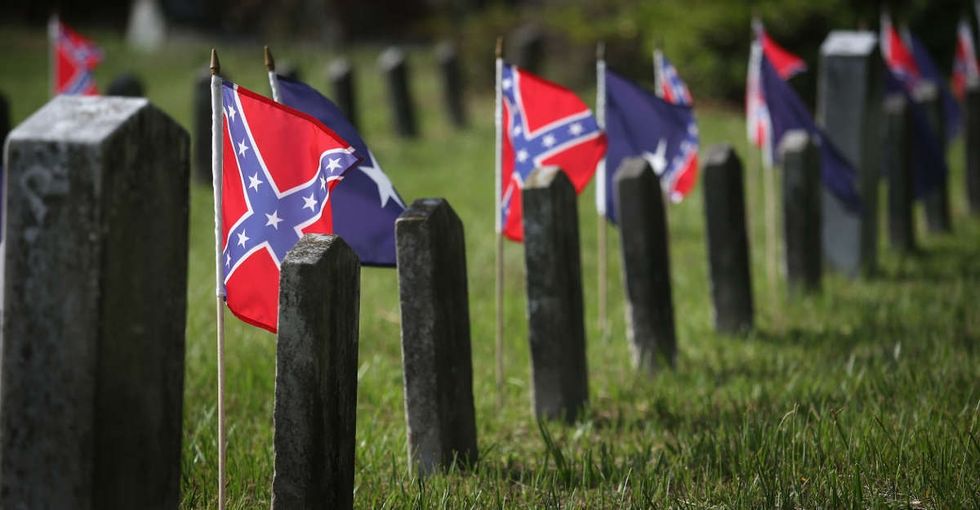 Hey, look! Congress did something kind of bipartisan for a change.

Perhaps even more surprisingly, Congress did something positive.

Under a newly passed amendment to a larger bill, the Confederate flag will no longer be welcome at many veterans' cemeteries.

A Confederate veterans' cemetery. If the law takes effect, the ban would only apply to cemeteries administered by the V.A. Photo by John Moore/Getty Images.

The outcome of the vote was reported by The Associated Press:

"The House voted Thursday to ban the display of the Confederate flag on flagpoles at Veterans Administration cemeteries.

The 265-159 vote would block descendants and others seeking to commemorate veterans of the Confederate States of America from flying the Confederate Battle Flag over mass graves, even on days that flag displays are permitted."

This kind of vote might not have been possible just a few years ago.

For decades, the Confederate flag, a symbol of slavery and Jim Crow, flew on public property all over the South.

As late as 2000, the flag was still flying over the South Carolina state capitol. A highly contentious debate that year ended with the flag's removal from the building itself, but lawmakers — in an attempt to accommodate (mostly) white Southerners who claimed the flag was simply a marker of their regional identity and heritage — allowed it to remain on public grounds near the statehouse.

Last year's tragic shooting in Charleston, South Carolina, in which nine black men and women were murdered in their own church, finally got lawmakers on both sides of the aisle rethinking the place the flag has in public life.

After an investigation into shooter Dylann Roof revealed dozens of images detailing his worship of the Confederate flag, its place as a racist symbol became impossible to ignore.

Lawmakers in South Carolina voted to finally and completely remove the flag from the area in front of the statehouse (even before lawmakers acted, courageous activist Bree Newsome took it down on her own).

It's regrettable that it took a tragedy of such terrible magnitude to force this much-needed change.

The Confederate flag is lowered at the South Carolina statehouse. Photo by John Moore/Getty Images.

Thankfully, that change is finally coming to Washington — and, with this vote, becoming the rare issue where Democrats and at least some Republicans, are coming closer to agreement rather than drifting farther apart.

For now, at least, the Confederate flag debate is finally moving in the right direction.

A South Carolina police officer puts away the Confederate flag that had been flying at the statehouse. Photo by John Moore/Getty Images.

Down, instead of up.