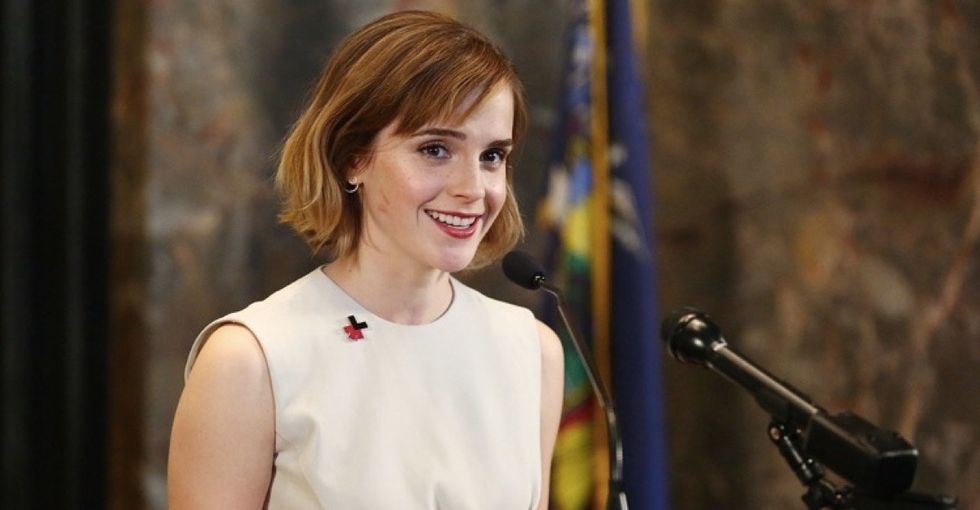 Emma Watson has long prided herself on being a feminist.

And it's not just lip service. The 27-year-old actress served as a United Nations Women Goodwill Ambassador and spoke to the assembly in 2014 about the importance of gender equality. She continues to speak out about women's rights at almost every opportunity, even while promoting her films or walking the red carpet.

But there's one big problem: Watson's brand of feminism has been really, really white.

White womanhood come with certain privileges and often positive assumptions. Since whiteness is often the default and traditionally ignored when it comes to race and ethnicity, white women are often turned off by the idea of being called 'white feminists.'

In an open letter to her feminist book club, Our Shared Self, Watson admits this was her first reaction:

When I heard myself being called a “white feminist” I didn’t understand (I suppose I proved their case in point). What was the need to define me — or anyone else for that matter — as a feminist by race? What did this mean? Was I being called racist? Was the feminist movement more fractured than I had understood? I began ... panicking.

Emma Watson speaks during a press conference to launch of the campaign 'HeForShe' at the United Nations Headquarters. Photo by Kena Betancur/AFP/Getty Images.

Why is Watson referred to as a white feminist?

Because like so many others, whenever she'd publicly advocated for women, Watson had largely ignored the unique challenges of women of color, who must navigate the twin burdens of racism and sexism. She'd also failed to recognize and acknowledge her own privilege and the role it played not only in her personal success, but in the upholding of white supremacist and patriarchal institutions the United Kingdom and the United States are based on.

It would have been more useful to spend the time asking myself questions like: What are the ways I have benefited from being white? In what ways do I support and uphold a system that is structurally racist? How do my race, class and gender affect my perspective?

Because if feminism doesn't take racism, ableism, anti-LGBTQ aggression, poverty, and body negativity into account, then who exactly will it help? Who will get a seat at the table?

Demonstrators take part in 'A Day Without a Woman' rally. Photo by Mandel Ngan/AFP/Getty Images.

But this year, after fully acknowledging her own shortcomings and missteps, Watson made a point to do better — and she's inviting all of us to join her.

Emma Watson is not the only person, celebrity or otherwise, largely ignoring the unique needs of women of color, poor women, queer and trans women, working women, and disabled women. Calling herself out as part of the problem is significant. Making a point to improve and bringing others along is vital.

That's why the next book in Watson's book club is "Why I’m No Longer Talking to White People About Race" by Reni Eddo-Lodge. The books discusses the role of racism in historic and contemporary Britain and offers ways everyone can confront and challenge it.

I have since learned that being a feminist is more than a single choice or decision. It’s an interrogation of self. Every time I think I’ve peeled all the layers, there’s another layer to peel. But, I also understand that the most difficult journeys are often the most worthwhile. And that this process cannot be done at anyone else’s pace or speed.

Watson is encouraging fellow feminists to start listening to other voices in the movement, particularly those who are marginalized. This is a big step in the right direction.

A women chants as people march in south London to protest against police brutality in the U.S.. Photo by Daniel Leal-Olivas/AFP/Getty Images.

Watson also thanked other women working in the movement for calling her out on her initially narrow view of feminism and allowing her to put in the effort to make it right. She's already started connecting with other women of color to better understand their challenges and how she can use her privilege and status to signal-boost their work.

As human beings, as friends, as family members, as partners, we all have blind spots; we need people that love us to call us out and then walk with us while we do the work.

Because there's more to being a feminist than carrying a witty sign or wearing a pin on your jacket.

It's doing the challenging ambitious work in your community and within yourself. It's recognizing your own privileges and using them to uplift and support women who don't get a fair shake.

It's knowing that all of us have work to do when it comes to creating the world we deserve — but always believing it's possible.

Keep Reading Show less
heroes
Get stories worth sharing delivered to your inbox
By signing up you agree to Upworthy's privacy policy.
Trending Stories
culture
popular