Pediatricians have just declared that spanking under any circumstances is bad for children. 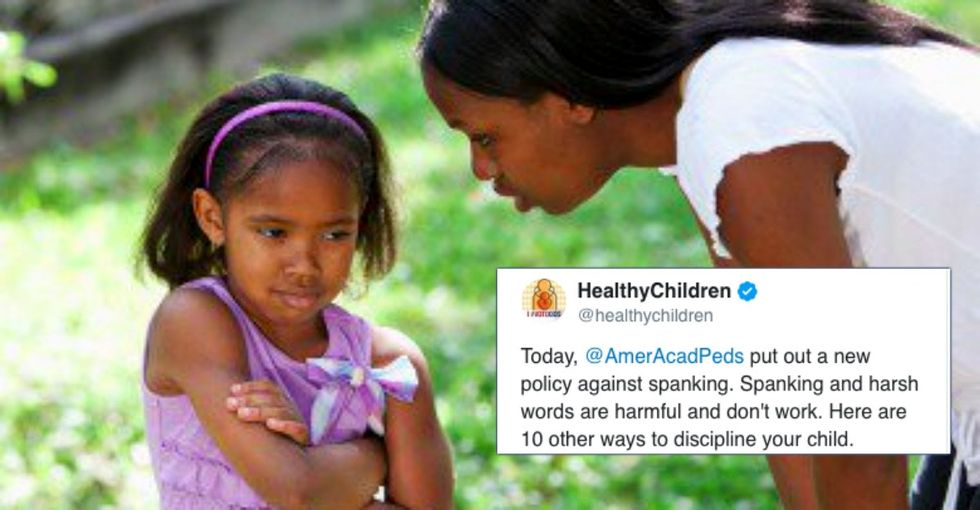 20 years ago, the American Academy of Pediatrics started veering parents away from spanking. Now they’re outright saying "Don't do it."

In 1998, the AAP issued guidelines to doctors stating that "parents be encouraged and assisted in developing methods other than spanking in response to undesired behavior." Now, the nation's largest organization of doctors who specialize in treating children is taking a harder stance.

"Aversive disciplinary strategies, including all forms of corporal punishment and yelling at or shaming children, are minimally effective in the short-term and not effective in the long-term," the new policy statement reads. "With new evidence, researchers link corporal punishment to an increased risk of negative behavioral, cognitive, psychosocial, and emotional outcomes for children.

Updated @AmerAcadPeds policy: Use effective discipline strategies for children that do not involve spanking, other… https://t.co/7KHkC55ZZs
— AAP News (@AAP News)1541426706.0

Corporal punishment is defined as "noninjurious, open-handed hitting with the intention of modifying child behavior," which includes spanking. The policy statement includes findings from a vast body of research showing that spanking is proven to be ineffective at changing children's behavior and is associated with negative mental health in the long term.

Spanking has been a subject of debate among parents for decades, with passionate arguments on both sides.

I've written parenting content for years and have witnessed countless discussions about spanking. Some feel it's absolutely unacceptable strike a child in any way, for any reason. Others see a "pop on the butt" as a necessary way to drive home a lesson and teach kids to behave. Frequently, those in the non-spanking camp cite the research showing that spanking is an ineffective and potentially harmful form of discipline. Those who defend spanking often point to the decrease in spanking as a reason "kids these days" are disrespectful and misbehaved, and insist that being spanked themselves did not adversely affect them in any way.

Having grown up in a non-spanking household and raising my kids in one, I've never understood the arguments that spanking is necessary. Most kids now aren't spanked, and most of them are lovely children and teens who are respectful, kind, contributing members of our community.

So what do non-spanking parents do instead?

Babies and toddlers can sometimes exhibit behaviors that may be frustrating to parents, but often those behaviors are simply phases of learning.

For instance, for babies and young toddlers who are getting into things, Dr. Robert Sege, a pediatrician at the Floating Hospital for Children at Tufts Medical Center in Boston and first author of the AAP policy statement told CNN, "the best thing to do is just pick them up and move them somewhere else, distract them, change the subject—and that's usually all they need and they can handle it."

Some spankers say they only use spanking for serious safety issues, like a toddler running into the street. Some, like Sege, suggest logical consequences like having the child hold your hand anytime you're near a road. But if the goal is to inspire fear of something truly dangerous, there are ways to do that without spanking.

When my toddlers started running into a road or reaching for a hot stovetop, I would immediately sweep them into my arms and express my own exaggerated fear for their safety. "Are you okay?! That was so scary! That car could have squashed you!" I'd get right down on their level, let them see my worried face, check them over to "make sure they were okay," and then hug them tight again. "Oh, thank goodness you're okay! That was so scary!" A little dramatic perhaps, but effective.

Positive parenting is a long game, but loving, consistent teaching pays off.

As kids get older and can understand more, parenting means lots of communication and consistency. Of course, kids need to know that there are consequences for their actions and choices—that's an important life lesson for parents to teach—but nowhere in real life is being hit on the butt a natural consequence for a poor choice.

Most of parenting boils down to helping kids learn how to be good humans, and spanking does nothing to teach them how to do that. And since research shows spanking is ineffective at best and harmful at worst, there's simply no need for it. Other methods of discipline are shown to have better outcomes, so parents would be wise to stop thinking of it as a necessary or useful tool and explore other means of teaching kids good behavior and habits.

It must be terribly unnerving to wake up one day and realize the government thinks you're dead, even though you're alive and kicking. You'd figure that if you were declared dead and weren't, you'd have some say in the matter.

However, for a woman in France, things haven't been that easy.

Jeanne Pouchain, 58, who lives in the village of St. Joseph, near Lyon, had a rude awakening three years ago when she received a letter from the Lyon court of appeals declaring that her family members need to pay the money she allegedly owed.

Because, according to state records, she was deceased.