Parkland students offer 7 great ideas about gun control — plus a ridiculous one. 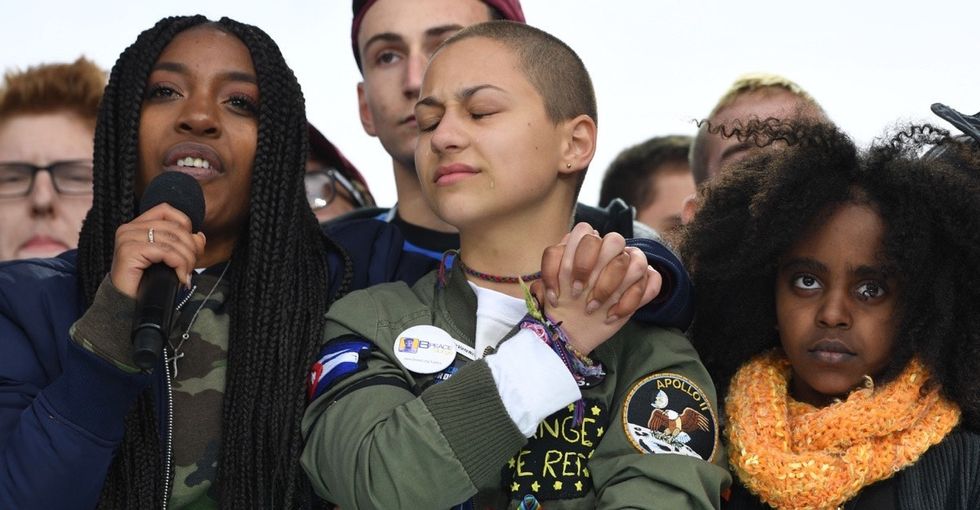 In the lead-up to the March for Our Lives, The Guardian turned its pages over to the editors of Marjory Stoneman Douglas High School's student paper.

Eagle Eye staff wrote or edited more than a dozen stories on the British media outlet's U.S. website, complete with a number of great on-the-ground reports from the march itself. It was a really great idea, giving a large platform to some budding young journalists, and it was largely well-received.

One story did inspire a bit of controversy: "Our manifesto to fix America's gun laws" included a few clumsy goals mixed in with the good.

First, there's the good: Eagle Eye editors propose banning semi-automatic weapons that can fire high-velocity rounds, writing, "Civilians shouldn’t have access to the same weapons that soldiers do. That’s a gross misuse of the second amendment." Presumably, the students are referring to a renewed ban on so-called assault weapons, something that a recent Quinnipiac poll found was supported by around 67% of Americans.

They also call for a ban on bump stocks; the creation of a database for gun sales and elimination of background-check loopholes; a repeal of the Dickey Amendment, which prevents the Centers for Disease Control and Prevention from conducting any research that results in a recommendation for more gun restrictions; and for the government to raise the purchase age requirement to 21.

Then there's the not-so-good: "Dedicate more funds to mental health research and professionals," reads one of the recommendations, noting, "Many of those who commit mass shootings suffer from [PTSD, depression, and other debilitating mental illnesses]."

The trouble with that recommendation isn't in the actual policy itself — it's true that increased funding for mental health research and professionals would be helpful, generally — but in its justification.

As it turns out, individuals with mental illness are actually less likely than those without mental illness to carry out a gun-related homicide. Where mental illness does play a big role in gun deaths is suicide. So by all means, we should dedicate those funds to mental health programs, just not for the reasons these students are suggesting.

Millions of people around the country attended March for Our Lives rallies on March 24, 2018. Photo by Shannon Finney/Getty Images.

Another less-than-ideal agenda item is a call to increase funding for school security. Marjory Stoneman Douglas had one armed school resource officer on campus the day of the shooting. Can one officer protect 3,000 students? Probably not. Is the answer to fill halls with armed guards and officers? Also probably not.

Yes, a school resource officer did engage with the gunman in the recent school shooting in Maryland (which ultimately ended in the student's death by a self-inflicted gunshot). That officer's action is commendable, but there are unintended consequences of merging our schools with the police state: Time and again, school resource officers have been caught getting physically violent with students — especially students of color.

One idea in particular is worth another look: Allowing mental health providers to more freely speak with law enforcement about patients.

This may sound like a good idea, but it's actually a call to relax privacy laws and likely will just make the entire situation a whole lot worse. It is worth considering the students' context here, however:

"As seen in the tragedy at our school, poor communication between mental healthcare providers and law enforcement may have contributed to a disturbed person with murderous tendencies and intentions entering a school and gunning down 17 people in cold blood.

We must improve this channel of communication. To do so, privacy laws should be amended. That will allow us to prevent people who are a danger to themselves or to others from purchasing firearms. That could help prevent tragedies such as the Parkland massacre."

To be sure, most people who've been following the story coming out of Parkland will be able to agree that the shooter, Nikolas Cruz, fell through the law enforcement cracks. There were warning signs, but the real issue wasn't that law enforcement didn't know; it was that after school guidance counselor tried to have him involuntarily committed in 2016, a state agency determined that his "final level of risk is low."

Basically, everyone involved was human — but still in touch with each other. That's because the Health Insurance Portability and Accountability Act (HIPAA) already allows health providers to communicate with law enforcement if they believe there is a "serious and imminent threat of harm to self or others."

In fact, under HIPAA, providers have a duty to notify law enforcement in those situations. Further loosening those rules will only discourage people from seek help they need.

Also, law enforcement has an extremely sketchy history when it comes to responding to calls involving mental illness. A 2015 report found that nearly 1 in 4 fatal police encounters involved someone with mental illness, making mentally ill people an estimated 16 times more likely to be shot by police compared with the rest of the population — in part because not enough police officers are trained to deal with the mentally ill.

The general scope of the Parkland students' goals appear well-intentioned and actually within reach. Still, it's worth considering a few unintended consequences.

This is the starting point of a discussion, and the world is better because these students are speaking up for what they believe in. They may not get it totally right 100% of the time, and that's OK.

People attend the March for Our Lives in Washington, D.C. Photo by Mark Wilson/Getty Images.

Update 4/3/2018: This post was edited to clarify the detail that the Maryland school resource officer was later determined not to have taken down the armed student but that he had confronted him before the student took his own life.