My Father-In-Law Says We Should Not Bail Out Detroit. I Think I'll Send Him This.

We all need to really be paying attention to what's happening in Detroit, because if they can pull this kind of thing there, every city in the nation is in jeopardy. 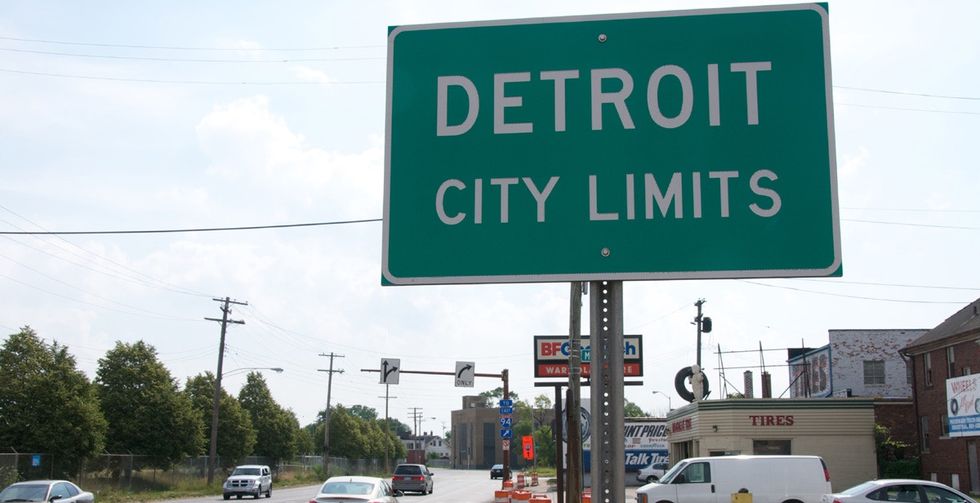 The Story Of Detroit's Bankruptcy And Why It Matters

So it all began in July when Michigan Gov. Rick Snyder and his politically appointed emergency financial manager decided to push the City of Detroit into municipal bankruptcy.

It's the largest municipal bankruptcy filing in the history of the United States, which makes this a BFD.

Between 2011-2012, Snyder took away about $66 million that Detroit should have received as its share of state revenues. And over the past decade, the state has taken away $700 million in funding from Detroit.

Then Gov. Snyder signed a local dictator law that allows for "emergency financial managers." They can tear up cities' contracts with workers and sell off city assets. Citizens have no say in this.

Let’s keep in mind that these public employees have already worked in good faith and agreed to make huge sacrifices to keep Detroit running. This includes $160 million in annual savings from a 10-percent pay cut, health benefit reductions and a 40-percent cut in future pension benefits. The sacrifices were all one-sided.

Now, Michiganders didn't like the local dictator law that Snyder and his cronies passed. So they repealed it in a statewide referendum.

But then Snyder and his cronies pushed the local dictator law through a lame-duck session. And they used a loophole that prevents citizens from repealing the legislation for a second time.

This whole situation is kind of déjà vu. Like that time Snyder campaigned for governor assuring voters that “right-to-work” was too divisive for Michigan. But then he rammed it through during a lame-duck legislative session.

The decline of Detroit industry during the past 40 years was not the fault of modestly paid public-service workers. When Wall St. bankers and corporations helped saddle Detroit with crippling debt, public workers stayed and kept the city running.

But instead of addressing the actual causes of the city’s financial problems Snyder made it harder for the city to pay its bills. Then he declared that Detroit was in a state of financial emergency and appointed a “emergency financial manager” for the city.

He claims that he didn't want to push the city into bankruptcy. But oddly enough his appointed emergency financial manager is a bankruptcy lawyer.

Now this means retired public service workers' retirement funds could get wiped out. They could get paid cents on the dollar, forcing them to choose between paying for their electricity, their house, food, or medicine.

It also means that taxpayers now have to pay about $1.4 million a month to lawyers and consultants in order to go through the bankruptcy. That is money which could be used to fund starved city services such as public safety, transportation, or firefighters.

Even the Republican attorney general says this is unconstitutional. The state constitution says clearly that cutting pension payments is illegal. Gov. Synder should be beating up on Wall Street instead of retirees and workers.

But instead of defending his actions, Snyder tried to get the bankruptcy judge to prevent him from being deposed in bankruptcy court about HIS decision to push Detroit into bankruptcy.

To put all this into perspective, these retirees don't have bling pensions. The average is only $19,000 a year. These pensions account for only 4 percent of Detroit’s budget expenditures.

And many of them don't receive Social Security. These public service employees worked their entire lives and made sacrifices. The pension is all they have. That means there isn’t a safety net if it gets wiped out.

Gov. Snyder, meanwhile, doled out more than a billion dollars in tax cuts to multinational corporations, many of which shipped American jobs overseas. Snyder found the money for these sweetheart deals by reducing aid to school districts, towns and cities across the state.

(Except it ain't his money)

He also announced, just days after authorizing Detroit’s bankruptcy, that some $250 million in taxpayer money would be spent to help a billionaire build a new for-profit hockey arena in the city.

Eminem couldn't believe it either.

So maybe this is a crazy thought: shouldn't we be securing retirees' pensions before paying off Wall Street banks? You know, the people who served their city for decades, took pay cuts, and have no other source of retirement income?

Because at the end of the day Wall St. investors and their bond insurers are going to come out of this okay. It’s workers and retirees who will suffer the most.

If you agree that retirees and working people should come before Wall St. profits then join us and show that you