MTV decided to make a bunch of white kids talk about whiteness. And it may have helped them.

I really struggled to appreciate MTV's "White People." But then I realized I don't actually have to. 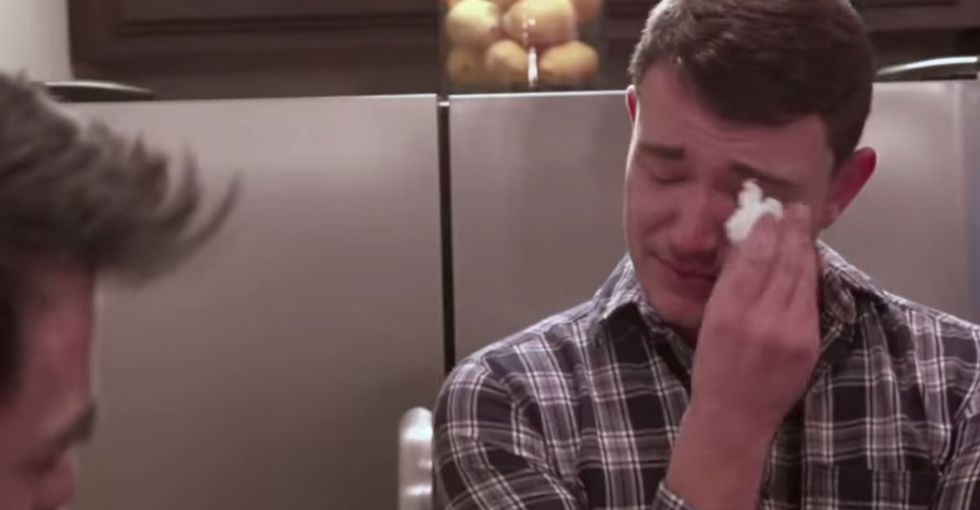 "I don't think I'm going to watch that. It'll probably piss me off. And I don't want to be pissed off."

That is what I said when I first saw the trailer for MTV's hour-long documentary "White People," in which journalist and director Jose Antonio Vargas travels to different cities across the U.S. talking to young white people about race. I was only half-joking.

Most scoffed at the idea of having a feature film all about white people, a group that is arguably given enough air time and attention as it is. And an hour to watch people say inaccurate, racist things sounds like a lot of fun! (Or not.)

On top of that, many white people were concerned after seeing the trailer that they were being unfairly stereotyped — portrayed as clueless and oblivious at best, bigoted and racist at worst.

I too had my doubts. But when I was invited to an advance screening and discussion, I decided to quiet my cynicism and go. Maybe it wouldn't be that bad?

Then I saw it. And I felt oh so many feelings.

There were hilarious moments (usually when Jose would blank-stare and raise his eyebrows at a student's tone-deaf remark), heartbreaking moments (like when a white student who teaches a white privilege course is afraid to tell his conservative father about his views), and more than enough "What did you just say??" moments to last a lifetime.

There were even a few stand-up-and-cheer moments (like when a white teacher recalls what a Native American student said after being told he wouldn't be excused from class: "You took our land and now you won't even let me go to the bathroom?").

But there were too many times that I just didn't feel good about what I was seeing.

Like when a young black woman burst into tears at a dinner table as white women who she just met were casually using and defining the term "ghetto." The black woman explained why that hurt her and received an apology, but....

Or when Jose listened as a young Italian American man sat around the dinner table with his family discussing just how rude the Asian immigrants "taking over" his neighborhood are.

Or, most memorably, when a young white woman firmly believed that she couldn't get a scholarship for college because they were all going to "minorities." She was definitely being discriminated against because of the color of her skin. And she did not like it.

In each of these examples, Jose ultimately responded with a counter-point, some cultural context, or a set of actual facts to make sure the truth was presented. (He is, after all, an ethical journalist.) But still, it was all so ... nice. Too nice.

The gentleness and ease of it all disturbed me.

The reality of race and identity in America is not gentle and easy. Most young people of color experience it harshly and with no concern for how it makes them feel. So why would we have a conversation about the topic any differently with young white people on TV? Why should these topics only yield enough mild discomfort and curiosity to fill 45 minutes? If the film wasn't going to rock their worlds just as dramatically and painfully as other young people have their worlds rocked every single day, what was the point?

I tried to remember what Jose had said to me when I asked him about the purpose of the film earlier.

“I could have easily made a didactic film that says 'Here's the history of white supremacy.' But that's been done. And frankly, this is more interesting," he said.

Instead, he wanted to:

Very noble and logical goals. And yet I couldn't shake my nagging feeling of frustration while watching it.

I was thinking about this as the film ended and Jose took the stage for audience Q&A. While I was planning my perfectly worded, hard-hitting question about The Important Things, I heard a quiet, shy voice on the microphone.

I turned my eyes to the Q&A mic and saw a timid young brown teen nervously ask: “How can I start this conversation at my school? I really want to."

I melted. It felt like I had watched a million cat and baby videos all at the same time.

Right after him, a 19-year-old white college freshman who said her school is extremely racially segregated, earnestly asked, "How can I join conversations about race at school and on Facebook and say what I think without silencing other important voices?"

Great question. As Jose began to answer, it hit me.

This is who the film is for: the kids. And not just any kids. It's for a very specific subset of Generation Z (the baby millennials).

Now, you might say: "Well obviously. It's an MTV film." But take a moment and think about who those kids really are.

All across the country, there are thousands — if not millions — of teens like the two in the audience and those in the film: a generation of white teens who have been fed a steady diet of MTV + colorblind idealism. Some have bought it hook, line, and sinker. Others have not but don't feel equipped to challenge it. This documentary is for them.

It is for high school students who live in entirely white neighborhoods and have never been exposed to ethnic studies or heard the word "privilege."

It's for the kids who know that something in America is wrong — How could you not? — but have yet to connect their own personal identity and experience to that reality.

And you know who else's it's for? (This was "aha" moment #2 for me.) It's also for the generation of isolated teens of color who go to school in homogenous cities and towns and know that life is so much more complicated than their friends realize but don't know how to talk about it with them. This doc is for them too.

I conceded that while the film may not be perfect (especially for adults who are already socially aware), it works perfectly for teens who were uncomfortable enough in those 45 minutes to begin thinking in ways that could lead to real change.

Identity, privilege, and racism are heavy topics that I believe are always deserving of thoughtfulness, and, most of all, realness. But young people today are having an experience unlike any other in American history, and they can't be talked to in cookie-cutter ways. Generation Z is being fed competing messages about who they are and how the world works. They are exposed to more and more, yet educated less and less and given fewer tools to process what they see and hear. And somehow, in an interconnected, "diverse" world where racism runs rampant and remains on the front pages of newspapers every day, teens can somehow still end up incredibly sheltered and uninformed. And that is the context in which "White People" finds itself and that informs Jose's sensitive approach.

If, with all that in mind, it takes MTV, an empathetic journalist, and the right amount of gentle awkwardness to give them a peek into the reality of whiteness, it just might be an all right place to start.