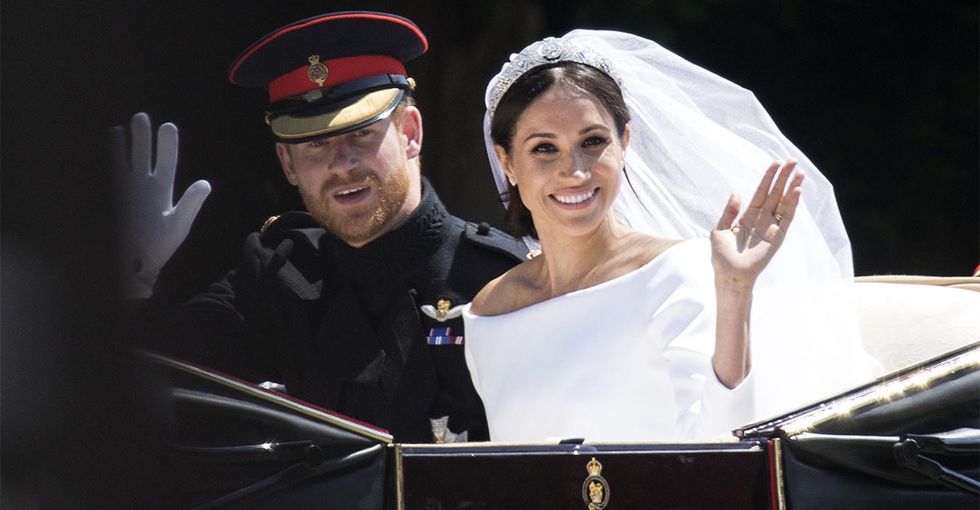 Prince Harry and Meghan Markle's glorious wedding was one for the history books.

In a display of fairy tale magic, the duke and duchess of Sussex said their vows in front of millions of viewers around the world. It. Was. Beautiful.

Roughly 18 million people in the U.K. tuned into the event, and it's safe to say Americans were pretty enamored with the stunning affair as well.

The road up to the wedding was no easy feat. Fighting unethical press, sexism, and racism, Harry and Markle held strong together. Thankfully, they made it to their happy ending.

Aside from the dashing uniforms, stunning gowns, and oh-so-adorable kiddos, the wedding was an incredible display of revolutionary love. Here are five ways the new couple made their love as radical as can be:

1. They are one of the first publicly recognized interracial couples in the British monarchy.

Harry and Markle are not the first interracial couple in British monarchy history. Due to the monarchy's fickleness with showing blackness in paintings (such as black features, hair textures, etc.), it's unclear who actually holds that title. But, it's likely to go back to Queen Charlotte of Mecklenburg-Strelitz of the 18th century, a mixed-race woman who married King George III. With about seven generations between Charlotte and Markle, the visibility is long overdue.

2. Markle was "accompanied" down the aisle not "given away."

A self-proclaimed feminist, Markle made it clear from her earliest days with Harry that she would not be one to follow tradition if it didn't align with her values. This became evident through details like the style of the wedding to the choice of the cake maker and in other traditions, like Markle's walk down the aisle.

In most Western weddings, a bride's father walks her down the aisle to "give her away" to her husband, steeped in a tradition of treating women like property that can be transferred. Markle, whose father was unable to attend the wedding, chose to walk the first part of the aisle alone and then was joined by Prince Charles for the remainder. Most important was the language used around this aspect of the ceremony: Markle was "accompanied" down the aisle.

Given the U.K.'s staunch traditionalism, Markle's prominent decision was an important display of autonomy and a woman's ability to make her own choices even in a committed marriage. It also serves as a beautiful reminder that traditions can be honored and altered to reflect a progressive marriage that allows both individuals to own their choices.

3. The sermon was a legendary display of black ministry and love.

Bishop Michael Curry, the first black presiding bishop and primate of the Episcopal Church, brought down the house with a powerful sermon called "The Power of Love," citing love's redemptive and powerful capabilities. Speaking of Gilead, slavery, and the importance of mutual respect in loving relationships, Curry's sermon was one of the most moving portions of the ceremony. Discussing the complexity of humanity and love's role in moving it forward, Curry proclaimed, "Love is the only way. There's power in love. Don't underestimate it. Don't even over-sentimentalize it. There's power, power in love."

Markle, who was key in the decision to break from tradition and involve an  American bishop in the ceremony, was visibly moved by the speech. Given Britain's horrific role in slavery and colonization, Curry's sermon was a reminder that redemption is possible only when we allow love to lead and guide us in our lives.

4. The couple's actions and mannerisms spoke volumes about their affection for one another.

Of course, no one knows the ins and outs of Markle and Harry's relationship except them, but if the wedding was any indication, these two remind us that love can be so, so real. Endless research points to how body language often offers insights into a couple's relationship. From simple gestures such as Harry rubbing Markle's thumb during the ceremony to his loving words once she reached the alter, the two shared interactions that looked like they were pulled straight out of a fairy tale.

In times when love is often mocked or deemed impossible, their public display of affection were subtle reminders that there is magic and love and vulnerability, and it still totally exists.

In spite of a media that seemed to both question and criticize Markle's blackness, she incorporated her culture in some of the most beautiful ways. In addition to Curry's sermon, the Kingdom Choir, led by Karen Gibson, sang a stunning rendition of "Stand By Me" for the ceremony. Sheku Kanneh-Mason, a cellist handpicked by the royal couple moved the crowd with his renditions of Franz Schubert's "Ave Maria," Gabriel Fauré's "Après un rêve," and Maria Theresia von Paradis' "Sicilienne."

“It was such an awesome moment – just really incredible to perform for Prince Harry and Meghan at their wedding! T… https://t.co/TB4CF4WNmP
— Sheku Kanneh-Mason (@Sheku Kanneh-Mason)1526806605.0

Markle's effortless incorporation of her culture showed the world how proud she is of her roots, and it's a sign that her blackness will be centered in her public role in the U.K.

From endless fairy tale photographs to smiling faces around the room, Harry and Markle's wedding ceremony provided some much needed joy in a complicated world. Hopefully, it's just the beginning.