Meet the teacher who's trying to turn gunshots into camera shots.

His movement is a step away from gun violence and a step toward peace. 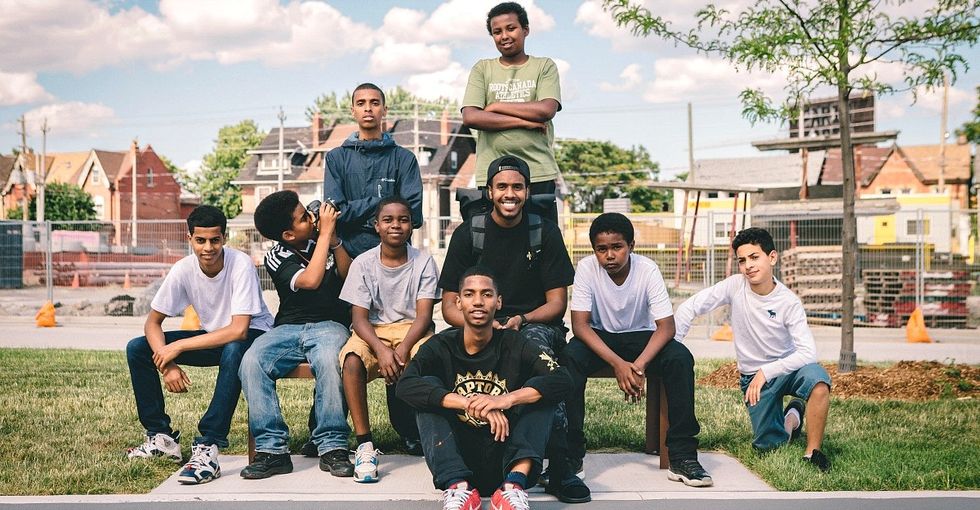 This teacher found a brilliant way way to respond to gun violence ... through a camera lens.

Photo by Yasin Osman/#ShootForPeace; all images used with permission.

Yasin Osman has lived in the crime-rattled neighborhood of Regent Park in Toronto, Canada, all his life and is thus all too familiar with gun violence. He's seen friends shot before his eyes and says most locals have had at least one friend or relative shot dead.

As Yasin grew up, he also grew tired of hearing the same gun-related stories over and over again. He wanted to find a way to change the conversation from one of fear and hate into one of art and creativity.

Yasin began a project called #ShootForPeace — an idea born out of a weekly excursion he took with kids from the neighborhood, several cameras, and the goal of teaching how to take great photos.

As a local early childhood educator and professional photographer, Yasin was the perfect person to lead this charge.

The project started because of a conversation he had with the kids about Instagram, Yasin told Upworthy.

"A few of the kids were asking me about my Instagram photos one day. They had very specific questions like 'How do you blur the background?' and 'How do you take a photo of a moving car?'" he explained.

"What sparked the idea for #ShootForPeace was because of how interested they were in the technical aspect of photography."

He formed a photography group made of 12 kids between the ages of 8 and 16 and started small — photographing Regent Park — but they quickly branched out to the surrounding neighborhoods, areas many of the kids had never even seen.

"The first week we had class, kids couldn't wait to get their hands on the cameras. They wanted to shoot everything, especially the CN tower. It was very inspiring," recalled Yasin.

The idea was to get the kids to see "shooting" as a creative outlet rather than a destructive one.

The classes are simple enough — they usually meet on Sundays and head to a predetermined spot where Yasin gives the kids a photography challenge.

Not only is Yasin seeing the kids' enthusiasm for photography grow, he's noticing they're becoming truly gifted "shooters."

For example, Mumu (short for Mutada), one of his youngest students, came to class not even knowing how to turn on a camera and would often take photos with the lens cap still on. Now, he's schooling some of the class' most esteemed photography mentors.

According to Yasin, when Charlie Lindsay (a well-known NBA photographer) came by one of the classes, he tried to explain to Mumu how to photograph a ball in mid-air without a blur only to be startled by Mumu interrupting him, "[you change the] shutter speed!"

"Charlie's face was priceless," Yasin recalls. "He looked over at me and said, 'How old are these kids and how are they shooting on manual already?'"

Yasin just laughed and told him the kids were geniuses.

The best thing about the class is that it's just as rewarding for Yasin as the teacher as it is for his students.

When you finally get the shot you've been waiting for so patiently. #ShootForPeace - see the rest on snapchat: riceandbananas

"My favorite thing is seeing the joy on their faces when they take a shot that they like and how eager they are to show one another. They remind me every Sunday why I love photography," said Yasin.

If this sounds like a project you'd like to bring to your own neighborhood, Yasin has some sound advice:

"Talk to the kids. Don’t start anything until you consult them and ask them what they’re interested in," he says.

Yasin fervently believes #ShootForPeace belongs to his students just as much  — if not more — than to himself.

Their ideas about how the class should be run are vital to its success, he said, and giving them ownership over the class means they'll give it their all when they show up, and the beautiful shots will keep on coming.