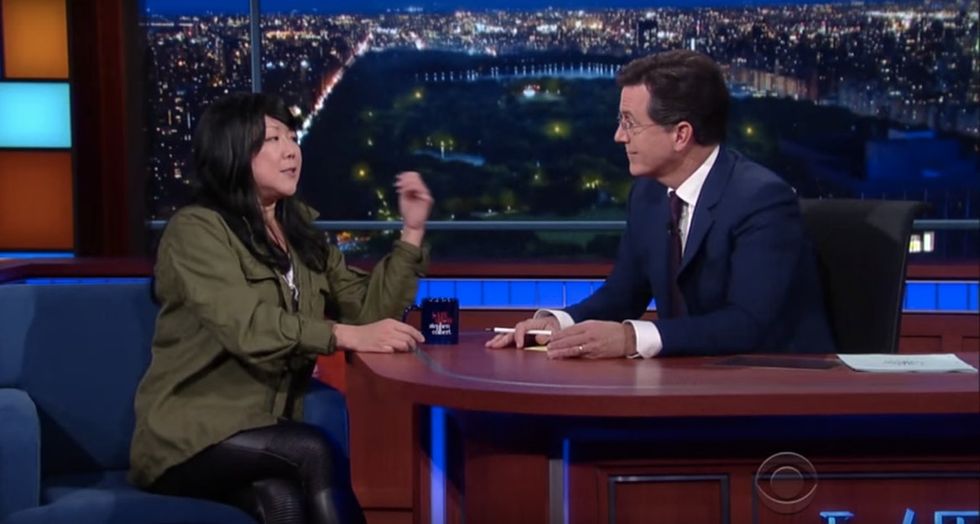 All GIFs from "The Late Show With Stephen Colbert."

If you're Stephen Colbert, or anyone for that matter, this is probably not the best way to introduce yourself. But when the late-night funnyman sat down with comedian Margaret Cho to talk political correctness and white fragility, it was hard not to come away thinking that maybe, just maybe, the duo was on to something with an introduction like that.

The interview began with Cho sharing a story about rescuing a friend's dog from a busy street.

She talked about how she ran into traffic to save the small dog, and how silly it probably looked to passersby:

"I realized it must've looked weird, this Korean lady running across four lanes of busy traffic to get a little dog. They must've been like, 'Oh, she must be hungry.'"

The joke actually played well to the audience, but a few nervous laughs and groans cut through, at which point Cho assured them it was OK to laugh:

That exchange with the audience prompted Colbert to ask Cho about political correctness in comedy.

"I'm so happy to make the racist jokes because I can," Cho said. Which is not a statement, I think, that most people can get behind. But Cho didn't stop there.

She elaborated, sharing how tough it was starting out as a stand-up comedian, listening to a litany of non-Asian comedians make jokes about Asian drivers. So she would get on stage and with just a few words, turn that joke around on the audience to make them question what exactly they were laughing at.

Cho's made a career doing this: challenging white fragility and questioning the status quo. But pushing boundaries isn't always easy, and no-holds-barred comedians take a lot of heat for disrupting norms. Couple that with the fact that what is or isn't funny seems to constantly be up for debate. Just ask Amy Schumer, who garners a mind-boggling mix of flak and praise almost every week for "Inside Amy Schumer," her sketch show that offers an edgy spin on gender and pop culture.

Cho suggested that audiences have become increasingly aware of their own prejudices as more performers of diverse backgrounds and identities share their stories.

And the popularity and critical acclaim of shows like "Empire," "Transparent," "Fresh Off the Boat," and "Blackish" show audiences don't mind the rude awakening.

That's when Colbert raised a point worth repeating.

He asked Cho whether it would help if everyone entered conversations with the following mindset:

"Yes," Cho replied. And that's when Colbert introduced himself as "probably a racist."

While calling yourself "probably a racist" might feel a little extreme, Colbert's general approach actually makes a lot of sense.

We all have a unique lens we use to see the world. It's a combination of race, gender, class, beliefs, and lived experience. While it makes us distinct and interesting, it also makes it nearly impossible for us to completely understand what it's like to exist as a person of a different race or identity. But that's OK because we have something pretty amazing on our side: empathy.

If we enter conversations from a position of "I am not an expert on anyone else's lived experience, but I am here to listen, learn, and stay open to new perspectives and ideas," then together, we can make some pretty great stuff happen. And not just comedy and late-night TV shows, but the big stuff too.

Isn't it amazing what an open mind can do?

Will you say it one more time for the people in the back, Stephen?

Watch Margaret and Stephen spill the tea about racism and political correctness in this clip from "The Late Show" here: