Look at this glacier in Alaska as it disappears over the course of a century and try not to go whoa.

When I first looked at these, I thought, "Well maybe it's a different, hotter season in the picture where there's not any ice." It's not. 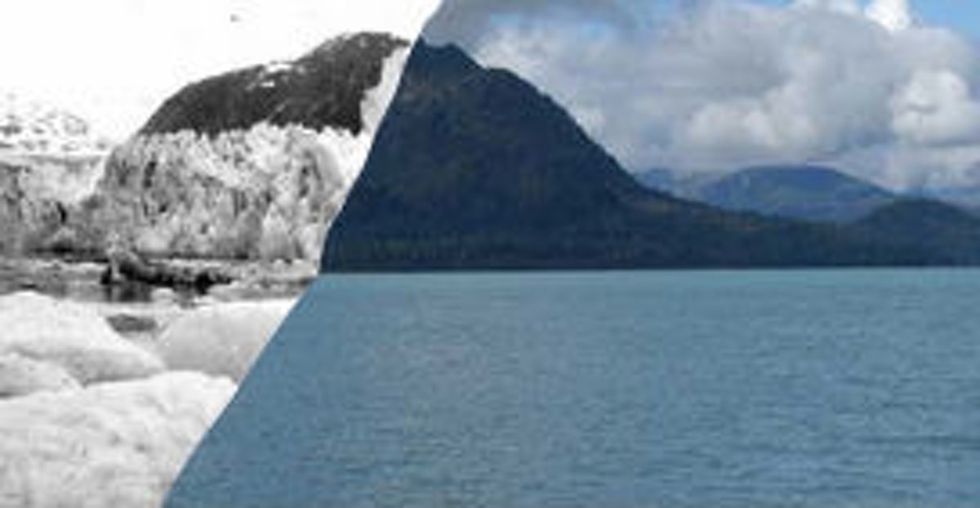 Take a look at these four images and then choose your own adventure. Ready?

Scroll with me to the frontiers of...

Here is the Muir Glacier and Inlet in Alaska.

The black-and-white picture is from Sept. 2, 1892. Guess when the color photo is from.

Below, the black-and-white photo of the Muir Glacier and Inlet is from the 1880s or '90s.

Oh wait. These are GLACIERS? In Alaska?

Let's play a little choose your own adventure.

What happens if we, the Earthlings of Earth, do nothing?

Let's suppose that climate change is either happening or not actually happening (despite overwhelming scientific consensus, BTW).

1. If climate change is not really happening ... we're fine. (Even though there is overwhelming scientific consensus that it IS happening, so it might seem a little silly for us to think that it's not happening ... but we're doing a thought experiment!)

2. If climate change is actually happening and we do NOTHING ... we have economic, social, political, environmental, and health catastrophes the likes of which have never been seen on Earth. :( Basically, the world as we know it is dunzo.

I do not choose this adventure!!!

What happens if we, the Earthlings of Earth, take action?

1. If climate change is not really happening ... we'll have spent lots of money investing in clean energy that has been proven to create tons of jobs. It might strain our economy, but there will be more jobs because we'll be investing in new industries. So we'll have more jobs and the air will at least be nicer.

2. If climate change is actually happening ... we'll have spent money in exactly the right place, breathing will be awesome, people will have jobs, and we'll be fine. It's a simple adventure because it's simple. Doing something about climate change simply prepares the world for easy livin'.

I CHOOSE ADVENTURE B2!!!