Kids and the elderly go together like peanut butter and jelly! Some nursing homes are catching on.

Finding a nursing home with a program like this could benefit your loved ones' well-being. 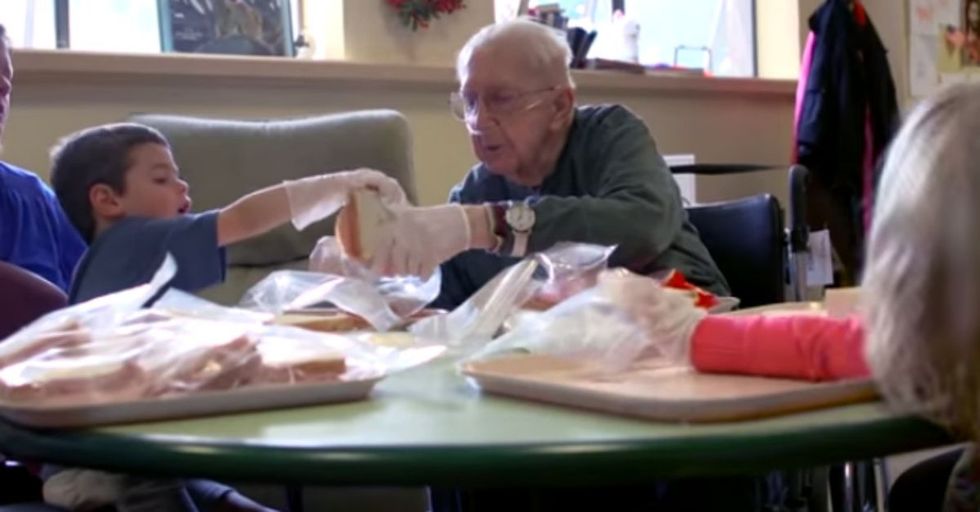 It's one of the side effects of aging that the elderly often find themselves needing the care a nursing home provides but having to accept the isolation from the rest of the world that goes with it. Nobody likes feeling lonely, but it ties into a bigger problem — isolation can factor into a person's actual health:

"Water is running out of my eyes" — a nursing home resident talks about his emotions. Image via "Present Perfect."

Children can miss out on a lot if they don't get to spend time with the elderly: exercising empathy, the satisfaction of helping others, and gaining a frame of reference for the big picture of their own lives. We're all going to get old! We're all going to need Medicare and Social Security one day. But we can forget that when we don't have enough chances to associate with older generations. All of which defines:

Problem #2: Children these days often don't get the benefit of interacting with the elderly.

A couple of smart programs are solving both of those problems at once.

— College kids can live rent-free in one nursing home in the Netherlands.

At the Humanitas nursing home, one rule is that the college-aged residents must spend 30 hours monthly being "good neighbors" to the elderly residents. That can mean watching a game together on TV or spending time with them when they're ill, which is crucial for helping someone sick keep their spirits up. It can also take the form of birthday fun.

She's celebrating her 77th birthday! This nursing home resident is not in the Netherlands, but this gives an idea of the joy of having someone to bring you delicious treats and love on your birthday. Image by Jack/Flickr.

The other rule is that the college-age residents can go about their lives as they wish as long as they aren't disruptive to the nursing home residents, which isn't hard. Many of the residents are hard of hearing, as the head of Humanitas quipped to PBS Newshour.

— Another nursing home in Seattle hosts a day care, and intergenerational programs a bit similar exist at about 500 nursing homes across the country.

The Providence Mount St. Vincent nursing home in Seattle cares for up to 400 residents, and it also houses an Intergenerational Learning Center program for children ages 6 weeks to 5 years.

Evan Briggs, a documentary maker who is producing a film about the mutual benefits of pairing the young and the old, filmed the Seattle nursing home and relayed a story in her Kickstarter:

"Everyone had just finished a rendition of “You Are My Sunshine" when one of the residents began to share a memory he had of singing that very same song late at night on a bus full of soldiers while serving overseas during World War II.

The clarity with which this gentleman recalled this era of his life so many years ago was breathtaking- the memory seeming to appear before his eyes as he spoke. And though the kids were too young to understand his words, the fact that their presence provided a catalyst for his recollection just seemed to fit in a 'circle of life' kind of way."

The combining of young people and the elderly results in a surprising melange of moments, as the following film trailer portrays. Some are sweet, and some are frustrating. But they are all very honest and important in developing and maintaining a sense of humanity.

Could we be doing more of this kind of stuff in our communities? Why not bring this idea to your local nursing home and see what happens?