Jessica McCabe has ADHD. Her message to her mom is tearful and moving. 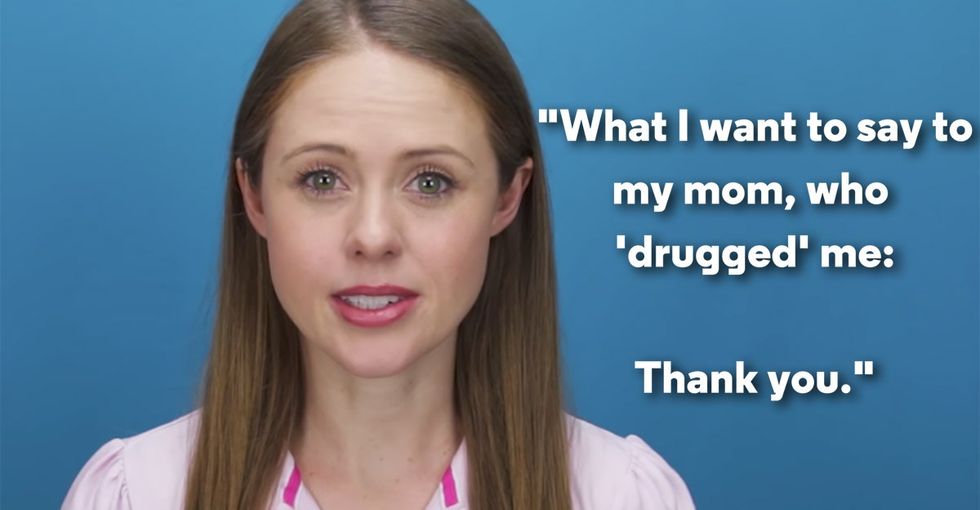 "This is what I want to say to my mom, who 'drugged' me," Jessica McCabe begins in a voice-over.

McCabe's face pops up on the screen, earnest and direct as she finishes her statement: "Thank you."

GIFs from How to ADHD/YouTube.

The video is the latest in McCabe's series on life with attention-deficit hyperactivity disorder (ADHD). In this heartfelt video, McCabe explains how her mom stepped up to help her get treatment.

ADHD affects about 11% of children in the United States, and while the symptoms are often misunderstood, ADHD can make it hard for kids to focus on things that are uninteresting to them, or it can make them hyperactive and fidgety. School, with its standardized learning environment, can be particularly difficult for kids with ADHD. Her voice cracking, McCabe recalls how much she struggled in school as a result of her ADHD before she got help.

Unfortunately, there's a lot of stigma around how (or even if) parents should treat their kids' ADHD. Some people even believe ADHD isn't real at all. As a result, many parents who choose to put their kids on medication find themselves accused of, as McCabe said, "drugging" their children.

McCabe wants her mom to know how much she appreciates her making sure McCabe got the help she needed.

In the video, McCabe recounts how she and her mom worked together to find a psychiatrist and medication that worked for her. It's because of her mom, McCabe says, that she was able to actually focus in school again and was able to avoid so many of the pitfalls that other people — whose ADHD goes untreated and undiagnosed — have to run into.

What really mattered to McCabe wasn't just the treatment, though.

It was the simple fact that her mom listened when she asked for help.

It hurts when someone doesn't believe you, especially if that person is your parent. But McCabe's mom didn't think she was being lazy or just not trying hard enough. She listened when her kid asked for help. And that mattered.

"You believed me," says McCabe. "And when you did, when you took me to a doctor who could explain to me what was going on in my brain, you took away so much shame."

Medication helped McCabe, but everyone's brain is different. If you're living with ADHD or think you might be undiagnosed, you should work with a professional to find a treatment plan that works for you.