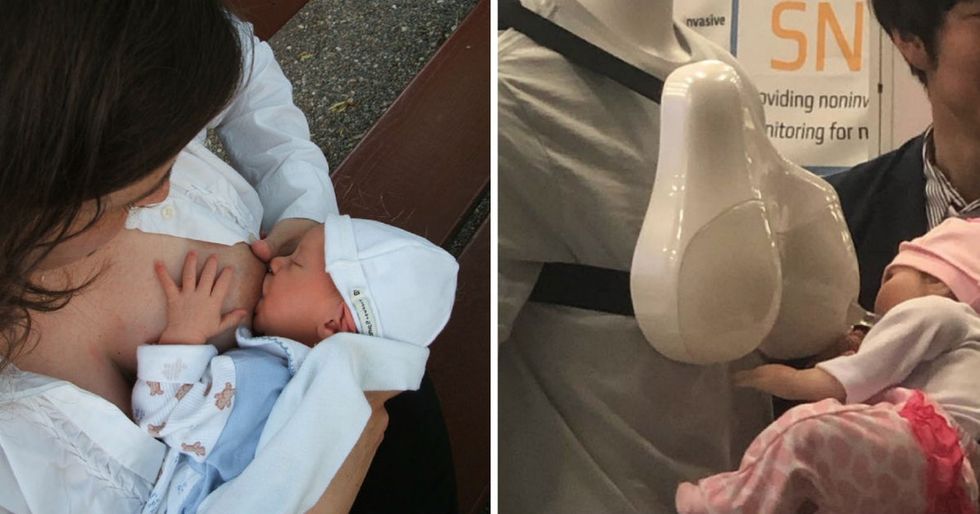 Breastfeeding has astronomical benefits for infants, but it can be extremely difficult in the early stages.

Nursing an infant can be mentally and emotionally taxing for nursing parents, a factor that discourages many. Even though breast milk is full of health benefits, it's not always fun or possible.

And while The World Health Organization advises parents to aim to breastfeed their children for a minimum of six months, there are many social, and economic factors that make that a challenge.

For lactating parents, it’s often one more thing to add to a list of overwhelming daily responsibilities. I've been breastfeeding off and on for the last three years of my life (and counting). While I'm immensely grateful for a life that supports my ability to breastfeed, it can definitely slow me down.

Thankfully, a Japanese company has created a new, wearable device that enables non-lactating caregivers to breastfeed so that they can more easily share in the feeding responsibility.

It's called the “Fathers Nursing Assistant,” and it's aimed at allowing fathers to breastfeed — but of course, it can work for anyone.

The device functions very much like a natural breast: It has a tank and a nipple style opening that allows infants to access milk in the same way they would from a naturally lactating parent.

But it's not just about easy use. All parents deserve the opportunity to bond during feeding regardless of gender. This device allows them to do that.

One of the most unique benefits of breastfeeding is the ability to be physically close to a nursing child.

Although children still receive nutrients while being bottle-fed, they crave the closeness that breastfeeding provides. It’s also just an excellent way to calm a fussy infant.

Fathers Nursing Assistant, was one of many items to debut in Austin, Texas at the South by Southwest (SXSW) festival.

It was originally developed to make breastfeeding more egalitarian. But there's so much more to it than that.

As if reducing the emotional labor in balance involved in breastfeeding wasn't enough, the innovation also tracks baby's sleep and eating patterns and compiles the data to be viewed on an app.

This device has the potential to increase feeding options for dads as well as other caregivers who are not currently producing breast milk. And it's particularly useful for anyone who craves the proximity benefits of breastfeeding.

Interestingly, Fathers Nursing Assistant isn’t the first time a device was developed to increase equality in the responsibility of infant feeding. But it is, so far, the most simple and only non-hormonal option.

Egalitarian breastfeeding is important because it brings us closer to the equal division of household and parenting responsibilities. Fathers Nursing Assistant is one of many tools — like access to paternity leave and changing tables in men's restrooms — that reinforces the importance for all parents regardless of gender — having the chance to bond and engage meaningfully with their children.