It's not just keeping you up. Light pollution is doing real damage. It's time to act. 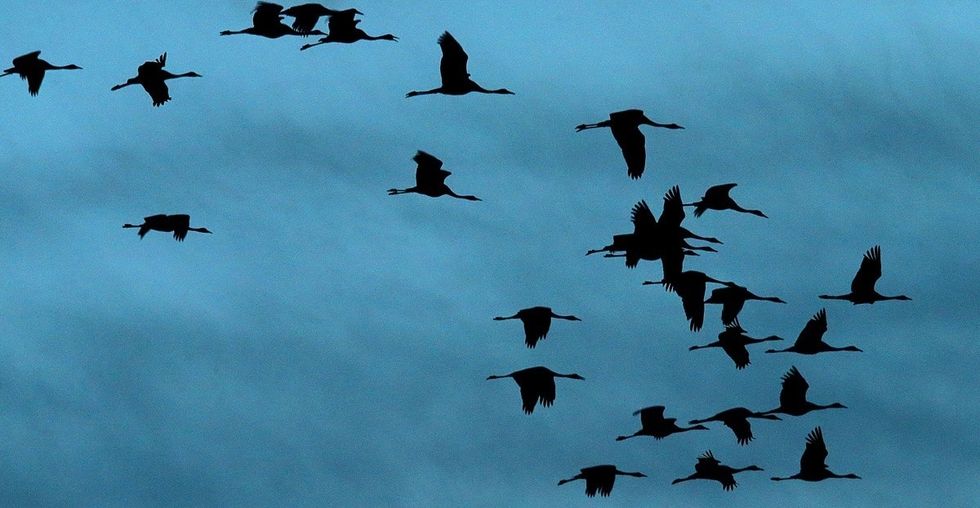 When an earthquake hit the San Fernando Valley in 1994, the power went out all over Los Angeles.

The quake struck just before dawn. And suddenly, phones started ringing at the local Griffith Observatory. People were worried because they thought the night sky looked strange.

Turns out, due to the power outage, these frightened Angelenos were simply seeing the stars for the first time!

"The stars were in fact so unfamiliar, they called us wondering what happened," observatory Director Ed Krupp told the Los Angeles Times.

Sadly, because of light pollution, residents of Los Angeles aren't alone in their shock over the real night sky anymore.

A U.S. Marines armored vehicle during a night operation in Afghanistan. Photo by Dmitry Kostyukov/AFP/Getty Images.

Light pollution is the brightening of the night sky by man-made sources.

It's everything from street lights to outdoor lights on homes. And since the incandescent bulb was introduced more than 100 years ago, it's been getting increasingly difficult to see the night sky.

As I was working on this story, I thought about the last time I could clearly see the stars. I remembered seeing the Big Dipper from the backyard of my childhood home, but that was years ago. And I couldn't remember anything since.

Had it really been so long since I'd seen a clear view of the night sky? It's actually pretty likely.

It's estimated that nearly one-third of the human population, including 80% of Americans, can no longer see the Milky Way. That's our home galaxy, whose spiral band of white stars resembles spilled milk.

The Lyrid meteor shower and the Milky Way in the clear night sky of Thanlyin, Myanmar. Photo by Ye Aung Thu/AFP/Getty Images.

Why is this starry absence so important to consider?

I wanted to see what I was missing, so I went to my local observatory, the Haggart Observatory at Clackamas Community College. Once a month, volunteers open the observatory's large telescope and observation decks to the public.

When it was my turn, my group walked up the steep stairs to the first observation deck, then through a door in the floor to the top of the observatory.

It was pitch black. I couldn't see my own hands, let alone anyone else in my group. We took turns stepping up to the eyepiece on the large telescope. It was one "Wow," after another, as we each had a chance to see Saturn and her beautiful rings.

All at once, I understood why the sudden spray of stars likely alarmed the people of Southern California. It's beautiful. It's breathtaking. And there's simply nothing else like it.

The Milky Way towers over U.S. Marines near their compound in Afghanistan. Photo by Dmitry Kostyukov/AFP/Getty Images.

When we can't see the stars, we don't just miss out on awe-inspiring natural beauty.

We also miss out on a fascinating, almost spiritual part of the human experience.

"To me, I think we're robbing ourselves of our human soul that we've had for eons," said Dawn Nilson, volunteer Dark Sky Preservation director for Portland's Rose City Astronomers. "If you look at all the artwork going back thousands of years ... there's a relationship with the sky, with the stars, and our whole body's built on it. I mean, where would Van Gogh have painted a starry night if he didn't see a starry night?"

Just like other types of pollution, light pollution is something we should work to reduce.

"Being able to see the Milky Way, to see the stars, is incredibly important. But people don't see that as important as say, pollution in a river that's killing fish," said Cheryl Ann Bishop, communications and public affairs director for the International Dark-Sky Association.

Like trash in the water and smog in the air, light pollution is taking a serious toll on many species of wildlife.

Male tree frogs croak at night as part of their mating behavior, but the glare from artificial lights is disrupting this breeding ritual and interfering with reproduction, which may lead to a drop in population. Many amphibians hunt after dusk, but they may stay hidden if their area is well-lit, adversely affecting the amount of food they can eat.

A tree frog sits on a branch in Maryland. Photo by Mark Wilson/Getty Images.

Mary Coolidge, BirdSafe campaign coordinator for the Audubon Society of Portland, Oregon, told me that most songbirds travel at night. It cuts down on turbulence, they can avoid predators, and they can use the moon and stars to navigate. But light pollution is starting to inhibit their migration patterns.

"When they come to areas where there's quite a bit of sky glow because of unshielded lighting in the city, that really drowns out those cues for them," Coolidge said. And since many of the birds are attracted to light, streetlights and illuminated skyscrapers can be especially dangerous.

It's not just animals, either — our obsession with bright lights is also affecting human health.

Cities across the nation are replacing existing streetlights with LEDs, which are more energy-efficient and last longer. But LEDs have a high color temperature (around 4,000 to 5,000 Kelvin) and a high level of short-wavelength blue light. This can cause intense discomfort and severe glare and can actually be dangerous to walk or drive in at night.

The bright lights can also suppress melatonin, the hormone that controls our internal sleep-wake cycle. This can cause excessive sleepiness and impaired daytime function.

The moon behind a newly installed LED streetlight in Las Vegas. Photo by Ethan Miller/Getty Images.

While the problem of light pollution is big and far-reaching, the fix is relatively simple.

To cut down our own contributions to light pollution and skyglow, we can each do a home audit of outdoor lighting.

"That's the first thing people can do is look around their homes to make sure their lights are dark-sky friendly," Bishop said. "One of the most important things is to make sure [lights] are fully shielded because a lot of lighting and a lot of security lighting ... it's not going down on the ground, where it's actually needed; it's going up in the sky, which serves no purpose and just wastes energy."

The International Dark-Sky Association estimates that 30% of outdoor lighting in the U.S. is wasted, going up into the sky instead of down on the ground, resulting in $3.3 billion in unnecessary energy expenditures and 21 million tons of carbon dioxide a year.

Why aren't people doing this already? "The hardest part is that most people don't know what they're missing, so it's not an issue to care about," Nilson said.

Whether we're doing it for wildlife, our health, future generations, or everyday inspiration, the night sky is something worth fighting for.

Do yourself a favor this summer and find a place to stare at the night sky. I bet you'll be pleasantly surprised by the beauty you see.