It's not garbage if you eat it. How I made a gourmet meal with food scraps. 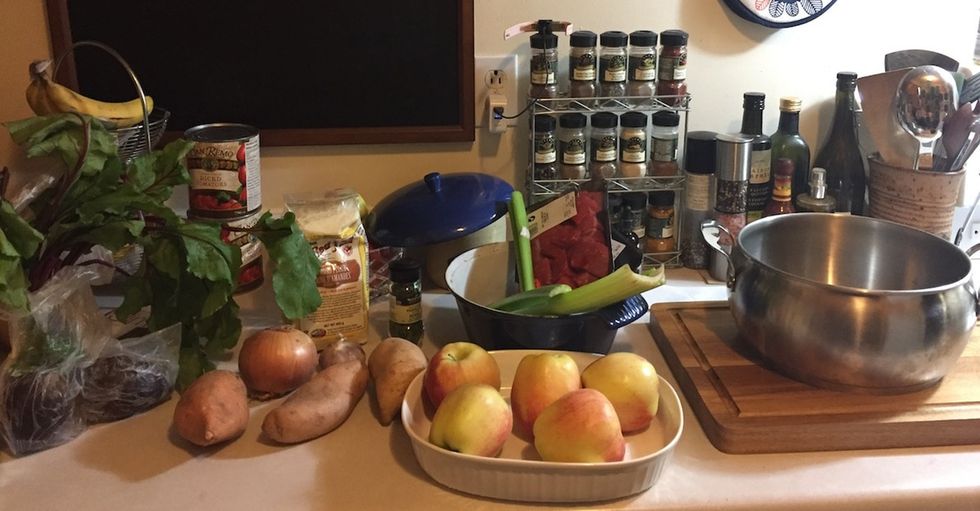 True
Ad Council - Save The Food

I'm Heather. I'm a single woman living alone, and just like you, sometimes I buy too much food.

For the longest time, I didn't think much of it. I'd get overeager at the grocery store and come home with more food than I could eat or preserve. When some of it went bad, as food inevitably does, I threw it out.

Then I started learning more about climate change, pollution, and food waste. I discovered that my dirty little secret of throwing away food wasn't mine at all. Lots of us do it, and that's adding up in massive ways.

According to the U.S. Department of Agriculture, Americans wasted 133 billion pounds and $161 billion worth of food in 2010 — about 30% of the national food supply.

That kind of waste affects many aspects of American life. 40% of all food in America never gets eaten, and the average American family of four loses $1,500 a year on wasted food, with each individual throwing away over 24 pounds of food per month. Food going to landfills could be provided to some of the millions of Americans with food insecurity; instead, along with yard waste, it accounts for 27% of waste products sent to city landfills. As it rots there, it creates methane, a dangerous driver of climate change.

I felt guilty but inspired. It was time to try and shrink my food footprint.

Over the last few months, I've become a lot more conscious of the amount of food I buy. I'm making weekly meal plans to ensure I'm not buying things I won't need. I've also started composting — and made many new fruit fly friends in the process.

But I knew I could do more. What about the bits of food that come with produce and meat I buy that inevitably end up in the compost or garbage? Shouldn't I be finding a use for them, too? According to this video from Save the Food, a campaign by the Ad Council and the Natural Resources Defense Council to encourage Americans to reduce food waste in the U.S., that answer was definitely yes:

I decided to challenge myself. I'd cook a full meal of recipes based around the scraps of food I usually toss in the compost or the garbage. I'd try to use even the bits of food I wouldn't usually even consider food. I’d document my progress, feast on the fruits of my labor, and bring you, dear reader, along for the trip. Are you ready? Let’s ride.

Indeed it must. Image via Heather Libby/Upworthy.

If I were the good hipster my Tinder profile says I am, I’d be consuming bone broth regularly for its collagen-loving, immune-boosting health benefits. Plus, it’s a great way to get more use out of bones after a meal.

These bones were left over from a rib dinner a few weeks ago — I stored them in the freezer in anticipation of this meal. After I thawed them out, they spent the night in a stock pot on low heat. In the morning I added some spices, celery, and onion and let it continue simmering. My apartment smelled amazing, and my cat was very confused.

Unfortunately, I forgot just how much of my broth I needed for my main course, and after it simmered down, I only had a tiny bowl's worth left for this course. Nonetheless, it was lovely, and I felt like a giant drinking it. If you want to try making a broth of your own from scratch, here's a tasty recipe for homemade chicken stock.

The salad course: Beet greens are also a food!

Before this meal, I’ve never intentionally or willingly eaten a beet green. Not because I didn’t want to but because I didn’t know I could. Turns out, I should have been doing this for a long time because beet greens have lots of vitamins and minerals — and they're pretty tasty too!

Important note: If you’re going to eat beet greens, be sure to cook them first as they are surprisingly bitter in the raw. Some recipes recommend blanching, but I just gave them a quick sauté in olive oil, crushed garlic, and red pepper flakes for a warm green salad. It was absolutely delicious — like a denser, heavier version of cooked spinach. I'm already looking forward to having it again.

I’ve only recently learned that my fridge drawers have special functions for keeping food at its utmost freshness. I’ve also started to embrace that not every perishable food needs to immediately go to the fridge. Unfortunately for a few sweet potatoes and a forgotten yam, those realizations came a little too late.

Fear not, squishy veggies: You shall rise again! Image via Heather Libby/Upworthy.

I looked online and found that these tough tubers, despite their depleted moisture content, were still perfectly safe to eat. Chopped up to supplement a big hearty beef stew, you’d hardly guess that they used to be the veggie equivalent of a fashion "don’t." (Another great way to use up vegetable scraps is to turn them into delicious veggie broth.)

This beef stew was a great solution for helping to empty my larder. To my thirsty tubers, I added some neglected celery and some heirloom carrots that had gone a wee bit rubbery with age. Once they were cooked up with some well-browned beef, most of my stock, and some spices, they helped make a delicious winter stew. Even though it took forever to cook (wherefore art thou, slow cooker?), it was rich, savory, and filling.

My inner hobbit was impressed with my culinary expertise. GIF via Heather Libby/Upworthy.

Food saved: 1 pound of slightly shriveled yams, sweet potatoes, and carrots plus some orphan celery stalks and the beef stock from the soup course.

The dessert course: Ambrosia apples a la floor, then a la crumble.

Ambrosia apples are my candy; I would happily trade them for chocolate almost any day. So, when I brought home my bag of perfectly-selected ambrosias — and promptly spilled them all over the floor, I was pretty gutted. My gorgeous apples were very bruised with lots of soft spots. I needed to do something with them right away.

Fortunately, I had some almond flour and gluten-free oats in my pantry. Now, instead of an afternoon snack, my beloved ambrosia apples became the showpiece of a rare special dessert — a naturally-sweet gluten-free apple crumble.

This crumble was, dare I say, ambrosia. Image via Heather Libby/Upworthy.

I’d originally planned on serving my crumble with some non-dairy "ice cream" made from pureed frozen bananas, but the ones in my pantry absolutely refused to go bad on time for this article. That said, if you have some less-than-impressive bananas in your pantry or on your counter, I strongly recommend you try the false ice cream on your own. It’s one ingredient, takes seconds to make, and will make any lactose intolerant person weep tears of non-dairy joy.

While a four-course meal isn't feasible every day, I know that some of the tricks I learned will become a regular part of my cooking routine.

Even though this challenge took quite a while — including prep and cleaning, about three hours — I was having so much fun that it kind of sped by. I watched old episodes of "Scandal" and "Last Week Tonight" while I chopped produce; my cats, Fezzik and Rupert, stayed off the counter for the entire evening; and I got to enjoy a really satisfying home-cooked meal that left me with plenty of freezable leftovers for future meals.

Even better, I helped keep about two and half pounds of food I would have considered scraps out of the landfill and compost.

Would I do this again? Absolutely. Should you do it, too? In the spirit of reuse, I'll say again: Absolutely.