It's called 'delayed drowning.' Here are 4 key warning signs plus the single best way to prevent it.

It's all over the news, but don't panic. Just learn how to spot the signs. 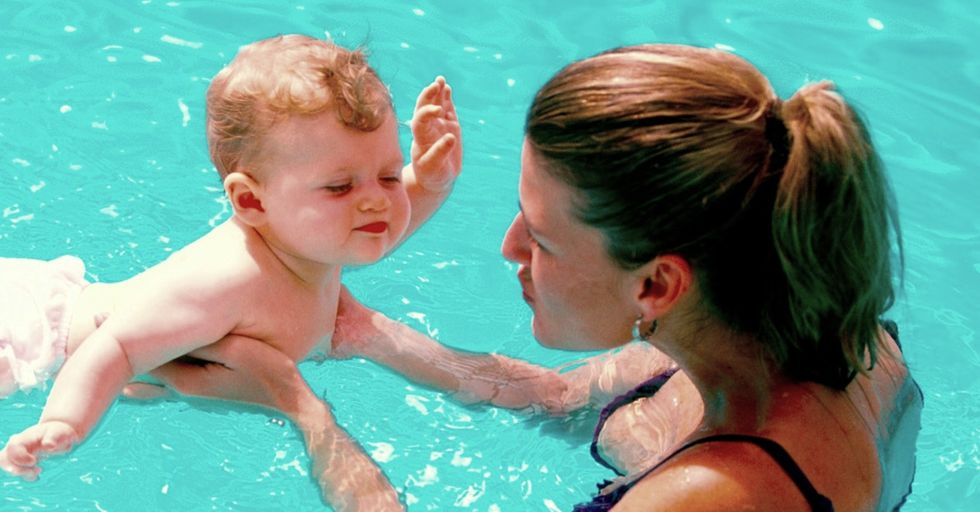 He had a short coughing fit, toweled off, and then went home. No big deal.

Or so his parents thought.

A few hours later, after going down for a nap, Johnny passed away.

In 2014, a toddler named Ronin came frighteningly close to the same fate. He slipped briefly into a pool before being pulled to safety by his mother. Ronin was shaken up but seemed fine.

Later that night, he lay stretched out in an ambulance as it screamed toward the hospital, where he arrived just in time.

Stories like these have resulted in an outburst of news coverage around what's being referred to as "dry drowning." But that's a bit of a misnomer.

Since we're entering the season of pool parties and beach trips, here are a few things you really need to know about what actually happened to Ronin and Johnny.

Ronin is doing great, by the way. Here he is learning how to swim. Photo from Delighted Momma, used with permission.

First, there is a difference between dry drowning and delayed drowning.

With dry drowning, water never enters the victim's lungs. Rather, it causes the vocal chords to spasm and shuts off airways without actually filling the lungs with water. Otherwise, it looks a lot like normal drowning because it occurs in real time and causes asphyxiation.

Delayed drowning, sometimes called secondary drowning, is a bit different. In cases like Ronin and Johnny's, water gets into the lungs in small amounts — not enough to disable breathing right away. Instead, it sits there and inhibits the lungs' ability to oxygenate blood. From there, the victim starts to have more and more trouble breathing over the course of several hours.

Second, drowning doesn't look the way it does in the movies.

Whether you're dealing with normal, dry, or delayed drowning, don't expect a dramatic scene full of thrashing, coughing, and yelling.

According to Dr. Anna Mendenhall of the Children's Physicians Medical Group, 9 out of 10 children who drown do so even though they were being supervised by a parent because it's so easy to miss the signs.

Here's what you need to look for, even hours after you've left the pool or beach:

Most likely these symptoms will go away over time. But if they don't or they get worse, you might want to call your pediatrician on the way to the emergency room.

And the best way to watch for drowning in the moment? Get in the pool with your kids and stay within an arm's reach. It's the only way to make sure you don't miss anything.

Watching from the patio is a no-no. Get in the pool! Photo from Thinkstock.

Third, don't panic. Delayed and dry drownings combined make up only 1% to 2% of all drowning incidents.

There's no getting around it. This is really scary stuff, especially to a parent.

I have a 2-month-old daughter, and my first reaction to all of this is to literally never let her near a swimming pool. Ever.

But as scary as they are, these unusual cases are just that — unusual.

It's a really good idea teach your kids about basic water safety and get them comfortable in the pool with swim lessons at an early age (experts say 4 or 5 is a good age to start). But I'll say it again:

The single best thing you can do to protect a child from drowning — wet, dry, or otherwise — is to get in the pool with them.

As long as you're prepared, pools can be great for fun things like throwing your children! Photo from Thinkstock.

At least until they're old enough to be embarrassed by your presence.