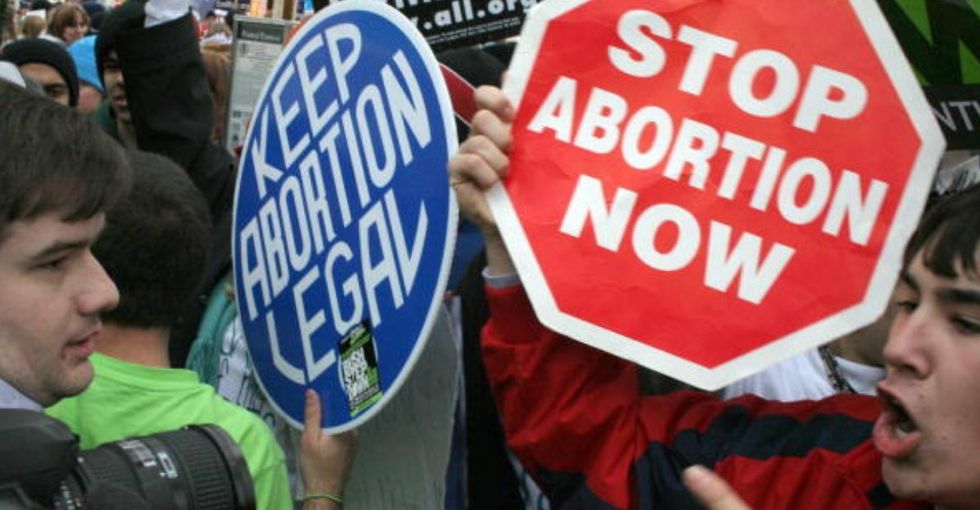 It is entirely possible to be morally anti-abortion and politically pro-choice without feeling conflicted about it. Here's why.

There's far too much gray area to legislate.

No matter what you believe, when exactly life begins and when “a clump of cells" should be considered an individual, autonomous human being is a debatable question.

I personally believe life begins at conception, but that's my religious belief about when the soul becomes associated with the body, not a scientific fact. As Arthur Caplan, award-winning professor of bioethics at New York University, told Slate, “Many scientists would say they don't know when life begins. There are a series of landmark moments. The first is conception, the second is the development of the spine, the third the development of the brain, consciousness, and so on."

But let's say, for the sake of argument, that a human life unquestionably begins at conception. Even with that point of view, there are too many issues that make a black-and-white approach to abortion too problematic to ban it.

One reason I don't support banning abortion is because I've seen too many families deeply harmed by restrictive abortion laws.

I've heard too many stories of families who desperately wanted a baby, who ended up having to make the rock-and-a-hard-place choice to abort because the alternative would have been a short, pain-filled life for their child.

I've heard too many stories of mothers having to endure long, drawn out, potentially dangerous miscarriages and being forced to carry a dead baby inside of them because abortion restrictions gave them no other choice.

I've heard too many stories of abortion laws doing real harm to mothers and babies, and too many stories of families who were staunchly anti-abortion until they found themselves in circumstances they never could have imagined, to believe that abortion is always wrong and should be banned at any particular stage.

Most people's anti-abortion views—mine included—are based on their religious beliefs, and I don't believe that anyone's religion should be the basis for the laws in our country. (For the record, any Christian who wants biblical teachings to influence U.S. law, yet cries “Shariah is coming!" when they see a Muslim legislator, is a hypocrite.)

I also don't want politicians sticking their noses into my very personal medical choices. There are just too many circumstances (seriously, please read the stories linked in the previous section) that make abortion a choice I hope I'd never have to make, but wouldn't want banned. I don't understand why the same people who decry government overreach think the government should be involved in these extremely personal medical decisions.

At this point, the only things consistently proven to reduce abortion rates are comprehensive sex education and easy, affordable access to birth control. If we want to reduce abortions, that's where we should be putting our energy. The problem is, anti-abortion activists also tend to be the same people pushing for abstinence-only education and making birth control harder to obtain. But those goals can't co-exist in the real world.

Our laws should be based on reality and on the best data we have available. Since comprehensive sex education and easy, affordable access to birth control—the most proven methods of reducing abortion rates—are the domain of the pro-choice crowd, that's where I place my vote, and why I do so with a clear conscience.

From Your Site Articles
culture
Family