The news getting you down? These awesome, selfless acts should pick you back up. 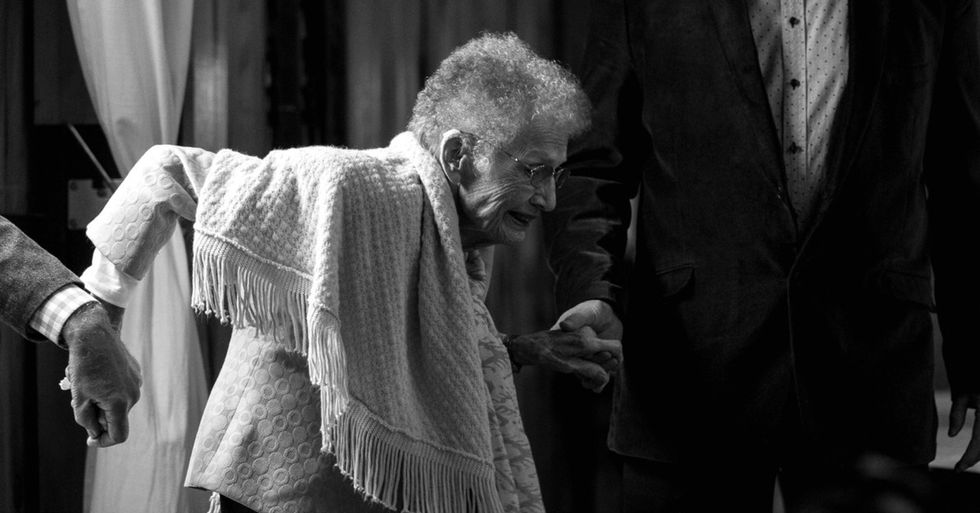 When was the last time you witnessed a genuinely selfless act?

Maybe someone held the door for you when your arms were laden with groceries, or perhaps you happened to see someone run into the street and grab a child's bike so that it didn't get hit by an oncoming car. No matter the size of the gesture, these purely altruistic moments probably left you feeling just a little bit better about humanity as a whole.

It's important that we don't forget about these moments, no matter how small they may be, especially in the midst of all the discord and divisiveness going on in America today.

Sometimes there are days when the news can seem so overwhelmingly negative that it can feel like there's nothing remotely good going on in the world anymore. Those days are when it's the easiest to stop trying and just give into jadedness.

However, those days are also  when it's most important to do something — anything — kind in order to remind yourself, and whoever you're helping, that, despite all the conflict out there, people are inherently compassionate.

We have the power to make the world a better place. All it takes is a moment of thoughtfulness for someone else.

Here are 5 acts of kindness that people experienced first-hand to help motivate you to do something altruistic today.

1. Chris Cucchiara, a personal trainer from San Jose, California, watched his roommate give a vital gift to a homeless person.

"About two weeks ago, I was driving with my roommate, and we saw a homeless guy without shoes," writes Cucchiara in an email. "I was driving, but my roommate, who had fairly new shoes on, took off his shoes, got out and gave them to the homeless man. I had sandals in the car so I just gave them to my roommate to wear for the rest of our trip into town and back to our house. I felt honored to witness that act."

When you can afford several pairs of shoes, it's easy to forget how much just one pair can mean to someone who has none.

2. These wedding vendors all decided to offer their services free of charge to a couple who lost a lot in two devastating hurricanes.

Anne Bequette, took newlyweds Marty and Lauren's engagement photos a year ago in the midst of a devastating scene. Their hometown of St. John in the U.S. Virgin Islands had been hit hard by Hurricanes Irma and Maria, but their love story managed to survive the storms.

However in the year that followed that photo shoot, Marty lost his job in the boat charter industry because of the steep drop in tourism, and Lauren lost hers because the resort that she had worked at had been completely destroyed.

When Bequette heard about this, she decided to do what she could to give the couple the wedding they deserved despite the fact that they couldn't afford it.

"After hearing their story, LLG Events was touched and immediately began planning," explains Carly Long, who works for LLG. "They first enlisted David Kimmel Design to come on board for pro bono floral design. Then, the team received a hopeful email from Marta Santamaria, owner of The Venue and The Ridge in Asheville, North Carolina, which also happened to be where Marty's family resides. Marta wanted to be involved in any capacity, willing to donate both of her venues and provide catering, linen, staff and more for the event."

This generosity was contagious. More and more wedding vendors were inspired to lend a hand until the entire wedding was taken care of.

"What Marty, Lauren and their island community experienced was unimaginable, and to get to see firsthand a bit of redemption in their lives on Saturday night after all they've lost was just beautiful," writes Erica Berg of Collective Music Solutions in an email. She ended up donating a guitarist for the ceremony and DJ'd the reception herself.

3. Grant Wiley from Atlanta, Georgia, witnessed his friend pull people from car wrecks not once, but multiple times in a year.

"I have a friend, Joelle, who, over the last year, has pulled two people out of car wrecks." writes Wiley in an email. "One was a flipped car, the other a head on collision with a pole. And a month ago, after a third accident, in which one of her neighbors was hit by a pizza delivery van, Joelle tried for 20 minutes to keep her alive using basic resuscitation skills she happened to know. She never left her side, even though her neighbor died in her arms."

He continues, "She went a step further this weekend. The police had left spray paint marks all over the road, where her neighbor had been hit. It was in front of the neighbor’s house and the family had to see it every day. In the middle of the night, she went and scrubbed the paint off the road so that they wouldn't have to do it."

It may seem like a small kindness, but Joelle's efforts no doubt gave her neighbor's family some respite from the pain of losing a loved one.

4. Gary Gach, an author from San Francisco, saw not one, but several good Samaritan strangers help an old man when he was in trouble.

"I was standing on a corner, waiting for the light to change when across the street,  when an older man going from the drugstore to the parking lot suddenly fell over backwards into the street," writes Gach in an email. "Immediately, two passersby stopped and went over to him. Then two more arrived, and soon all four were helping him up. Then [they] stayed to make sure he was alright."

He continued, "The scene provided a clear mirror of an essential truth in life: we don’t have to manufacture compassion; we uncover it through action."

5. Calvin Murphy from Ocean City, New Jersey, had an altogether transformative experience with his Uber driver.

Murphy wasn't in a great mood when he was taking an Uber in Philadelphia for work. There was traffic and it was raining, and he wasn't initially pleased with his driver, who seemed too tired for conversation.

However, an unexpected literal roadblock changed everything.

The storm had blown a giant tree branch into the road, and it was blocking one of the lanes, causing a major backup.

"As we approach the road block, I noticed my driver wasn't even looking to switch over to the left lane," writes Murphy in an email. "Instead, he drives right up to and stops in front of this giant tree limb — maybe a foot thick, 15 feet long, with all sorts of branches and leaves coming off of it —  puts the car in park, gets out, and in the absolute pouring rain, pulls the branch over to the side of the road, opening the road not just for himself but for everyone else behind him."

Murphy continues, "And get this — when he gets back into the car, soaking wet, he apologizes to me for getting out and hoped that it didn't make me uncomfortable, and then THANKED ME, saying that because of my patience, all those people behind us will get home to their families sooner. "

The experience made him take a deeper look at all the things people do for each other that often go unnoticed.

While they may seem extraordinary, these altruistic experiences are anything but.

People go out of their way to show kindness to strangers every single day all over the world. You may not always see them or be aware of them (as Murphy noted), but that doesn't mean they aren't making someone's life better.

What act will you add to the altruism ripple effect?