In a world that wasn't safe for LGBTQ people, a play in a leather bar changed the game. 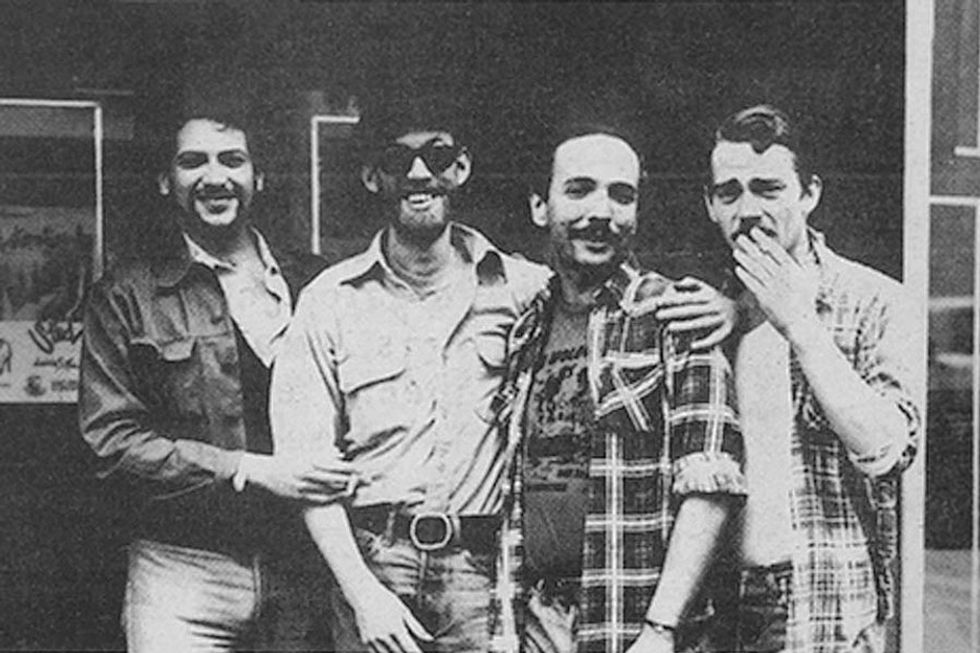 1977 was a risky time for a play about fighting back against gay bashing. But that didn’t stop Allan B. Estes.

To pull off Doric Wilson's play, “The West Street Gang,” Estes had to work with what was available — and in the '70s, that wasn't much.

Estes was a playwright and a young gay man living in a time when politicians like Anita Bryant openly insulted gay folks and violence against LGBTQ people was all too common. The world wasn’t exactly welcoming his vision for a creative space for queer people.

He also didn’t have a theater to work in. So he decided that his production of “The West Street Gang” wasn’t going to be just set in a leather bar, it would also be performed in a leather bar.

Described as “a queer bar farce about sitting down for drinks and standing up to oppression,” the show was a huge success.

It was so successful, in fact, that Estes got enough recognition to help him produce more plays.

And he soon secured a downtown San Francisco location to open something that didn’t exist but was sorely needed: a theater dedicated to art by and for queer people.

Theatre Rhinoceros filled a huge need as a space that reflected the lives of LGBTQ people who were invisible in mainstream arenas.

“In 1977, there was no queer representation,” says current executive director and artistic director John Fisher. “There was just really nothing where queer people could see their lives portrayed. And so it was very important that there was a place where they could go and see plays.”

With founder Allan B. Estes as the first artistic director, Theatre Rhinoceros began producing plays exclusively for gay men. A few years later, Estes opened the company to include lesbians, paving the way for the theater’s current content, which continues to expand to represent more letters in the LGBTQ+ rainbow.

Among the early performances were works by noted playwrights, including Harvey Fierstein, Terrence McNally, Adele Prandini, and many more.

He was one of the many lives lost to the HIV/AIDS crisis of the 1980s.

The AIDS epidemic devastated the community of artists and audiences that came together at Theatre Rhinoceros. They lost leaders, actors, and loved ones. “This disease almost destroyed the theater,” Fisher says.

But, through unfathomable pain, Theatre Rhinoceros carried on.

The company members kept doing what they did best: providing visibility, safety, and love for their community.

In fact, the same year as Estes’ death, the company premiered “The AIDS Show: Artists Involved with Death and Survival.” It was the first play in the U.S. to address the AIDS crisis.

National attention followed, including a PBS documentary with Academy Award-winning directors and a tour of “The AIDS Show” around the United States.

This attention was crucial. Victims were rapidly dying of AIDS without knowing why, and their communities were terrified. Theatre Rhinoceros helped give its community representation on the big stage and educate huge audiences about AIDS.

Today, resilience through art continues to shine in the spotlight at Theatre Rhinoceros.

In August 2017, the theater celebrated its 40th anniversary with a staged reading of “The West Street Gang.” After all, their very first play's theme of resistance through struggle remains relevant in new and evolving ways.

While there are more queer theaters now than in 1977, for instance, many have shut down in recent years as their neighborhoods become less and less affordable for these theaters and their actors.

André San-Chez and Charles Peoples III in "The Legend of Pink." Photo by Steven Ho/Theatre Rhinoceros.

And they are continuing the tradition of reflecting contemporary LGBTQ lives.

One recent show, “The Legend of Pink,” received rave reviews for its story of a black transgender woman who was once one of the 40% of homeless youth who identify as LGBTQ. The Rhino’s current show, “Transitions,” is a witty take on being queer during the Trump presidency.

And, in spite of the risks of covering such touchy topics, The Rhino has reached wide audiences and touched an abundance of lives.

The Rhino’s lasting legacy reminds us of why representation is so meaningful for LGBTQ communities.

Whether faced with a devastating epidemic or hateful politicians, queer artists have always looked out for their communities. When they had nobody else to help them survive violence and grief, Estes and his company turned to their own creative power to build hope and visibility.

Art like the Theatre Rhinoceros’ helps us reach each other, express ourselves, and send our stories into corners of the world they’ve never seen before.

These artists prove that we have the tools for change right at our fingertips.

Every murder of an innocent person is tragic, but the cold-blooded killing of a child is too heinous to even think about. So when a man walks up to a 5-year-old riding his bike in broad daylight and shoots him in the head in front of his young sisters, it's completely reasonable that people would be horrified. It's an unthinkable and unforgivable act.

His murderer—Hinnant's dad's next door neighbor, Darius Sessoms—deserved to be rounded up, arrested, and charged for the killing. And he was, within hours. He deserves to be punished to the full extent of the law, and history indicates that he assuredly will be. The system is working exactly as it's supposed to in this case. Nothing can be done to bring Cannon back, but justice is being served.

So why is #SayHisName trending with this story, when that hashtag has long been used in the movement for Black Lives? And why is #JusticeForCannon being shared when justice is already happening in this case? Why is #ChildrensLivesMatter a thing, when there's never been any question that that's the case?

Tattooing, like any other skill, requires practice. The problem is, how do you practice permanently putting a nipple on someone else's body?

This genius tattoo artist found a solution. "Shannon McCauley gives out free tattoos to the people who volunteer their bodies to help her practice tattooing nipples.

McCauley is a tattoo artist at Steadfast Tattoo in Rochester, NY. She went absolutely viral after tweeting a photo of a leg with a nipple with the caption, "Tattooed my first nipple on skin. I'll be covering this tattoo for free once it's healed. I'm learning this so I can tattoo in surgeon's offices and help breast cancer survivors that had mastectomies."

She later said she'll also use this skill for people in the trans community. Simply amazing. You can visit Shannon's instagram to see even more photos of nipples tattooed on legs.

Tattooing is very common for people that have gone through mastectomies because surgeons can only do so much in terms of pigmentation. Tattoos on the hand have a practically infinite range of shade and color. Artists like Shannon are necessary in helping people through the recovery process.

From Your Site Articles
Related Articles Around the Web
best of humanity
Get stories worth sharing delivered to your inbox
By signing up you agree to Upworthy's privacy policy.
Trending Topics
Trending Stories
black lives matter