I didn't respect my dad's job as a janitor. This is what I would tell him now.

Today she's proud to be a janitor's daughter, but she didn't always feel that way. 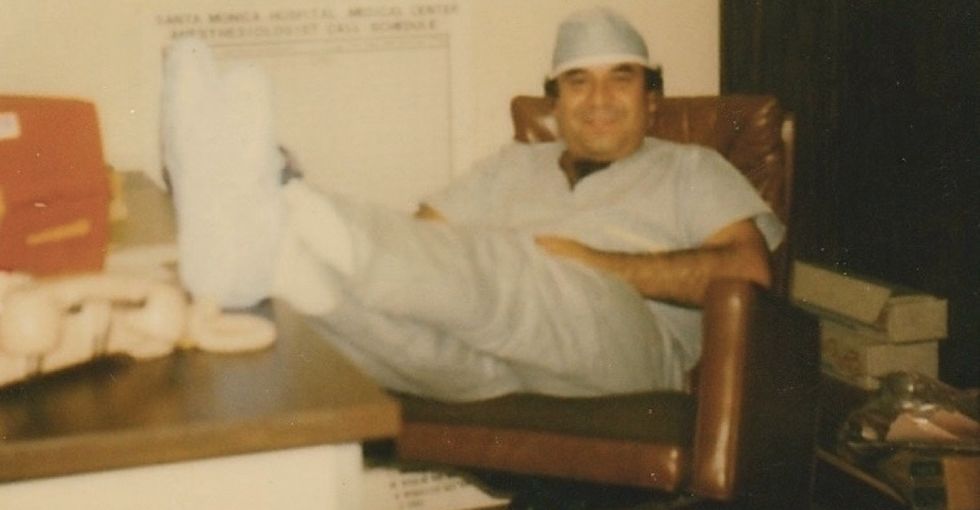 Argelia is a 39-year-old Mexican-American mom of two. She works as a training coordinator in Los Angeles, has a great family, and is known to wake up with a smile every day.

She gives a lot of credit to her late dad, Angel, though, who taught her the value of hard work and sacrifice. Her only regret is it took her a while to realize what he provided for his family. This is her story as told to Upworthy.

All photos provided by Argelia, used with permission.

Parents often say to their children, "You'll understand when you have kids." I never got that before, but now, in my case, I feel like that's very true.

Only a parent can understand the sacrifice you made to leave my mom, me sister, and me in Mexico to come work in the United States. As a 2-year-old, I didn't understand why you weren't with us. You were that faraway mystery — "my dad" — the wonderfully sweet man who would call me before bedtime to say, "good night."

I remember standing in my mom's room around all of your clothes asking: "Do you think he misses me? Do you think he likes me?" I thought about you all the time. You were a larger-than-life hero in my mind.

Two years later, when we finally moved to the United States to be with you, I found out that you were everything I had imagined, and many things I had not.

A young Argelia spending some quality time with her dad.

I didn't understand why you were always working. You left for work every day as soon as I got home from school and returned after I was already asleep. You even worked on weekends. To me, you were still the mystery that I thought about so often while in Mexico.

But instead of trying to figure you out, I just went with the flow. Being from another country, I focused on fitting in with everyone else instead, and that went on for a few years. But things got real once my classmates started sharing what their parents did for a living.

"My parents own a business," another said.

That's when I went home and asked you what you did for a living, and you told me that you were a janitor at a hospital. I was devastated.

I heard how the kids joked with each other at my school by saying, "You're going to grow up and be a janitor."

As if that was the worst thing a person could become.

At that point, I realized there was absolutely no way I was going to tell my friends that my dad was a janitor. I avoided the subject for as long as I could before I finally created the lie that you were a scientist. My friends were impressed, but they had no idea how empty I felt inside.

It wasn't until high school that I started caring less about the opinions of others and more about the great man you were.

I learned that many of the same classmates, with dads who were doctors and lawyers, told stories of how these men verbally and physically abused them, abandoned them, and ignored them.

What is a parent's love, anyway? In my heart, I learned that it meant sacrifice, hard work, patience, and knowing that you would do anything for our family.

For so long, I didn't give you credit for being the man you were and for all of the things you did for us — without fanfare, without complaint, and without rest. You did these things to establish yourself in this country, to find a home in a nice neighborhood so that my sister and I could have a good education and pursue our own dreams.

But by the time I realized all of this, you were gone.

Three months before I turned 18 and one year before I became an American citizen, you died after a tragic accident. You weren't there to witness everything you had hoped for me coming to fruition.

Now, I work in the same hospital that you worked in so tirelessly for all those years.

I walk the halls and wonder if some of the faces I see were faces you saw. Because of that, I always make sure to smile and say hello to everyone — from the friendly people to the ones who just walk by without giving me a second glance. I do it because I know that's what you would've wanted.

I've never forgotten the lessons you taught me — lessons you probably had no idea you were teaching me.

Those lessons changed my life.

Argelia with her two kids, Natalia and Sebastian.

When I became a mom, I promised myself that I would pass on those lessons to my kids.

Hard work, humility, and most importantly, to place more value on a person's heart instead of their clothes, their houses, their cars, or their job titles.

Speaking of job titles, today I am proud to say that I'm the daughter of a janitor because you embodied everything that I know to be good in this world.

When my daughter graduates from high school this June, Dad, you will be in my heart, and I will take immense pride in knowing that the lessons you taught me are alive in a new generation.