They saw refugees sleeping in tents. So they made them a home.

Thousands of refugees got stuck in Athens, but anarchists came to their rescue. 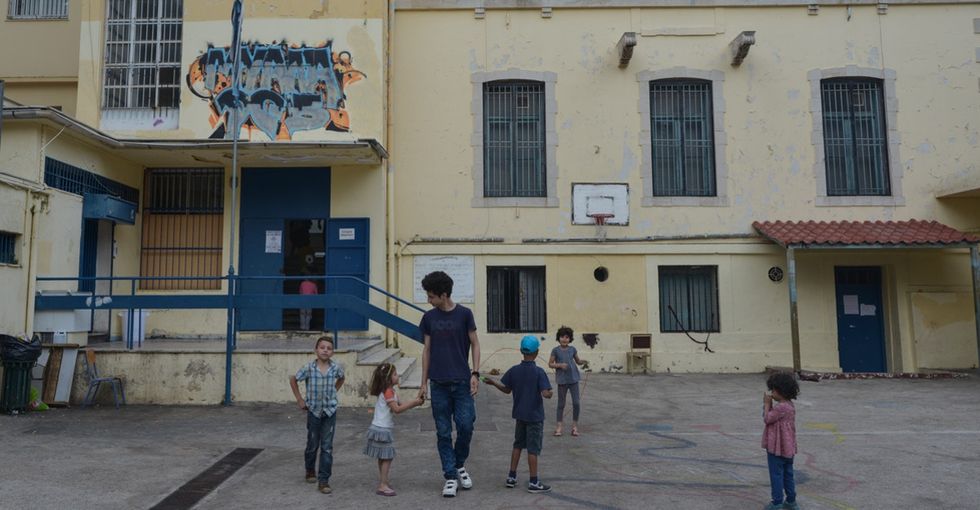 When Germany opened its borders to refugees during the summer of 2015, the flow of migrants moving through Athens turned to a flood.

Hundreds of thousands of people — mostly Syrians — passed through the city, usually leaving in a few days or weeks. Then, in March, the borders closed.

Now, around 10,000 people are stuck in Athens, unable to continue their journeys. Some live in hotels, but most have run out of money. They sleep in tents at the port, at an abandoned airport outside the city, or sometimes even on the street.

But in one of Athens’ bohemian neighborhoods, Exarchia, activists and artists have decided to help, using a resource they have plenty of: empty buildings.

“Squats” in Athens date back to the late '80s, when anarchists began setting up communal homes in abandoned buildings. They've since become something of a Greek tradition, accompanied by a community of people who know which buildings you can occupy without getting kicked out and how to set up electricity and plumbing.

Abeer, 40, arrived in Greece two months ago. Half of her family is in Leipzig, Germany. Here, she teaches refugee children English in a squat. Photo by Marcos Andronicou, used with permission.

Each squat is run by its own assembly, which usually makes decisions by consensus. They share a left-wing outlook and an anti-fascist attitude (something that means a lot in a country where a real fascist party, Golden Dawn, holds seats in parliament!)

In January 2016, when the borders began to close and more people were trapped, Athenians set up these squats to take in refugees.

The economic collapse of 2009 left more buildings available, so the first building to be occupied in 2016 was a former government building on Notara Street.

Activists cleaned up debris, fixed some plumbing, and welcomed the refugees most in need: families. The building now houses about 130 people, most of them women and children. In a classroom downstairs, children’s pictures show scenes of war and hopeful images of their future homes, and a big whiteboard shows a chart for the week’s chores. In a kitchen upstairs, a group of women are preparing food for the next meal while one floor up, men install another shower.

“Greeks have been refugees in many places,” said Phevos Simeonides, a young Athenian who’s involved with a bunch of different squats. “So even though there are some who are hostile to refugees, most have an instinct for solidarity with them.”

The founder of one squat feels this solidarity especially strongly: He’s Syrian himself.

Kastro Preta Dakduk, a painter, came to Greece 28 years ago from Syria. When the refugee crisis hit last summer, Kastro worked on the islands and in the port of Piraeus. At the makeshift camp at the port, he saw people with no money and no place to go, living in tents. Then he heard about an old school that had been abandoned for two years.

Children play in the formerly abandoned high school in central Athens, which has been transformed into a refugee hosting center by an autonomous group of volunteers and activists. Photo by Marcos Andronicou, used with permission.

“In Syria, where fights and war were happening, the schools were open for all the people to find a shelter,” he said.

So they chose this school to set up in. Squats are technically illegal — they usually haven’t done paperwork and don’t pay rent. But the Greek government generally leaves them alone because it’s so overwhelmed with refugees that they’re glad to have the help.

“We asked the municipal government about the school,” he said, “and they said no. We said, 'Thank you very much,' and the next day we came here.”

The four-story school was one of the biggest buildings in the city, and getting it ready for the refugees took a lot of hard work.

The water was on when they moved in, but the sewage line wasn’t connected, so for days they couldn’t use the showers or toilets and had to move porta-potties into the yard. But now the squat is working at full capacity, with 350 people living there, including 150 children.

One of the mottos of the squats is “self-organization,” which means that instead of taking orders from Greek organizers, residents do most of their own work.

This is important because it means that refugees get the chance to use their skills and training again.

Hamd, a 26-year-old from Damascus, has a degree in hotel management. As soon as he got to the school, he started working in the kitchen. At first, there was no working oven and few supplies, but piece by piece, he and Kastro got the equipment they needed.

Now the kitchen has six seatings a day, with a morning, afternoon, and night shift, and it goes through 22 kilograms of rice per meal, just for starters. When I was there, dinner was spicy chicken with rice and salad.

“Greeks have been refugees in many places.”

Hamd’s friend Hussein works in information technology in Syria, and at the school, he’s working to set up the Wi-Fi network. There’s even a security detail: three patrols per night with two people each to look out for smugglers or drug dealers.

The school building has come back to life – and it has turned back into a school, too.

Fatima, who was an Arabic teacher in Syria, teaches class every day from 5-7 p.m., and volunteers teach English classes as well. With little space inside, classes are often held in the courtyard, where students sit in neat rows, taking notes.

Abeer teaches Syrian, Afghan, and Iraqi children. She has Palestinian heritage but was born and grew up in Damascus. Photo by Marcos Andronicou, used with permission.

Other times it looks like recess, with younger kids running around and older ones playing basketball or leaning up against the wall and talking.

It’s still far from perfect. It’s hot and crowded, and few of the refugees know when, or if, they can get to Western Europe. But for now, the school is a welcome refuge.

“In other camps, it’s very bad,” Hamd told me. “No electricity, nothing. In this place, we can feel safe.”