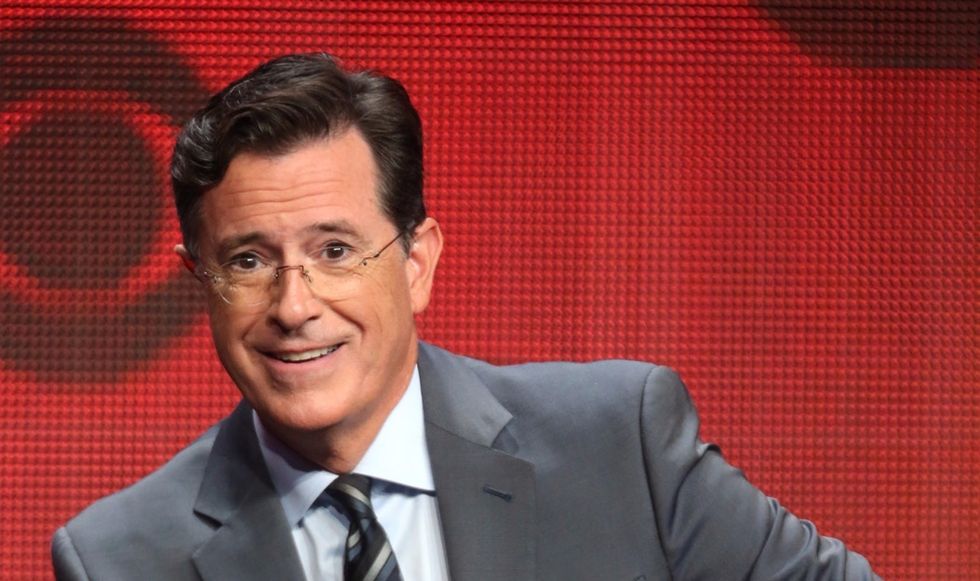 Stephen Colbert is a busy man.

He's an honorary doctor and pistachio pitchman, and he knows his way around a Christmas carol. Not to mention that whole "taking over a late-night dynasty" thing, which is already off to a great start.

But despite his schedule, Colbert is never too busy to support and encourage students.

Whether it's as a commencement speaker or talking with kids in the classroom, Stephen Colbert is an enthusiastic supporter of all things education, as you'll see in this charming video from DonorsChoose.

Colbert is a big-time supporter of DonorsChoose, an online charity that helps teachers purchase supplies for their classrooms. Public school teachers can make requests (anything from a new reading rug to a microscope) and anyone can donate to the project. Donors receive photos of the new supplies in use and letters of appreciation from the students.

In 2013, unbeknownst to the general public, Colbert broke character and visited P.S. 33, an elementary school in New York City.

There, he gave a brief lesson on satire to an eager group of third-graders.

Before he left, the students serenaded Colbert with a musical rendition of the preamble to the Constitution.

The late-night funnyman beamed with pride, then joined in himself.

It's endearing. It's patriotic. And lucky for us, someone recorded it. The just-released video is proof that Stephen Colbert is every bit as awesome as you hoped.

But his generosity doesn't end there. Colbert donates his money, time, and star power to help out public school teachers, too.

Considering educators spend an average of $513 of their own money on supplies for their classroom each year, every little bit helps. But when it comes to Stephen Colbert and education, little is not in his vocabulary.

Shouldn't these students have more than one book? Stephen Colbert thinks so. Photo by iStock.

When Colbert ran for president in 2007, his supporters helped him raise $66,000 for classrooms in his home state of South Carolina. He encouraged Barack Obama and Hillary Clinton supporters to pony up for their candidate, and they did. Over 2,600 donors contributed more than $190,000, funding projects for 42,000 students!

"It's incredibly personal, the relationship."

Since then, he's raised money for children with parents in the military and contributed funds from his super PAC to teachers and classrooms devastated by Hurricane Sandy.

And in a surprise move this spring, he picked up the tab on every single open project on DonorsChoose in South Carolina. It was an $800,000 endeavor, which Colbert paid for with the sale of his "Colbert Report" set and a little help from some generous donors.

Colbert meets fans and supporters at a rally in Charleston, South Carolina, as part of his pseudo-presidential run in 2012. Photo by Richard Ellis/Getty Images.

Colbert knows it's all about the kids.

He now sits on the board for DonorsChoose, and in a recent interview on "CBS Sunday Morning," he shared why the organization means so much to him.

"The joy of giving is also matched with something really rare, which is precision. It's like passion and precision at the same time. It's incredibly personal, the relationship. And incredibly moving when you get the thanks back from the kids."

As Colbert shifts from a late-night character to a bona fide host, I hope he hangs on to the charm, enthusiasm, and generosity that make him such a joy to watch. I have no doubt he will.

For now, brush up on your American history and enjoy this delightful number from the students at P.S. 33 and American hero Stephen Colbert.