His quest for an organ donor went viral. Now, he wants to start a 'kidney revolution.' 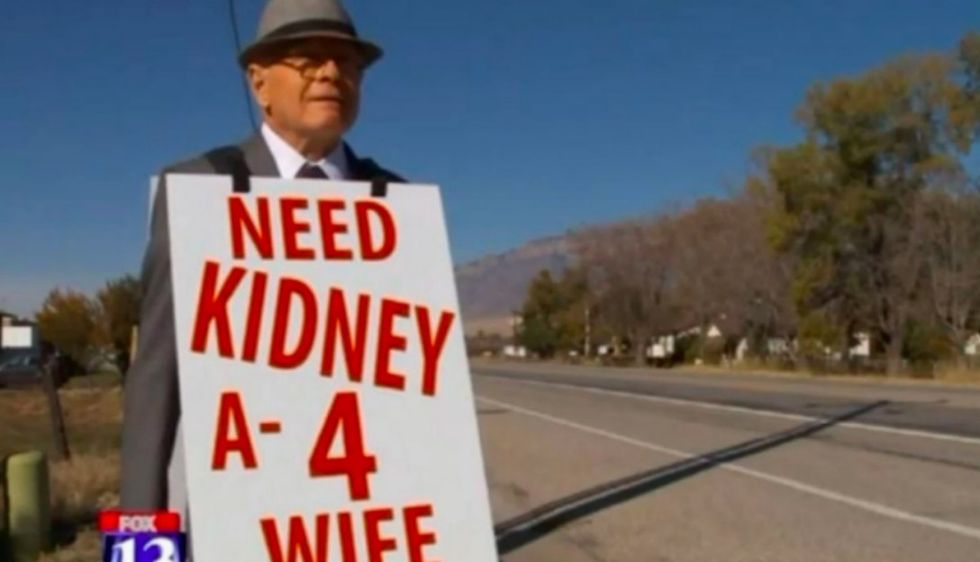 Wayne Winters literally went the distance to help save his wife's life.

When Winters learned his wife Deanne had Stage 5 kidney failure, he knew their time and options were slim.

So, in the fall of 2017, Winters literally strapped a sign onto his body that read, "Need A Kidney 4 Wife" and began walking the streets of Farr West, Utah, hoping a potential donor would take notice.

After weeks of walking miles a day, his story began to go viral. The couple finally found a donor in November 2017 that will potentially help Deanne live a longer and healthier life.

"I was just so overwhelmed," Winters said after receiving the news from the hospital. "I didn’t know what to think."

The story could have ended there. But Winters is now using his story for the greater good.

After his story went viral, he decided to bring attention to the larger issue.

An onslaught of generous messages from strangers "filled my phone up," he said. "I'm sitting here with this full phone." Winters received more than 800 calls from potential donors as news of his walks began to make news.

But he knows that's not how the story ends for others in need of similar help.

More than 100,000 people in the U.S. alone are currently awaiting a potential kidney donation, with the average person waiting 3.6 years before a donor is found.

Winters says even though his wife's life was saved, he's now committed to the larger cause of raising awareness and helping others find donors of their own.

"I will spend more of my days walking with my sign to see how many I can get," he said. "Think about it, we could start a kidney revolution, and that would be so great."

Their story shines a light on the need for more organ donors.

The story of Deanne and Wayne Winters went viral for good reason — his commitment to her was inspiring and it ultimately has a happy ending. But the larger story of those needing an organ donor is often heartbreaking.

There are many ways to get involved beyond literally donating your own organs. The National Kidney Foundation has a page dedicated to advocacy about kidney disease prevention.

Wayne Winters did an incredible thing for his wife. But it's the donors, and those who support them, that ultimately make the real difference. And that's something worth celebrating.