His demand to be listed on his husband's death certificate could make gay marriage legal everywhere.

Sometime in June 2015, marriage equality might become the law in every state. 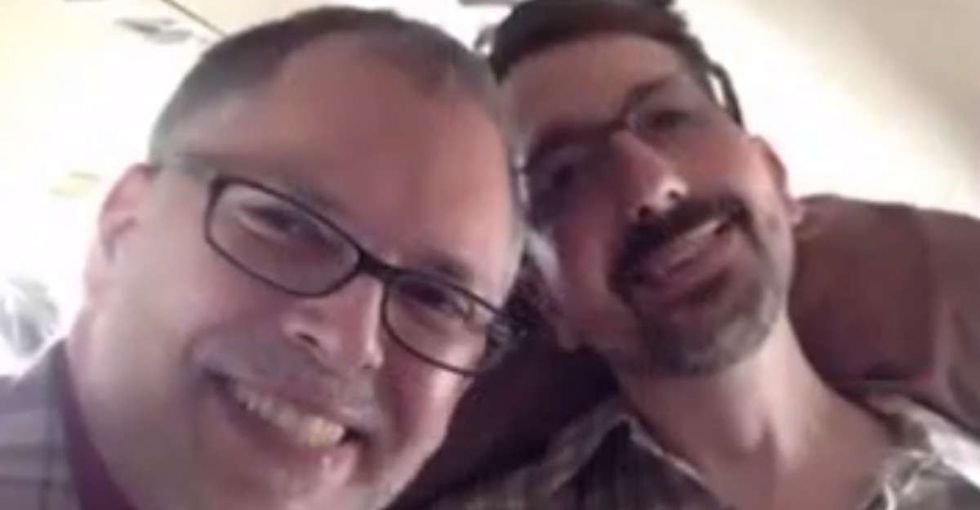 It all began with a heartbreaking request.

On April 28, 2015, the Supreme Court is set hear oral arguments in Obergefell v. Hodges, the case that could finally make gay marriage legal nationwide. All because the state of Ohio refused to honor Jim Obergefell's wish to be acknowledged on his husband's death certificate.

Jim and his husband John Arthur started dating in 1993. John was Jim's first serious boyfriend and, it soon became clear, the love of his life.

They had been together 18 years when John was diagnosed with ALS, also known as Lou Gehrig's Disease.

Both Jim and John knew that John didn't have long to live and wanted to be married before John passed away.

The problem was, gay marriage wasn't legal in their home state of Ohio. But they knew they couldn't let that stop them (emphasis added):

"Obergefell and Arthur devised a plan that July: With $13,000 raised through family and friends, the pair chartered a medical Learjet to Maryland, where they could be legally wed on a Baltimore airport tarmac.

They were finally married, but their home state still didn't recognize their marriage.

They both knew time was running out. So Jim took the state of Ohio to court to try and force them to list him as John's husband on the documents that certified John's death.

But, sadly, John passed away before the case could be resolved.

Joined by three other plaintiffs from Tennessee, Kentucky, and Michigan, Jim is asking the Supreme Court to order Ohio to recognize his marriage.

This is, by far, the most important marriage equality case to date.

Even more important than the two landmark cases the Court has addressed in the very recent past.

In Hollingsworth v. Perry, the Court dismissed anti-gay groups' defense of California's Prop 8 due to lack of standing (basically, a fancy way of saying that the people who wanted Prop 8 to stand have no reason to care who gets married to whom and should butt the hell out) and re-legalized marriage in California.

In United States v. Windsor, the Court struck down Section 3 of the federal Defense of Marriage Act, which paved the way for the wave of circuit court rulings that made gay marriage legal in 37 states.

But there's a strong chance that gay marriage will become legal everywhere if Jim and the three other plaintiffs prevail.

Which, in the immortal words of the vice president of the United States...

...is a big (bleeping) deal. For millions of Americans.

And if the Supreme Court finally makes marriage equality the law of the land, it will be thanks to the efforts — some big and obvious, some small and unseen — of thousands of people over the course of three decades.

But the fight will end fittingly...

With one man's commitment to honoring the person he loved.