He's been at it for 50 years, but this scientist still says tornadoes can save us.

Is he on to something big or just crazy? 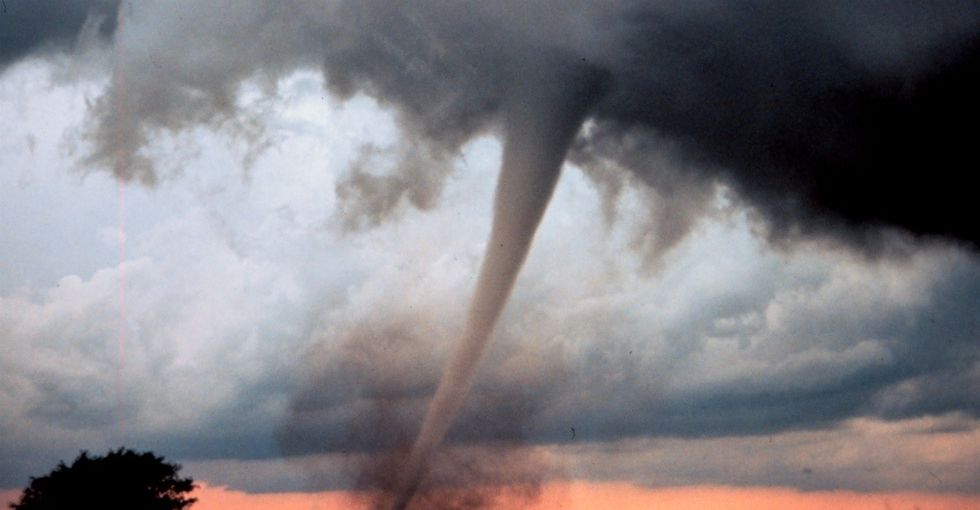 How long would you work to create something, even if lots of people told you it couldn't be done?

Louis Michaud has been working on his project for 50 years. He believes it's possible to harness tornadoes to generate electricity.

Michaud is trained as an engineer. He's been working away (mostly in his basement and garage) for years and most of that time without any outside support. Flora Lichtman and Katherine Wells interviewed him about his invention for a series they're doing on ways people are responding to the challenge of climate change.

"We don't like to use the word tornado because it scares people," Michaud says. He calls his invention the Atmospheric Vortex Engine.

A vortex is created by heating air, which rises and pulls in more air tangentially at the base of a circular wall. The heat source can be solar energy, waste industrial heat, warm sea water, or simply warm humid air. The electrical energy would be produced by the incoming air flowing through turbogenerators located around the periphery of the station.

In 2012, Michaud won a $300,000 Breakout Labs grant (funded by Peter Thiel, a co-founder of PayPal) that allowed him to build a prototype. He has succeeded in creating tornadoes. But they've been unpredictable. Detractors (and there are plenty of them) say things like it'll take more energy to produce the tornadoes than they'd make and that horizontal winds will prevent the tornadoes from forming.

"Once you get the realization that something is possible, something that could really improve our lives, I would consider it treacherous to abandon it." — Louis Michaud

Plenty of scientists and inventors labor in obscurity for years (here's a fun list). Only a few of them accomplish major celebrated breakthroughs, and that can take decades.

Galileo's idea that Earth revolves around the sun (instead of the other way around), for example, led to the 16th century controversial astronomer being accused of heresy, and he was forced to endure house arrest for the rest of his life. Barbara McClintock published about "jumping genes" in the 1950s, but her work was not understood or accepted by other scientists for 20 years. She finally received the Nobel Prize for Physiology or Medicine in 1983 (the first woman to win that prize unshared). Swiss physicist Fritz Zwicky wrote about dark matter and neutron stars in the universe in the 1930s and 1940s, but his discoveries were considered outlandish for 40 years.

I certainly hope so. While harnessing tornado power might seem outlandish, Michaud's ideas are in good company. Hydro, solar, tidal, and wind energy all use the energy of nature to drive machines — and they are the best thing we've got going to help us kick our fossil fuel habit.

Three cheers for the mad scientists!