He couldn't play in a normal treehouse, so Make-a-Wish made him one of his own. 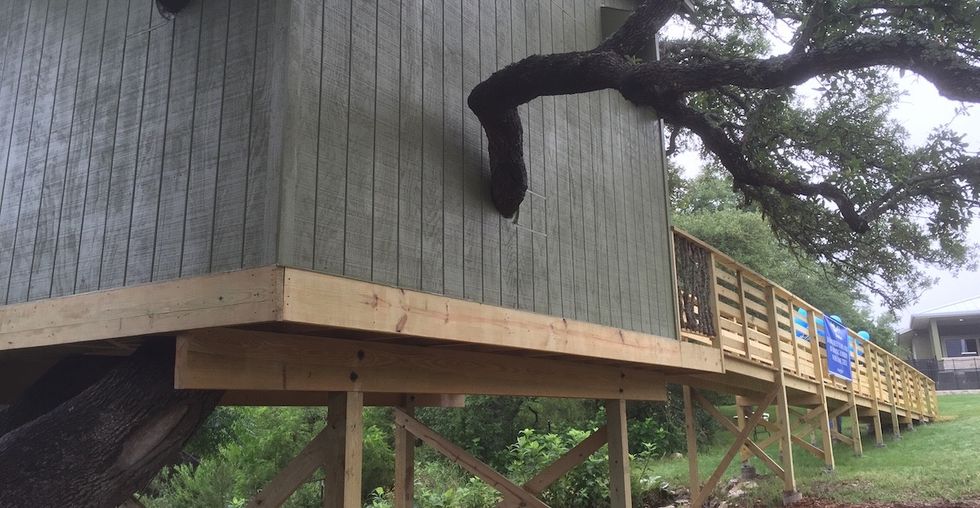 7 year-old Hayden Trigg has used a wheelchair for his entire life.

It's a big battle to fight.

But even though he's faced more adversity than most adults, Hayden is still a kid. He loves planes. And he loves trains.

After watching an episode of Discovery Channel's "Treehouse Masters," he fell in love with treehouses, too.

It didn't look like playing in a treehouse fort was something Hayden was ever going to be able to do, though.

That is, until the Make-a-Wish Foundation and its partners stepped in.

His family reached out to Make-a-Wish to see if there was any way they could help.

Last year, they found out that, amazingly, Hayden's wish was going to be granted: He was getting a treehouse.

“He spent months in the hospital last year — three months,” mother Adrienne Trigg told The Statesmen. “Everywhere we’d go, he’d tell people, ‘I’m getting a treehouse built for Make-A-Wish.’ It was something to look forward to and a distraction."

On May 17, the treehouse was finally finished. And Hayden's entire first-grade class came by to help him break it in with an epic pizza party.

Pretty soon, the treehouse was swarmed with kids, including a beaming Hayden.

Rob Soluri, the owner of Austin Tree Houses, said the structure was a $50,000 project. He told Upworthy it features two stories, a 65-foot ramp for Hayden's wheelchair, posters of Hayden's beloved trains and planes on the wall, and a bucket and pulley for hauling toys up into the second-floor loft.

"It was the best day of his life," Hayden's mom told "Good Morning America."

Even though the treehouse was built just for him, his mom says the long, wooden wheelchair ramp is still a struggle for Hayden.

Wheeling himself up to the house to play is a challenge. But it's a challenge he's tackled head-on as he continues physical therapy.

Cheers to Hayden for fighting for his right to be a kid, and to all the incredible heroes standing diligently in his corner.