Glass cars, sentient spoons, and an inventor who's challenging our idea of normal. 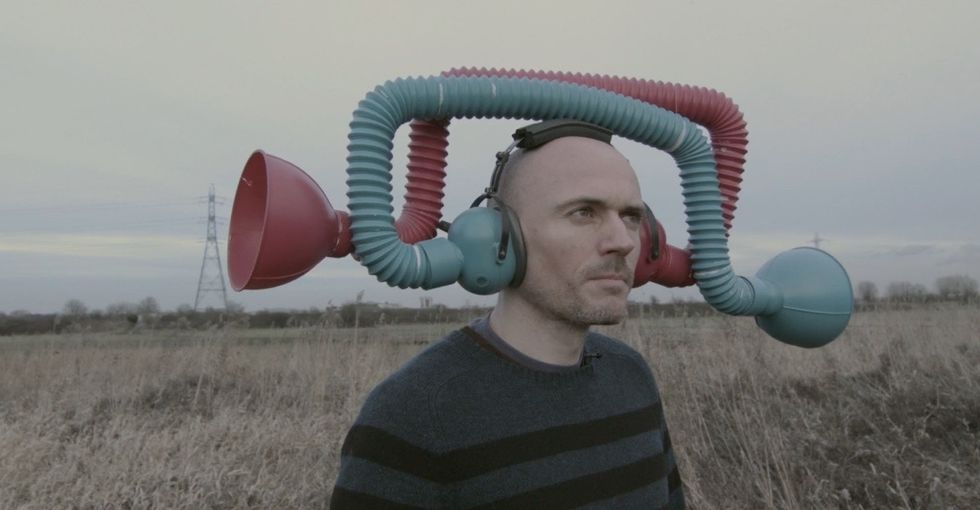 Many designers create products that are normal but better — or "super normal," as a Japanese design philosophy calls it.

The results are often playful and humorous, like a tummy-rumbling amplification device:

Wilcox explained why playfulness opens up the creative process in an interview for design publication Cool Hunting:

"Sometimes there’s a temptation to think, 'What does it do? How do we sell that?' That closes the idea down. I try to keep it open and push it as far as possible. It’s about playfulness, open-mindedness and taking risks, the freedom to make mistakes, whatever they are."

Many of his playful inventions are actually kind of useful.

It's not all tummy-rumbling amplification devices; many of Wilcox's inventions are designed to solve minor inconveniences with whimsical solutions.

All images via Dominic Wilcox, used with permission.

Shoes that light up to point you in the right direction using built-in GPS navigation:

Stickers to make your shiny car or bicycle look like junk to would-be thieves:

A spoon that "wakes up" as you eat with it, then "loses energy" and goes to sleep after four hours to let you know it's time for a snack:

A teacup with its own mini cooling fan (sadly, this one's only a prototype):

For Wilcox, it's about playing with our idea of "normal."

At last year's London Design Festival, Wilcox showcased his invention for the future — a future where our roads will be so safe that cars could be made of glass. He created a driverless car prototype with colorful stained glass that includes a comfy bed nestled inside:

Passengers would simply relax or take a snooze in their beautiful car while they're safely whisked to their destination.

It completely reimagines what a "normal" driving experience could be. Wilcox mused to Cool Hunting:

"[In my imagination] the future is super safe, so why not have a glass car? Some people might think it’s ridiculous, but why not?"

Wilcox is even twisting what it means to be an inventor.

Stephen Colbert invited Wilcox to appear on "The Late Show," where he tested a number of Wilcox's inventions, including a cereal-serving head crane device:

GIF via "The Late Show with Stephen Colbert."

When Colbert asked Wilcox, "Are you a sculptor or are you an inventor? Because these things seem like conceptual art at the same time as being inventions," Wilcox replied:

"I just like being imaginative and creative. It doesn't matter how I express it. ... I've tried [to invent a word] many times. I did my business cards ... and underneath my name I [put] 'inventurer' — half adventurer, half inventor — but then I scrapped that one."

Here's to the "inventurer" in us all.