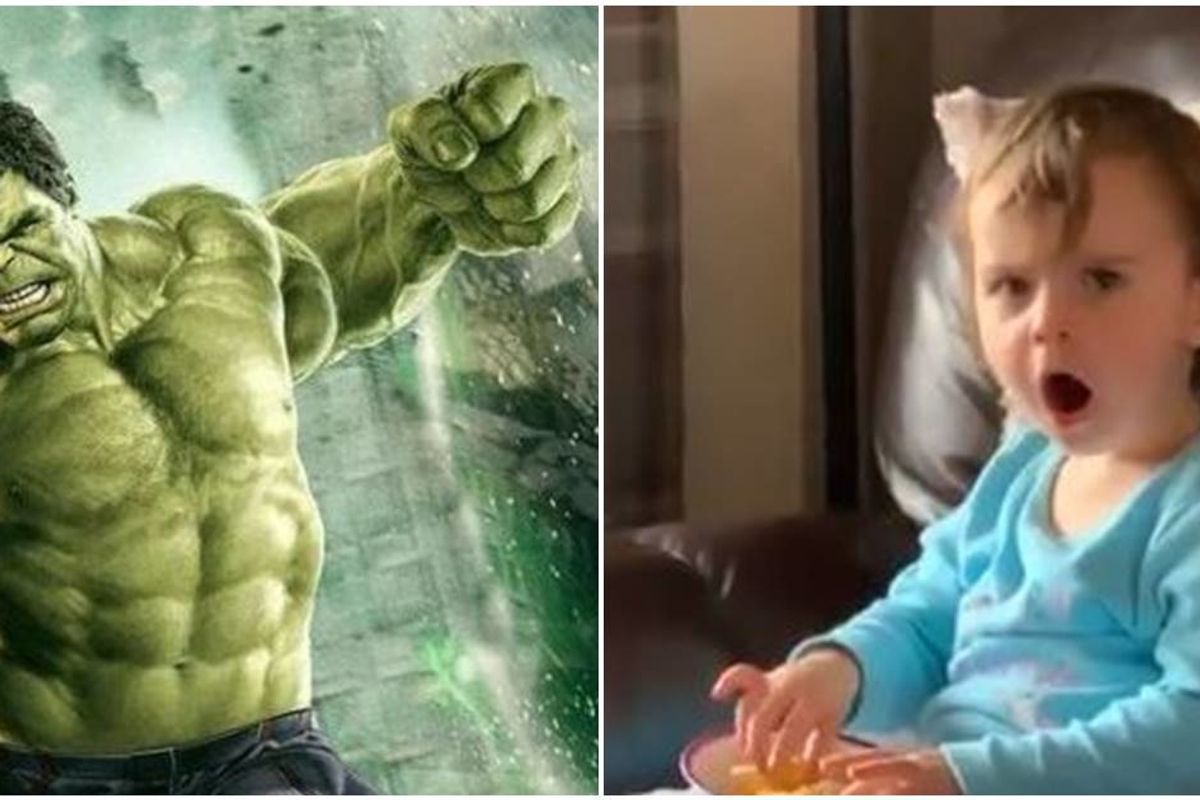 There are some moments in life you can never get back. Seeing the twist in "The Empire Strikes Back." Meeting your husband or wife for the first time. The first time you rode a roller coaster.

With the advent of social media, parents have been taking video of their children watching pivotal moments in pop culture to share their reactions. Irish comedian Paddy Raff filmed his two-year-old daughter, Clara's reaction where she saw Bruce Banner turn into the Hulk for the first time.

And we all know what happens when he becomes the Hulk, right? He smashes everything in sight.

He's unsure because his son was in charge of the remote control when the video was taken.

There are four elements that make this video adorable:

1. The way she wags her finger at the Hulk for being naughty and chastises him, "No!"

2. The Spider-man figure that's beside her as she watches the movie.

3. The way she moves between being enthralled by the movie but still has the presence of mind to keep eating.

4. Then there's the big look of pure shock.

The video is so cute that it even grabbed the attention of the man who plays Banner, Mark Ruffalo.

The Avengers are a big thing in this family. Clara loves playing with her brother's figures and feeds them breakfast when he goes to school.

This was her this morning feeding her #Avengers breakfast 😂🥰 pic.twitter.com/RtFhx0xulA
— Paddy Raff (@paddyraffcomedy) October 10, 2019

RELATED: Student aces her ninja history essay by turning in a deceptively 'blank sheet of paper'

The video has inspired some great responses on Twitter.

Me when my husband eats some of my food: pic.twitter.com/jF4kRcI0aE
— Tara VerMilyea (@TaraVerMilyea) October 10, 2019

Aww this reminds me of my now 17 year old daughter, who watched the first Hulk film at the same age and kept shouting
“Shrek is a bad man!"
— The Rain King_ (@therainking_) October 10, 2019

The cheese puff falling out of her mouth at the end makes this so relatable.
— Jennifer “A Piano Plays In An Empy Room" de Guzman (@Jennifer_deG) October 10, 2019

Love the way it only distracted her from the snacks for a few seconds ... she has her priorities right 😊
— Susan 🕷🇪🇺🇬🇧🇪🇸 (@DentTasker) October 10, 2019