From winemakers to neurosurgeons, these 15 former NFL players got a second chance and a new career. 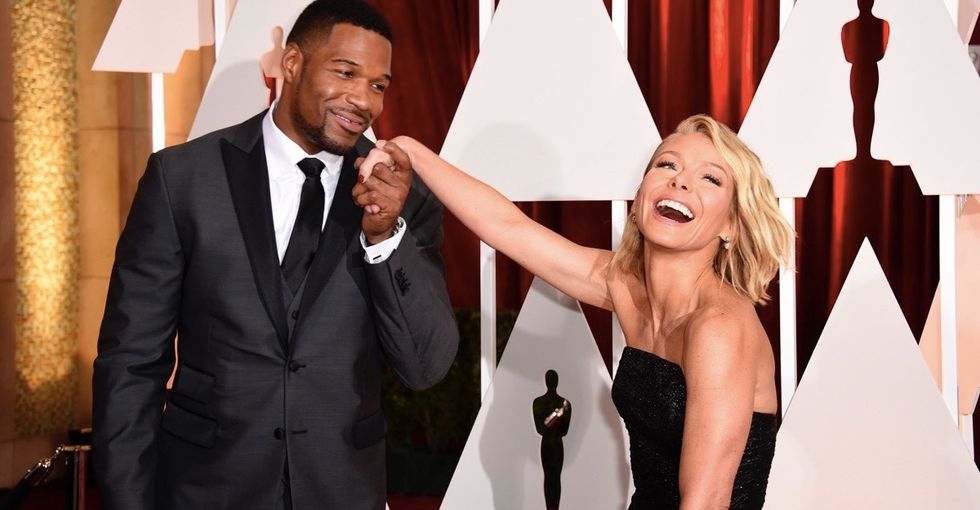 NFL players have it made, right?

You know, playing a game for millions of dollars, where you get to be financially stable for life?

The average NFL career lasts three and half years. And what comes after isn't always easy.

And this is one of GOOD gigs. Michael Strahan doing the left shark with Kelly Ripa for an episode of "Live with Kelly and Michael." Photo by Laura Cavanaugh/Getty Images.

Nearly 16% of former NFL players declare bankruptcy within 12 years of leaving the league. The truth is, pro football retirement can be a tough road; for some, it's even tougher than taking a hard hit when you're not expecting it.

Some former players have found a second wind after pro-football — although they're not all doing what you might expect. After all, there are only so many ESPN broadcasting or NFL head coaching jobs out there.

I'd sit down and share. Photo by NFL/Getty Images.

That's right, the former 11-season Jets and Giants outside tackle would rather talk it out than take you out these days. He's currently studying at William Paterson University in New Jersey, all in the name of helping other former football players and armed servicemen make healthy transitions in their lives.

From brining the pain to alleviating it. Photo by Jeff Zelevansky/Getty Images.

Rolle only had a short stint with the Titans in 2012 but still made history, being one of only three people to receive the prestigious Rhodes Scholarship and also play for an NFL team. He's currently studying at the Florida State University College of Medicine and also has found the time to establish the Myron L. Rolle Foundation, looking to help the underserved in health, wellness, and education.

Goldberg took a jackhammer to post-NFL challenges. Here in 2005 with his wife, Wanda. Photo by Kevin Winter/Getty Images.

Any list of retired NFL players would be incomplete without Goldberg. He has called his football days a "dream come true" despite being plagued by injury from 1990 to 1995. He wasn't a huge fan of wrestling at first, but after Sting and Lex Luther urged him into the ring, he never turned back.

Pyatt stretching before a game waaaaay back in 2004. Photo by Robert Laberge/Getty Images.

Yes, we've moved from professional wrestler to professional businessman. Pyatt found his new career after his use of sports supplements as a Colts wide receiver left his bones weak. The idea for MusclePharm was born, and now Pyatt has a whole new way to make millions.

He played for the Jets, but we won't hold that against him. Photo by Simon Bruty/Allsport/Getty Images.

You've probably heard of Barclays, the giant financial institution headquartered across the seas. Chrebet made his way to Barclays via Morgan Stanley — after his 11 years with the Jets as a wide receiver. These days he handles the rock on behalf of hundreds of clients, whose combined assets total around $1.5 billion.

From hauling in passes to hauling freight. Photo by Ronald Martinez/Getty Images.

This former tight end for the Bengals, Giants, and Cowboys took his never-give-up attitude into his post-NFL career. He started with a real estate company, which he was happy with — until the 2008 recession hit. After the crash, he ran a successful roofing company until he overheard someone telling him just how much contracts in the shipping industry go for. Now he owns his own freight company, which earned more than $1 million in its first year.

If we were handing out awards, Marino and Huard would no doubt get the Elegance Award. These two former Dolphin QBs (Huard was actually the backup QB to Marino) decided to open their own winery outside Seattle in 2010. Though the winery is neither Marino's nor Huard's main source of income, they're looking to get closer to profitability by 2017.

"It's all show business." Photo by Frederick M. Brown/Getty Images.

Performing under bright lights should be no big thing for George after playing running back for the Oilers, Titans, and Cowboys for nine seasons. His role as Billy Flynn in “Chicago" in January is just a new chance for him to shine.

The former middle linebacker for the Buccaneers and the Chiefs is no longer looking to stop drives, he's trying to start them. Randle purchased a Chevy dealership in southern Oklahoma in the hopes of having a "long-term" relationship with the community and made the official announcement in October, according to the Lawton Constitution.

Looking like a celeb as far back as 2007. Photo by Steve Grayson/NFL for Weber Shandwick (St. Louis)/Getty Images.

Levens took acting lessons while he played for the Green Bay Packers as a running back. He is known for his role in "We Are Marshall" and now as a leading role in "Madea on the Run," created by Tyler Perry. He also finds time to run a youth sports training and mentoring program called I Am Momentum, headquartered in Atlanta.

All aboard the "follow your dreams" train with Keith Fitzhugh. Photo by NFL Photos.

Fitzhugh made headlines back in 2010 when sports analysts thought he went off the rails and declined an offer from the New York Jets, instead choosing to work at Norfolk Southern Railway as a train conductor. Fitzhugh, currently a terminal superintendent, and Stanback, a running back for the Falcons in the 1970s, have had long and successful careers with one of the nation's oldest transportation companies.

Tony Nathan running in a little ol' thing called the Super Bowl, back in 1985. Photo by George Rose/Getty Images.

Our next ex-NFL duo are former Dolphins teammates who live in sunny Florida, holding court and hearing the cases of drunk drivers, robbers, and drug offenders, according to The Miami Herald. Newman, a former guard, offered Nathan, a former running back, a job as a bailiff after Nathan worked coaching stints at professional, collegiate, and high school level. Nathan accepted, and they've been keeping order in the court ever since, The Miami Herald reports.

It's all about the angles. Photo by Dave Reginek/Getty Images.

Another surprising career choice is that of Ricardo Silva, who played safety for the Lions and the Panthers from 2011 to 2013. Last year, he decided to join the ranks of Teach for America as a geometry teacher in a Washington high school. He recently told CNN that teaching is harder than football ever was.

Getting your morning started since 2010. Photo by Jamie McCarthy/Getty Images for Baby Buggy.

If you haven't heard of any of the players on this list yet, your waiting is over. Strahan's reasons for being successful post-NFL is better said by Strahan himself: “When you're a 20-something-year-old athlete and you're getting a six-figure check every week, you're not thinking about next week. You're not thinking, 'I'm going to be broke,' or 'I'm going to need another job.' But I'll tell you, there are a lot of broke athletes out there — I know plenty — and I didn't want to end up as one," Strahan told The New York Times.

In August, the former Steeler, Super Bowl MVP, and current NBC analyst opened a restaurant in Pittsburgh, called Table 86. Ward said he built the restaurant to create jobs and say thank you to the people of Pittsburgh, according to The Pittsburgh Post-Gazette.

These are inspiring stories. But not every player knows how to handle life after football.

Luckily, there are resources out there. One of those is NFL Player Engagement, an NFL department focused on the wellness of former and active players, which helps players plan for a stable — ideally prosperous — second career. This NFL department offers trade courses to help players become electricians, plumbers, or carpenters, and runs a program called Bridge to Success, which offers peer-to-peer mentorship in the transition out of the NFL.

Charles Way, a vice president at the organization and a former New York Giant Full Back, says it all starts at the beginning. “We want players to start preparing for retirement as soon as they walk through the doors as a rookie," he says.

In a world where watching heroes crash and burn is as enticing as the latest superhero blockbuster, it's refreshing to see people who meet the challenge — and rise above it.